11AM, a loud knock on the door. I pull the blanket over my head. Another knock. I wake up and slowly drag my feet to the door. I look at my watch and see it’s only 11. Damn. I went to sleep at 7AM after a long and winding poker game. After being stuck quite a bit, I managed to beat the rake and cooler the nits to get back to even.  Nothing will return the 10 hours I spent on the table, paid god-knows how much in rake and ‘enjoyed’ the constant smoking of my tablemates though. I open the door and see a smiley delivery man. I sign the sheet with my eyes half shut, grab the package and open it. SHIP IT HOLLA BALLAS! The cover screams over a bright yellow background. I put down the book and fall back into bed. 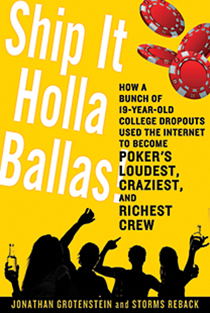 Ship It Holla Ballas! tells the story of a group of young, bright college dropouts who managed to make millions off of the poker boom following Chris Moneymaker‘s legendary WSOP Main Event win in 2003. Although the book uses the crew’s 2+2 nicknames and not their real names, any true poker fan, or just someone with access to Google, can realize that the book focuses on two online poker legends: Andrew “Good2CU” Robl and David “Raptor” Benefield. Through their eyes (as well as those of some other famous players like Phil “OMGClayAiken” Galfond and Tom “durrr” Dwan) unfolds the short history of online poker. And it’s told the right way – interesting, thorough and appealing to both poker enthusiasts and readers who think a “boat” is something you sail on. It correctly highlights the role of the poker community and the importance of the 2+2 poker forums.

Many chapters in the book focus on the crew’s antics and mischief – and there’s a lot of it. That’s what happens when 19-year-old kids suddenly have ridiculous amounts of money. Prepare for strippers, booze, drugs, and Rolexes. It can get a bit repetitive, and often your mind quickly shifts from “damn, this kid is crazy!” to “damn, what a douchebag!” It’s interesting to see how the different characters dealt with their sudden success, both in the book itself and in retrospect. Some of the characters stopped playing poker professionally despite making millions (most notably David “Raptor” Benefield who was considered one of the absolute best), whereas some are still in the elite of the poker world (Dwan and Robl of course).

A common conversation topic among poker players nowadays is “what if I started playing online poker in 2003?”. Well most of us did not; those days are gone. Not only have the games become infinitely tougher, but governments around the world are still making it difficult for online poker to thrive like it used to. Though legal online poker seems likely in the future, new taxes on winnings (they didn’t have tax laws in place back in online poker’s golden age) make profitability that much more difficult to attain. So things are not getting easier for us poker players. It seems we will not get a chance to print money like Robl or Dwan did any time soon.

But reading about how they made their millions is sure as hell entertaining!

After reading a few chapters I feel motivated and ready to play. I open up 12 tables and grind away. A couple of hours, a few successful bluffs, and hero calls I am a few hundred dollars richer. No hookers and blow for me, but tonight at the pub, first round is on me.

Ohad is a semi-pro poker player who enjoys both live and online poker. He’s been grinding low to mid-stakes since the late 2000s.