There is no shortage of books out there that tell you how to play poker better than you currently do. They inform, inspire and entertain on the virtue of perfecting your poker talents. There is a flurry of them on the market at present, from applying GTO to your game or stepping up the stakes as you improve your skills in your preferred format.

There are far fewer books around that let you know of the poker player’s greatest enemy, namely the mistakes you make. If you could only identify them, you could cut them out of your game. It stands to reason that it is easier to cut out mistakes than learn skills, so why isn’t there a poker book out there that targets those mistakes and bids to remove them from your current poker make-up.

Fortunately for you, there now is.

If you prefer to work from the perspective of eliminating negatives, then The 100 Biggest Mistakes That Poker Players Make by Alex Fitzgerald might well be the book for you. 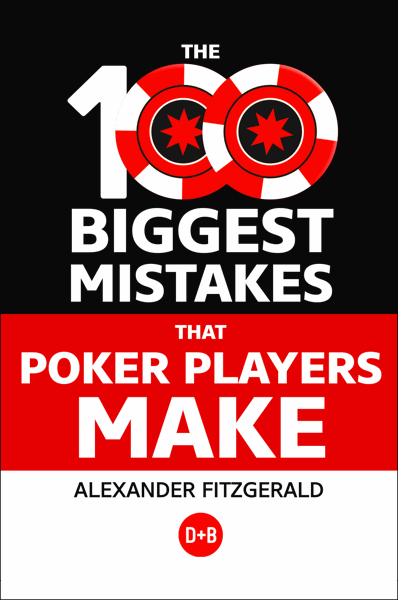 It’s often the footnote on a book such as this, but just as the tome itself references the author first, we wanted to make mention of it in reviewing the masterpiece, because it is undoubtedly that. Alex Fitzgerald not only provides a background of genuine success to call upon, both live and online, where he has starred in World Poker Tour and WCOOP events among others but as a career of being a poker coach par excellence.

Fitzgerald’s name is synonymous with poker coaching and in hundreds of training videos and articles and in his consultancy role, he has doubtless improved the game of poker overall; such has been his impact on those who play it. Ed. note: PLUS, Alex just became a Cardplayer Lifestyle contributor, too!

What’s in the Book?

As you might expect, 100 mistakes is a vast variety of blunders you can make at the felt. The book is — much like the last time this reporter made a final table — a catalogue of errors, and there are going to be plenty of occasions where you think “I’m so glad I don’t do that” while reading one chapter, then blush with guilt at your through-the-fingers enjoyment of the next knowing it is discussing a mistake you definitely do make.

Fitzgerald’s aim is not to humiliate us all for our errors, though. He only seeks to shine a light on them so that they might be identified, scrutinized and eventually, eradicated from our game. Much as a psychotherapist might try many methods in order to access that harrowing memory of missing out on the last sticker that would have completed your 1994/95 Premier League soccer album (or whatever your own trauma might be), Fitzgerald utilizes a number of clever ways in weeding out those mistakes that you’ve pushed under the carpet for too long.

D&B Poker published this hefty 398-page work (including the index), so The 100 Biggest Mistakes That Poker Players Make is not a pocket-sized handbook, but more the kind of poker bible that you should devour before referring back to, like the bible might be if Jesus played poker badly and liked to raise before the flop. As it happens, we reckon the master carpenter would have had the smarts to read this bible all the way through before sitting down and that would be our tip for new players who ask how they should play the game.

Honesty is the Book’s USP

Many of the ways that Fitzgerald highlights what we commonly identify as mistakes made by others is by helping you acknowledge that you’ll sometimes make the same missteps yourself. How many times have you begged the elite pro you watch on television to stop acting like a petulant child, only to find yourself doing similar but in a slightly less grandstanding way when you donk off a stack with four players remaining?

The book makes a sweeping statement in its opening that in the opinion of this reviewer should be writ large in the banner at the top of any poker website or above the door of any casino – never go pro unless you have to.

There are a number of these simplistic tips for how not to become a bad player, but they are expanded on really well and often turn out to be deeper than you may first have thought, leading into techniques for how to avoid making the same mistakes. This method of exploration and self-improvement take place almost without you knowing it and later in the book, there are more detailed breakdowns of specific plays that if you’d started with them, might have felt complicated.

For this reason, it bears to read the book with a pretty rigid discipline to the order in which the mistakes are listed. It’s not that you can’t check the mistakes individually and go back and review the ones that apply to you (there’s a final chapter handily devoted to doing just this), but it makes way more sense to read from start to finish. The book comes across like a well-honed classic rock album – every song is in the right place and if listened to in the order it was designed in, will have you singing throughout.

In the end, The 100 Biggest Mistakes That Poker Players Make is the kind of poker book that everyone should have on their bookshelf. Whether you’re a first-time player looking to join in with the most popular card game played for profit worldwide or a honed professional looking to eradicate a couple of mistakes that you’re struggling to identify,

The 100 Biggest Mistakes That Poker Players Make is highly likely to root them out for you. All you then need to do is make sure that you have the wherewithal to put the mistake behind you and – using the book as a strong reference tool – maintain your distance from the error and never make it again. One thing is for sure – buying this book is definitely not a mistake.