The Harrah’s and Rio’s casino staffs aim to improve the WSOP experience from year to year. This year, they’ve enlarged and set aside special sports bar areas from which soccer’s World Cup can be watched. Clearly, World Series of Poker organizers were aware that many nationalities would be represented at the 57 poker events throughout the summer, so they made a wise decision to dedicate a soccer zone where people can root on their national teams. 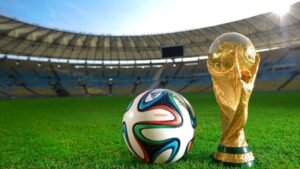 I just read on ESPN that U.S. soccer players have made a special request to have an authentic poker table available, where they can relax between matches and training sessions.

Now the big question is what would be more important to a soccer/poker fan: winning the World Cup or winning a World Series of Poker championship bracelet?

Beyond that, as poker and soccer fandom continue to grow around the world, perhaps there might be additional interesting future developments that see the two games (sports?) intertwine. For instance, I can envision a future in which a number of soccer legends (or even current players) might end up endorsing some of the larger online poker room brands. Professional soccer players – just like everyone else in the world – love poker too, so it stands to reason that such a partnership could eventually happen (if online poker rooms play their cards right, of course, and pony up the money it would take to sign a footballer as a brand ambassador).

Which soccer stars do you think would some day make great poker brand ambassadors? Let us know your thoughts in the comments section below – we’d love to hear from you!

I’m a major fan of the english premier league and this football competition actually encourages team efforts between the players outside of the games. Even Manchester United have poker challenges and many other teams are doing it too.

So yes, for sure poker and football are going to work together and as the greatest show on earth looms, the card playing hobbies are about to boom.