Ed. note: Ashley is working on a book of his poker travels. He has agreed to publish a few of his chapters here first. This is the very first in what will be a six-part series.

My ideal places for poker travel all have good poker games of course, but also other activities to engage me when the poker room is closed, or when I have grown weary of my favorite leisure activity. It’s also nice to have something for a non-poker playing travel companion to do.

Aruba fits the bill on all counts, with three poker rooms and a lot of other activities to keep you busy and happy when you’re not playing poker.

The Island of Aruba

Known for its beautiful Atlantic and Caribbean beaches, Aruba is an island nation located 15 miles off the coast of Venezuela. It is roughly 19 miles long, 6 miles wide, and covered with cactus, aloe vera plants, sand, and other desert features. It is generally flat, with some rolling hills and a few high points of no more than 200 meters. It is also home to many spectacular resorts and restaurants. 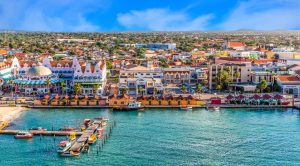 I visited the island in December 2022, spending four full days there, and playing poker on three successive nights in all three of the island’s poker rooms. During the day, I packed in as much touring as possible – renting a car and driving around to every corner of the island. I splashed around on six of the many beaches on the island, and hiked for six hours through the great national park (getting a terrible sunburn in the process). I climbed to the highest point, where I could see both the Atlantic and the Caribbean Sea, watched high tide crash into the Natural Bridge, and got pricked by the ubiquitous and varied cacti on the island. I saw dozens of lizards, including a four-foot long behemoth who wandered into the Hilton’s outdoor restaurant. I took a tour of the Aloe Museum, dined in a dozen restaurants, and spent hours walking the streets of the three major towns of Oranjestad, Noord, and St. Nicholas. In short, I had a blast on this happy island.

The poker rooms, all within an easy walk of each other, are inside three of the luxurious casino resorts right on the beach in Noord. They are the Orchid Casino, located in the Riu Hotel, The Xanadu (formerly the Excelsior), in the Holiday Inn, and the Hilton’s poker room. These casinos are small by Las Vegas, Atlantic City, or Macau standards – generally just one large room with slots, a few table games, and an area for poker. The poker rooms have 2 to 4 tables each, spreading $1/3 or $2/5 no limit hold’em. They offer Pot Limit Omaha on a limited basis. If PLO interests you, I would call ahead to see what night or nights it is likely to be going.

I played poker in all three rooms. They were remarkably similar in many respects. All opened at 7-8 PM and stayed open as long as a game was going or until 4AM, whichever came first. Rooms did not always follow their hours exactly, so I wouldn’t rely on any published or advertised listing of the hours of operation. Call them or stop in to get the most current schedule. For example, according to one on-line site, the Holiday Inn poker room was listed as “temporarily closed”. It was going strong when I was there!

The games all seemed to have a nice mix of roughly three tourists for each “regular”. But unlike playing in Las Vegas or other casino locales, the regulars were not necessarily more skilled, tighter, or tougher to beat than the tourists. I noticed a couple of local players who seemed to be major donor, while a couple of the tourists were highly skilled. Assess each player individually, not based on where they come from, and you’ll have a better idea of how beatable they are.

The dealers in all three rooms were extremely competent – better than the typical dealer in other parts of the world I’ve played in. I was impressed by their professionalism. Table talk was minimal, even as the dealers kept the game moving and the mood friendly, easy, and relaxed. The dealers all seemed to embody Aruba’s motto “One Happy Island”. I was told that they were all quite experienced. With Aruba being such a lovely place, it’s easy to see why they stay. The weather is fantastic, angry disputes practically non-existent, and just about all the players tipped generously.

The house provides free beverages and, in the case of the newly purchased Orchid Casino poker room, free food as well. The Orchid’s new owner, Paul, who played with us, ordered pizzas and brought over other snacks for us as we played.

The games are not free, of course. The house takes a hefty rake of 10% of the pot, up to $10. They also fund the generous bad beat, high hand, and other promotions with an additional $4 per pot promotional rake. One promotion that I liked was offered at the Orchid Casino. I have seen it before in a few of the California poker rooms. The house gives the first six players $250 for a $200 buy-in. In exchange, they have to stay and play for two hours. It’s a nice incentive for players to arrive early and get the game going. I, for example, got there at 6:45 PM, even though the game wasn’t set to begin until 8. But I’m a sucker for promotions.

The island has much else to recommend it. The resorts offer first-class food and accommodation – as well as beautiful beaches with pink-white sand and crystal-clear water. There are frequent, inexpensive, clean, and reliable buses. I rented a reasonably priced car from Sunset Car Rentals, and drove extensively on the well-maintained roads of the island. I especially enjoyed my visit to the small city of St. Nicholas – near the southern tip of the island. There are over 100 first-class murals that adorn the walls of the buildings in St. Nicholas. I also enjoyed walking around Oranjestad, where I visited the beautiful Beth Israel synagogue, and had an hour-long conversation with the island’s engaging and scholarly rabbi. He explained that there has been a Jewish community on Aruba since the 16th Century. 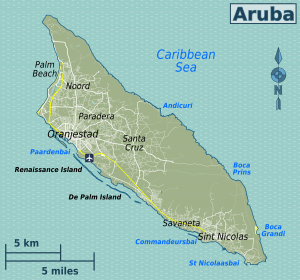 Having a car also gave me access to some of the less touristed but no less beautiful beaches located outside of Palm Beach, Noord, and Oranjestad. I watched the sun set over Baby Beach and Rogers Beach, on the southeastern tip of Aruba. I saw the sun rise over the Natural Bridge and beaches on the rougher Atlantic Ocean side of the island. I spent many hours hiking in the Arikok National Park and among the California Dunes (where I saw what looked like the track of the uncommon Aruban rattlesnake). Many tourists take advantage of great kite surfing, snorkeling, and diving in Aruba as well. Aruba is known for these activities – with many opportunities for them around the island.

Aruba is a truly international island. It is a free and independent nation in the Kingdom of the Netherlands. its currency is the Aruban florin. The dollar is accepted everywhere. In fact, the casinos require people to convert their local currency to dollars. Tourists generally have an easy time communicating on the island, as Aruba boasts an educational system that teaches four languages to its students: the local creole known as Papamiento, Spanish, Dutch, and English. With the chief industry being tourism, Aruba has fine restaurants of many different ethnicities, including Indonesian and Surinamian (both, like Aruba, former Dutch Colonies), French, Italian, Japanese, Chinese, Thai, Indian, American, Irish, English, and many others. Aruba has very little local agriculture. So, aside from some seafood, most of the foodstuffs on the island must be imported – which means higher prices than you might expect. I found the restaurant prices to be about on par with those in other resort areas in the United States – all showing the effects of post-Covid inflation. But there is a broad spectrum of prices. So, if you are traveling on a budget, look around. There are over 250 eateries to choose from!

Getting to Aruba is easy. There are direct flights from many major cities in the United States and Europe. Fares vary widely depending on when you are going. I saw coach fares from Boston, my home city, for as much as $1,350 roundtrip in late December. I traveled for $350 RT in early December, leaving on a Sunday and returning on a Wednesday. Unless you have an extremely narrow window of time for traveling to Aruba, I recommend using one of those travel aggregators like Kayak or Orbitz that allow you to easily compare fares over the course of a couple of months.

Similarly, the price of staying on Aruba varies widely. You can get room and board at an all-inclusive resort for $700 or more a night. At the other extreme, there are bed and breakfasts and inexpensive apartments for as little as $60 a night (without meals of course). I stayed in a very nice apartment, with a kitchen, a sitting room, and a king-sized bedroom, with a beautiful pool and restaurant, run by Best Western, for $75 a night. It was inexpensive because it was a mile from the beach. But my $30 a day rental car bridged that gap very nicely.

(One other minor matter of accommodation to consider. With the price of fresh water extremely dear on this desert island, all but the fancy resorts seem to have a lack of truly hot water. They rely instead on solar-heated water that is, most of the time, little warmer than tepid. I was dreading the idea of a “cold” shower in the morning. But I found, curiously, that after only one shower, I didn’t mind the tepid water one bit. I will not avoid the place because of it.)

Aruba is a great place to relax, enjoy the copious sun and warm temperatures, dine on some fine food, do some beautiful desert hiking and all sorts of water sports and activities. There’s also an indigenous culture well worth exploring and engaging with. I wouldn’t go here just for the poker, as the rake would probably keep it from being consistently profitable. But unlike many other island resort locations, it was nice to have a choice of poker games to head to at night. I definitely want to return – either with a couple of poker-playing buddies, by myself, or with my wife (although I’d suggest she bring a couple of good books to keep her engaged on my nights playing poker).