Here at Cardplayer Lifestyle we sometimes bring you stories that are somewhat off the beaten path, as far as poker is concerned. For example, sometimes we’ll talk about online casinos that offer interesting variants of poker games along with their regular suite of Casino Games offerings. Other times, we’ll do deeper dives into the history of various poker pros, asking what they did before they got into poker and examining any other interesting jobs they’ve had before beginning to make a living at the felt.

Thus, this particular post doesn’t have to do with poker per se, but more the lifestyle of a card player, specifically the need to eat healthy.

Who knew there could be any connection between nutrition and poker!

The idea is thought provoking in it of itself, for it’s directed specifically at “poker-playing guys”, arguably one of the most “difficult-to-speak-to” audiences possible. Hundreds of thousands of home games take place across the world on any given night. Though I have no statistical evidence to support it, my guess is that these poker nights overwhelmingly feature “typical guy food” such as pizza, beer, chips, platters of cold cuts, fried chicken, soft drinks, etc. 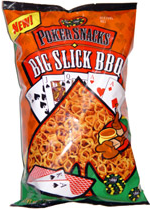 Think about it – if you’re a guy and “dare” to show up to poker night with a plate of veggies and dips instead of a supersize bag of chips and a bottle of coke, how would your buddies look at you?

Many professional poker players have spoken out publically (in their blogs and Twitter feeds) about the importance of a healthy diet and exercise regimen, most notably Daniel Negreanu, a “devout” vegan.

The goal of this particular poker blog post isn’t to try and change male culture; I’m also tempted each time the guys in my home game say “let’s order a pizza” (often I even partake in a slice or two). But I have to commend those who bravely step up and try to challenge that tough audience of poker players by making them more aware of what they’re doing to their bodies.

There’s just one particular poker tip I CAN give you from personal experience: cut out the soda from your own poker game. The artificial sugar highs you experience inevitably end up in “lows”; the longer you play, the more it will affect you and take you off your A-game. For years now I’ve only been drinking water on poker nights, with perhaps one small glass of soda towards the end to give myself one final boost before I’m ready to call it a night.

With that, I’ll leave you guys…. I’m off to play in my home poker game… and I’ve already called ahead to the host to make sure they’ve got healthy snacks. 🙂