The Unabomber? Wild? Crazy? Nuts? Insane? Call him what you will, but 1 thing is undeniable – Phil Laak is quite the character. Known more for his table talk, antics, prop bets, and friendship with Antonio Esfandiari, than his poker play, Laak had been atop an infamous list of “professional poker players without a World Series of Poker bracelet” – until now. 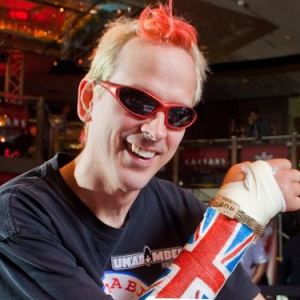 Emerging from a capacity field at Event #1 of this year’s World Series of Poker Europe in London, Laak claimed victory in the £2,650 six-handed no-limit Hold’em tournament.

In addition to the top-notch adversaries Laak had to overcome at the poker table, Laak also had to overcome the adversity of a recent ATV accident, which has his right arm temporarily immobilized in a cast and sling.

Laak had cashed in 8 previous WSOP events and had made 3 final tables, memorably finishing runner up to Johnny Chan when the latter won his then-record 10th bracelet in 2005. Finally winning a World Series championship bracelet, Laak also earned over $267,000 for his first place finish.

It is always good to see one of the known pros win an event, and Phil is no exception. I think the best line I heard about this W was that at least now he doesn’t have to listen to Esfandiari needle him on Tilly having a bracelet but him not! Laak is definitely running well recently!