It’s not often that one of poker’s best players chooses to put out strategy content, but that’s precisely what Daniel Negreanu did earlier this month, unveiling his new course being released under the “MasterClass” brand. For those who aren’t familiar, MasterClass is an online academy offering courses from experts on things ranging from screenwriting to, as of this month, poker. Other featured instructors include luminaries such as Gordon Ramsey, Malcolm Gladwell, Steve Martin, Ron Howard, Steph Curry, Aaron Sorkin, Martin Scorsese, Hans Zimmer, Judy Blume, Spike Lee, and many others.

Although Negreanu has stayed away from the staple sites of the poker coaching boom, this is actually not his first foray into strategy content. Stalwarts of the poker scene will remember his participation in the “Poker VT” experiment many years ago. Given the proven success of the MasterClass brand, this latest foray into coaching by Negreanu promises to be much more long-lived and impactful.

Which begs the question, is it a good thing? Reception from the poker community has mostly been positive. But there are a few naysayers, the most notable among them being “Big Papa” Doyle Brunson, the (God)father of poker strategy himself. In a recent tweet, Doyle criticized KidPoker, saying:

Daniel…you are the best tournament player in the world. Why are you educating people? Don’t make the same mistake I did with S/S. I justify my teaching that it created lots of new players that we sorely need. Today there are plenty of players…just saying. https://t.co/nxx840bFiA

S/S of course is a reference to Doyle’s legendary book “Super System,” the first ever piece of poker strategy content produced for a mass audience. That tome is widely credited with closing the skill gap between amateur and professional players, something that has shifted into overdrive in the modern era. In an age when edges are thinner than ever, it’s easy to see why Doyle would take the position he does.

However, I respectfully disagree. I think Negreanu’s involvement in MasterClass is a good thing for poker, and here are five reasons why:

1. It Connects Poker to the Mainstream

Poker has successfully shed the image of a game played exclusively by degenerates or mobsters in dark, smoke filled rooms. But post-boom, attracting new people to play the game is both more problematic and more important. Attaching poker to a respected online learning brand will expose the game to curious people who may not have given it serious thought in the past. Nothing bad can come of that.

That mainstream publications like @WIRED turned to a professional poker player for ANYTHING is awesome! Yay poker! 🙂 https://t.co/egsySq7Rgs

2. It Offers a Lower Gateway to Entry That Poker Had Lacked

Poker can be an intimidating world to the uninitiated. There are a lot of resources out there, but they are either total fluff (e.g., news/culture content), very intimidating (e.g., training courses), or disorienting because they offer no structure at all (e.g., Twitch content). Negreanu’s MasterClass, by contrast, bridges that gap by offering serious strategy with a guided, entertainment twist. This is a gateway that the game of poker sorely needed to attract new interest. 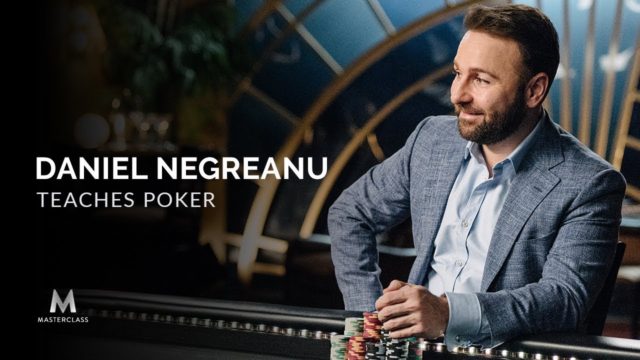 Joey Ingram put together a great reaction/parody video on YouTube about Negreanu’s course and it’s must-see content for hardcore poker fans. The personalities that fueled the Poker Boom are always juxtaposed against the lack of compelling characters in the newer generation. Bucking that trend, Joey is doing a lot of heavy lifting for the community right now creating poker content that is stylistically and topically relevant in the 18-25 demographic. Giving him material for that mission is a positive, and points to Papi for his creativity and being respectful.

In case you haven’t seen Joey’s video, you can check it out below.

4. It Highlights Poker As Skill Game

Recent mainstream media coverage about poker has largely focused on the topic of bots, solvers, or bots using solvers. This diminishes the image of poker as a skill game in the eyes of the general public. Negreanu’s new MasterClass reinforces the perception that poker can be learned. Placing it on the shelf alongside other skills is enormous free publicity for the game.

5. It’s An Important Reminder That KidPoker’s Still Got It!

Lost in this discussion is the value Negreanu’s course brings to current poker players. Over the years, Negreanu has enjoyed tremendous fame for being a poker ambassador. Let’s not forget that he is also one of the very elite few players who has managed to remain competitive over the last 15 years. I would be shocked if he gave away his high-stakes secrets, but the opportunity to even get some mid-level strategy from one of poker’s all-time great players is a pretty big deal.

Doyle is not wrong that making the secrets of winning players available to the masses can have an impact on the amount of money to be won at the table. The problem is that the ship sailed a very, very long time ago. Winning NLHE strategy is out there for people who want to find it.

Will Negreanu’s MasterClass offer a unique twist and some valuable insight? I assume so. But the perceived negative impact of that information being made public will be far outweighed by the overall potential for increased interest by players new to the game.

I signed up for @masterclass for some cooking and then ended up watching @RealKidPoker . Im gonna head to vegas for wsop next year to play poker. Thanks daniel!

Anecdotally, I have a friend I’ve been trying to get into poker. She doesn’t know enough about poker to find Twitch streams interesting, and is way too intimidated to join an existing training site. But she did bring this course up to me, unsolicited.

If that’s any indication of the advertising value, I find it hard to argue that Negreanu’s foray into the mainstream learning academy model can be anything but a great thing for all fans of the game.

*This article is brought to you with the support of Voitolla, where you can find a great casino reviews.