With the possible exception of his 1st WSOP bracelet, the famous 1989 Main Event victory of Johnny Chan, a bracelet win today at the $50,000 Player’s Championship surely would’ve counted for Phil Hellmuth‘s sweetest win ever. Made of white and yellow gold, diamonds, rubies, and sapphires, even the bracelet itself clearly stands out as unique. Unfortunately, Brian Rast had other plans for the Poker Brat.

Indeed, 2011 will still likely be remembered as “the year of Hellmuth”, as his runner-up finishes at 2 other final tables and this 3rd second-place finish all but make him a shoo-in for World Series of Poker Player of the Year. Though he didn’t win a bracelet, Hellmuth’s strong performances and deep runs specifically in non-Hold’em poker disciplines like 2–7 Lowball and  7 Card Stud Hi-Low nonetheless have clearly succeeded in getting the “he’s only good at Texas Hold’em” monkey off his back. Indeed, it could be said that Hellmuth has absolutely and finally earned the respect of his professional poker peers.

Hellmuth, an 11-time Hold’em bracelet winner, was clearly the biggest beneficiary of the event’s TV-friendly rule that mandates the final table only feature No-Limit Texas Hold’em. In a final table that featured a lineup of some of the game’s best players today, Hellmuth still stood out among the rest. Surprisingly, the all-time WSOP bracelet leader has never had a 7-figure payday until now, with his largest cash to date being his Main Event win 22 years ago for just over $750,000.

Since it was first introduced in 2006, the $50,000 buy-in Poker Player’s Championship has been rivaled in prestige only by the World Series of Poker Main Event. The high buy-in and mixed game format all but guarantees that only the best players in the world will succeed in the event. This year, a record 128 players entered, creating a prize pool of over $6.1 million. 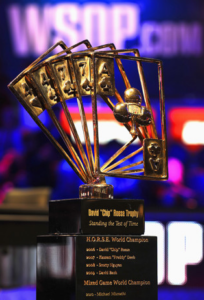 Hellmuth added a cool $1 million+ to the half a million dollars he’d already won this summer. But it will be Brian Rast’s name that will be etched onto the David “Chip” Reese Memorial trophy, an honor reserved solely for winners of the Poker Player’s Championship (Chip Reese, Freddy Deeb, Scotty Nguyen, David Bach, and Michael “the Grinder” Mizrachi).

This poker blogger’s been rooting for Hellmuth to score big all summer long. Three “silver medals” isn’t the same as even 1 gold, but nonetheless, I can’t wait for ESPN’s coverage so I can experience the thrills all over again!