Over the last few months, countless thousands of words have been written and dedicated to the current legal status of online poker in the United States. We haven’t said too much about these topics here at the Cardplayer Lifestyle poker blog, as, simply put, there’s been a lot of talk but nothing has actually happened. Well, that was all about to radically change a couple days ago until New Jersey Governor Chris Christie struck down a bill to legalize online poker with a last-minute veto.

The past half year has seen a number of different efforts launched to legalize online poker in the United States, none of which have succeeded as of yet. These include Nevada Senator Harry Reid’s push to regulate online poker at the federal level in last year’s lame duck session of Congress. On the state level, Florida, Iowa and California legislators have also been working towards passing laws to make online poker legal.

New Jersey, however, had gotten the closest to actually making it happen. The proposed legislation, authored by State Senator Raymond Lesniak, sailed through all the appropriate internal committees and was even ratified by the state legislature on January 10th of this year. The bill was to allow intrastate online poker play, which could be operated by any legal casino in Atlantic City. Notably, this would also have provided an opening for foreign citizens to play on a U.S.-based legal online poker website, as they are not bound by U.S. law. Tax revenues generated from the regulation of online poker were to be a boon to state coffers, as New Jersey continues to struggle under the weight of a heavy economic recession. 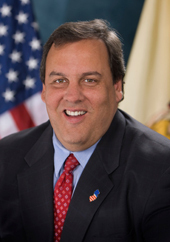 Governor Chris Christie let the bill sit on his desk for almost 2 months without doing anything. Pundits argued that the popularly supported bill placed Christie in a tough spot as, though he personally was in favor, his signing it could have long-term ramifications should he wish to climb higher up the American political ladder in the future. It was at this point that many of the bill’s supporters had high hopes for the bill’s passage, as New Jersey state law dictates that a bill becomes law automatically after 45 days even without the governor’s signature.

Literally, on the last possible day, Governor Christie vetoed the bill, saying that “certain provisions set forth in this legislation are not consistent with my administration’s policy objectives” and citing the legalese in the bill as not specific and direct enough to “overcome the clear and unambiguous language of the State Constitution.”

Strictly speaking, the issue is not yet dead, as Christie added that “if the legislature believes that expanding gambling outside of Atlantic City is in the best interests of the State of New Jersey, it should place the question on the ballot for the voters to decide” (in a referendum).

In sum, as the headline indicates, the status of online poker in the United States unfortunately remains unchanged. We’ll continue to monitor the situation regularly and update all of our readers as news emerges.