Billions and billions of words have been written about the U.S. online gaming industry since Black Friday. I’ve followed all the developments with great interest, of course waiting for the day when online poker would finally be licensed and regulated in the U.S. With two online poker sites now up and running in Nevada, it’s New Jersey’s turn to bask in a little limelight. Online gambling is scheduled to go live there as of November 26th. Unlike the laws passed in Nevada that allowed only for intrastate poker, however, New Jersey’s laws have paved the way for full-fledged online casino gambling as well.

I have no doubt that we will see some great online casinos start operating, on an intrastate level for starters. That, combined with New Jersey’s relatively large population, all but ensures a thriving online gambling industry in the state. As anyone who closely follows the industry could tell you, online poker is not the big moneymaker for the operators (please excuse the unintentional poker pun), but rather it’s online casino revenue that pays the bills. 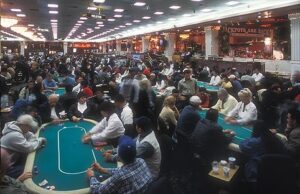 A sea of poker tables at Commerce Casino, in LA

To be sure, good live poker-only rooms (like the ones common in California) thrive because they’re run well, have great promotions, cater to players’ needs, and remain innovative. The same holds true for PokerStars in the online poker arena, where it continues its dominance. The fact is, however, that casinos, both live and online, have a much easier time staying afloat due to their built-in edge against everyone who steps up to the slots, blackjack tables, etc. to take their chances at winning money from the house.

Good Bets for Players vs. Operators 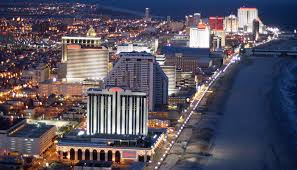 The Atlantic City casino strip may thrive yet again

Poker fans and poker players (i.e., the kinds of people who read this poker blog) know that as a player, the smart money is always within the game of poker. Sure, there’s a rake you’ve got to beat, but poker skills give you the potential to end up a winner. When gambling in the pit (be it virtual or online), your money has a much better chance of leaving your wallet and getting deposited into the casino’s coffers – they’ve always got the advantage against you.

From the legalization and regulation standpoint, however, New Jersey seems to have gotten it right. As much as lawmakers may be fans of poker or gambling, they’re fans of tax revenues. An online poker-only industry won’t be enough to give New Jersey the type of tax revenues it’s hoping for; whereas a fully-fledged online gambling industry has a much better shot of doing so. This moreover gives Atlantic City that much of an increased likelihood of rebounding back to its glory days – something New Jersey legislators have long been hoping for.