They say the poker gods reward bad play and punish good play. This is exactly the case of how I was able to hit my first ever royal flush.

The date was Wednesday 3 October 2018. It was a beautiful autumn evening, the temperature was just right. The sun starting to set, with colours of pink illuminating the sky; something rare for little South Wales but it’s nights like these why Wales is often referred to as ‘God’s Country’.

Even so, I was completely incognizant of my surroundings because there was only one thing on my mind: taking to the felt with a couple of my buds for our regular low-stakes tournament at one of our favourite boozers just for a bit of a social poker to break up the monotony that life can throw at you. Pub poker can offer plenty of fun for those times when slots bonuses aren’t working out for you. 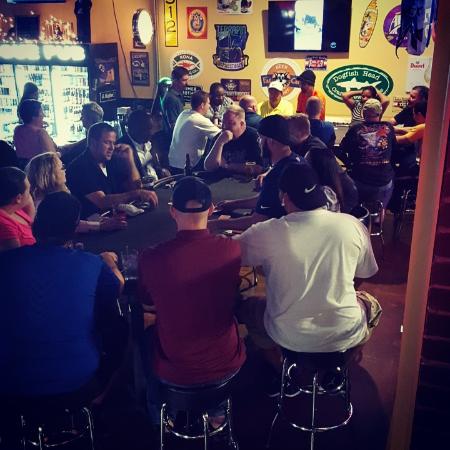 There’s nothing like pub poker with your mates. (Image used for illustrative purposes only)

Anyhow, after initial pleasantries, it was time to take our allocated seats. In an unusual but welcomed occurrence, my friends and I had been placed at the same table. I started the tournament with a nice run of cards and scooped a few early pots, I was feeling good about the way I was playing.

I opened with my usual 2.5BBx raise and one of my friends sat to the right of me calls my opening bet. He had also been catching some good cards and his stack was little larger than mine. A wave of regret overcame me and I cursed myself about possibly now having to play a big pot when I should have just folded pre-flop. No other players called though, and the two of us were heads-up to the flop.

As the dealer flipped over first three community cards, the flop displayed Qd, 10d, and 9c. My c-bet of 1,000 was met with a snap call. I wasn’t too fond of that as you could guess. The turn brought the Kd, giving me the nut flush draw as well as an inside royal flush draw. For this street I elected to check and decided I was going to fold to any serious aggression. My buddy then only bet 700, inflating the pot to 4,000. In a calling station state of mind, my thought was that I didn’t come out to play only to fold the nut flush draw and with the slimmest of possibilities of nailing my first royal. In my chips went and then the most stunning of cards turned over, the Jd. I had finally hit my first royal flush and my insides were doing all sorts of things. 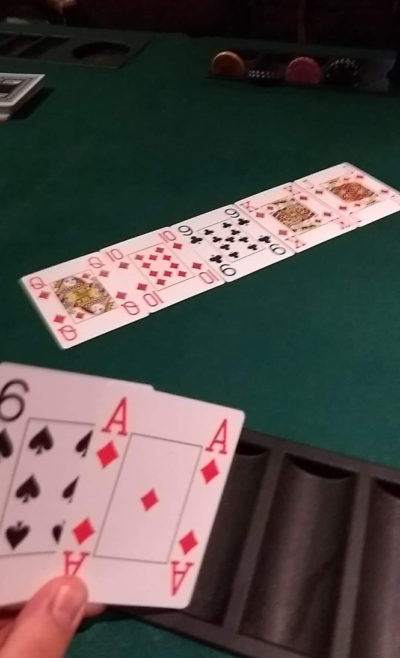 Completely ignoring the texture of the board, which featured a king-high straight, I shoved all my chips into the middle without thinking, something that I swore I wasn’t going to do at the beginning of the hand. It was the unluckiest of run-outs for my friend who had flopped a set of tens and had seen his made hand counterfeited by the board. A whisper of “that’s the last time I try and slow-play a set” came from his lips, and he mucked his cards to his and my dismay.

I turned my cards over with a little wry smile and offered a false apology, much to enjoyment of the rest of the table.

I went on to make the final table of this particular tournament, but busted just before the money bubble. Nonetheless, I was handed a meagre £20 as a reward for tabling the highest hand of the day. At this particular venue, they pay out even if the hand doesn’t go to showdown. So, despite not going on to cash, I at least came away even for the night with a hell of a story to tell.

READ MORE: That Moment When the High Hand Jackpot Gives You a Bad Beat