Women at poker tables are rare, like flopping a set or hitting a flush — it happens but don’t count on it. As the author of A Girl’s Guide to Poker, a Texas Hold ‘Em how-to book told in a proudly feminine voice, I was excited to find the new movie Poker Queens, available on Amazon. 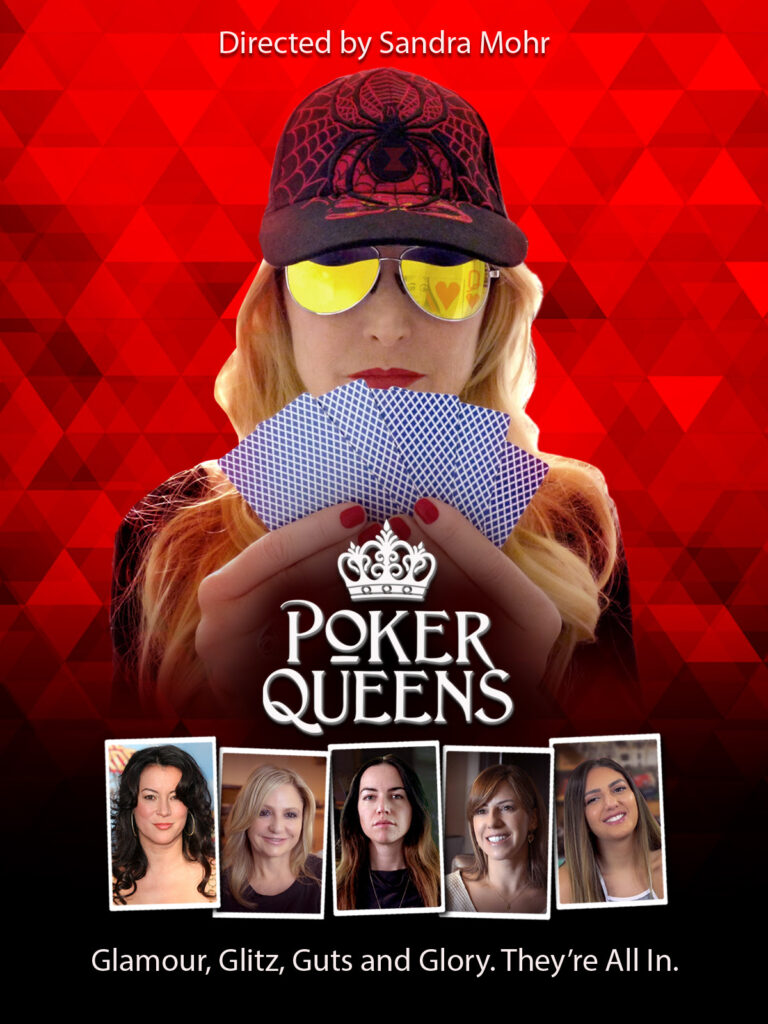 The film starts off setting the stage for women in poker. Outnumbered, but certainly not outmatched. One of the strongest takeaways is the actual women of poker themselves, who generally come across as cunning, capable, and charming. There are plenty of interviews spliced throughout the movie, including big names like Kristen Bicknell and Jennifer Tilly. Loni Harwood (who I’ve heard by the way from dealers is the best player they’ve ever seen) gets personal, as does Esther Taylor, who was one of the film’s standouts for me. Indeed, what this film gets right is the introduction of women in poker role models. They were presented as intelligent, likable, and individual; each had their own personality. It was refreshing for me to see women in poker as something other than eye candy or ‘one of the guys.’ The film is very humanizing.

Where it fell short for me was at first I didn’t know where it was going. “There are fewer women than men in poker” is a fine enough premise, but not much of an hour and twenty-minute movie. Perhaps I am not the intended audience since I am already steeped in the NLH sphere, but for me, there was too much time spent setting the stage.

Indeed, what this film gets right is the introduction of women in poker role models.

The most interesting part of the film is embedded much later already a half hour in: the filmmaker goes undercover.

As a matter of fact, I often found parts of her (Sandra Mohr’s) story more interesting than hearing from the celebrities, and wish she had focused more on her time as a master of disguise.

At first she dresses up as a (very convincing) hot blonde in sexy aviator shades to play poker. I loved her hidden camera catching a guy in the parking lot picking up on her, a perfect glimpse of the female experience.

Even more interesting, she then dresses up as a man to play poker, seeing how the other half lives. I mean plays.

The differences were striking (although I wish she would have elaborated on her experience more). One of my favorite scenes in Poker Queens was an actual hand she played as a woman, and a man calling her ridiculously light, saying himself it was about “ego.”

As a female poker player myself, I can attest that men absolutely play women differently. Fellow poker author Alex Fitzgerald, for example, says in one of his books that he sees outrageous statistical anomalies when looking at the women he coaches, massive amounts of data without any other possible explanation than gender. The movie touches on this, but could go even deeper. Another memorable line was when she said online poker players adjusted to her having a cartoon female avatar vs. a man’s cartoon avatar. I would love to see the comparison delved into.

There is also quite a bit about the filmmaker’s own struggles in producing the movie, which I found to be surprisingly interesting. Mohr tells the story — both hers and that of women in poker — with the addition of vibrant, eye-catching stock footage, and I was happy to go along for the ride.

I’d recommend this movie for those wanting to see positive faces of women in poker. It’s an easy, upbeat watch, and does portray a real sense of progress. The female poker role models are outstanding. Genuinely. The first twenty minutes was perhaps a bit too geared for beginners for my tastes, but like cross-dressing at a casino, there’s more than meets the eye.