If you’re fairly new to the whole idea of mixed game poker (like yours truly) but know a little bit about them, you probably think that the concept includes variations like Omaha 8, Seven Card Stud (regular and hi-lo), and an occasional variant that’s a bit out there, like Badugi.

What I learned yesterday, though, is that players who enjoy mixed games can be quite creative, and I mean that in the fullest sense of the word. I knew that the mixed games cash environment was pretty liberal in terms of games played, but I was surprised to see some games that I hadn’t even heard of before.

After the HORSE event on Day 1 of Mixed Game Festival III, yesterday was reserved exclusively for cash games, and the action started at around 2 PM. That’s what you’d call an early start in poker, but you could tell that everyone who arrived came ready to play!

It was just one table with a rotating cast of between six to eight players participating at any given time — Robbie Strazynski being one of them, from start to finish — and to say they were having a blast would be an understatement. That one table was making more noise than the rest of the tables in the cash game room combined!

With €5/10 fixed limits in place, it was a fairly affordable game that wasn’t going to break anybody’s bank (or make anyone rich, for that matter), so the focus was on having a good time. 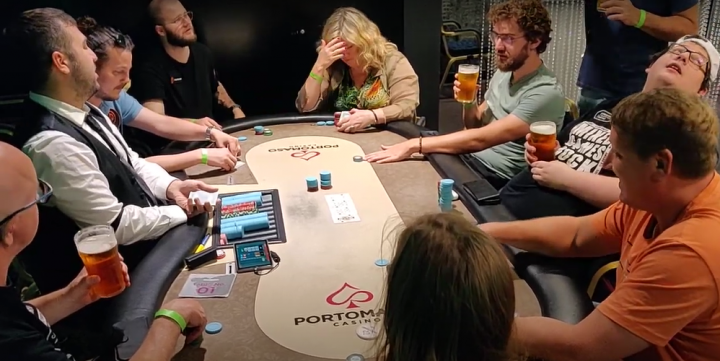 I was in and out of the cash game area, checking out what was happening and trying to keep up. After watching the game for half an hour or so, I was debating joining the action myself (especially after a kind invitation from the gentleman in seat three), but a few moments later, I decided it would probably be best to remain on the rail for this one.

As the button made a full round, it was time to pick the new game, and someone announced “Razzdugi.” I double-checked with Robbie to make sure I heard correctly, and he was kind enough to explain it was a split-pot game, where one half of the pot went to the best Razz hand and the other to the best Badugi hand, and the game was played like 7-Card Stud.

What fascinated me more than this completely new game (to me, at least) was that no one at the table even batted an eye. They were now playing Razzdugi, and no one missed the beat!

This included the dealers, who kept on dealing these different games as if it was nothing. The action was smoother than what you’ll find at most Hold’em tables, and that blew my mind. Sure enough, they needed a little assistance with announcing winning hands when games like “Razz High” were called, but overall, it was smooth sailing.

As cards and chips were flying around, players were having a great time. The table had more of a home game vibe to it, as everyone was very friendly to each other, and there was no tension. Not all of them were friends by the strictest definition of the word, but they were all brought together by their love for mixed games, and they weren’t going to let anything spoil the fun.

And they most certainly did not, as the game continued all the way until the early morning hours. I wasn’t there to see the conclusion, but Robbie let me know they wrapped it up at around 5 AM, for a total of over 14 consecutive hours of game play! During the entire session, the table only took one short dinner break. Some players came and went, but a few were there for the entire duration.

As is always the case with poker, some walked away with more than they bought in with, and others went home with their wallets a bit thinner. But there is no doubt in my mind that everyone walked away from that game a winner, as it was one of the most chilled and relaxed tables I had a chance to witness, in casinos and home games alike.

And today, they get to do it all over again, as we head into the third and the final day of Mixed Game Festival III at Malta’s Portomaso Casino.