Poker season is finally here and players from all over the world have come to Las Vegas to reunite with friends and return to their love of the game and the people who play it. The 2021 World Series of Poker is in full swing, but there are a lot of options to get your poker fix. The Cardplayer Lifestyle Mixed Game Festival at Westgate Las Vegas Resort is a great new way to experience some extra-curricular activities during a busy WSOP trip.

The Rio remains the most popular spot to find the best poker in town during the series, but veterans of tournament poker know that Las Vegas has much more to offer than what you can find at the WSOP. Players regularly step away to visit the local poker rooms in town for a break from the large crowds and long bathroom lines. Off-strip poker tournaments also have lower buy-ins that can help you stretch your bankroll or give you a chance to bounce back after a rough week in the Amazon room. 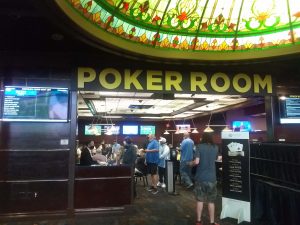 The poker festivals around Las Vegas that run concurrently with the WSOP are growing in popularity, but it’s still difficult for players to find mixed game tournaments at budget-friendly buy-ins. In response to the growing demand, Cardplayer Lifestyle partnered with Westgate to open their doors to mixed game enthusiasts who are looking for a chance to catch up on lost time and play some poker variants with like-minded poker fans.

Our Mixed Games Festival kicked off on Monday and will continue with cash games through Thursday, October 7, when the festival ends with a $200 H.O.R.S.E. tournament offering a PokerStars Player’s Championship Platinum Pass to the winner. The tournament kicks off at noon on Thursday, and a big turnout is expected.

Monday’s opening sessions were a resounding success, with new friends and old faces stopping by Westgate all day long to take part in the festival. Several players arrived early to make sure they could secure a spot in Thursday’s H.O.R.S.E. tournament, and the first table filled up quickly.

By 4 p.m. the game had grown to two tables, and a steady stream of enthusiastic poker fans was enjoying pizza while trying to snag the high card giveaways from PokerGO, Faded Spade Playing Cards, and BBO Poker Tables. Visitors came from places like Oklahoma, Illinois, and Canada, and they were excited to share their enthusiasm for getting back into a card room.

One visitor, a guest of the hotel, had stopped by the poker room looking for action. The regular Hold’Em tables weren’t running yet but the mixed game players were ready to go. The new player did not hesitate to jump in and give mixed games a try.

“I don’t play stud,” he said to the others at the table. But that is rarely a problem when you are in a group of mixed-game players. The players quickly explained the rules of seven card stud and the game rolled right along.

A relaxed atmosphere and friendly company are a great way to learn any new poker game, and a few of the more obscure variations usually require a rules refresher for even the most seasoned poker veteran. The game moves at a casual pace and without pressure, so it’s well-suited for someone interested in learning about casino poker without the bright lights and glaring opponents that can sometimes be found at larger tournaments.

Dylan Linde stopped by on Monday to share time with poker fans and sign copies of his book Mastering Mixed Games: Winning Strategies for Draw, Stud, and Flop Games. Linde’s enthusiasm for mixed games drew an early crowd and several visitors spent time with questions for the author and poker pro.

We’ve got @DylanLinde in the house signing his Mastering Mixed Games book by @DBPoker1.

$20 a copy, with all proceeds being donated to charity (the @WestgateResorts Foundation).

“I come from mostly playing no-limit tournaments with smart, competent players that had no idea how to play mixed games,” Linde shared with a fan while signing a copy of his book. “My approach to writing this book was to try and show how the games are all connected and to bring some concepts you are already familiar with into your learning about new games.”

The popular mixed game strategy book was available to visitors for $20, and all of the proceeds will benefit Westgate Resorts Foundation, including matching funds from PokerStars and Westgate. The opportunity to spend time with a poker great will come again on Tuesday when Eli Elezra will be at the Mixed Games Festival at 11 a.m. PT to visit and sign copies of his autobiography Pulling the Trigger for $10 with 100% of the proceeds to benefit charity.

Much More to Come

Monday was the first day of the festival and there will be two more days of cash games before the $200 H.O.R.S.E. tournament awards the PokerStars Platinum Pass on Thursday. The Platinum Pass is valued at over $30,000 and a large crowd is expected to take their shot at winning the coveted poker package. Players will start with 10,000 chips and cash game grinders will have the opportunity to double their stack by playing in the cash games throughout the festival. Bonuses start at an extra 2,000 chips for every five hours played and cap out at 10,000 extra chips for 25 hours of play.

Space is limited for Thursday’s H.O.R.S.E. tournament, and several players were in line at 10 a.m. Monday to secure their spot, so make sure you get over to the Westgate and register as soon as possible. The room can handle up to 144 entries. If necessary, the alternates will be seated during the first two hours until the end of late registration.