Let me tell you a poker story that’s so utterly ridiculous, you probably won’t believe me. You’re going to have to sit down for this one. When my buddy told me what he did, I couldn’t believe it either and my instant reaction was to call “bullshit”. Then he kept on talking, adding specific details of the story for a good few minutes. It honestly sounded like he was retelling some sort of poker dream he had had the previous night. Then he showed me pictures. I genuinely couldn’t believe it, but he was telling the truth. 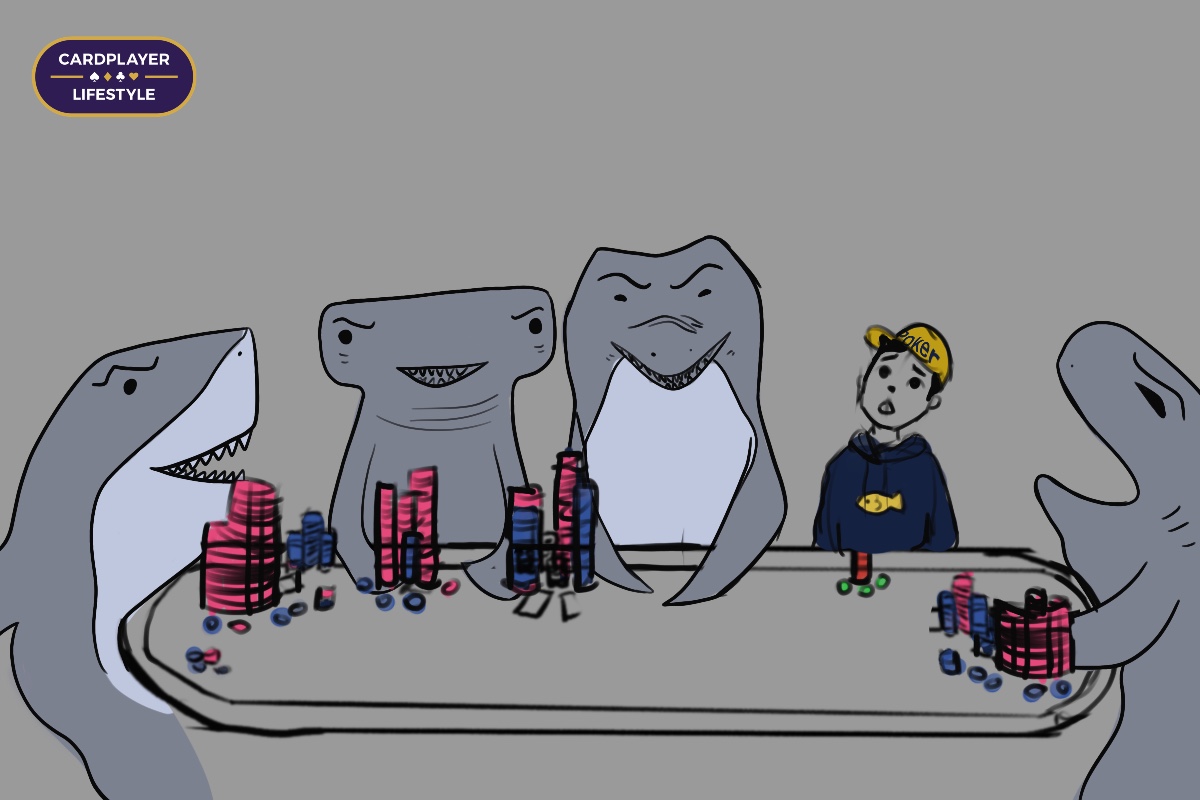 My buddy has been playing in low-stakes home games for about 20 years. I mean LOW stakes – $.25/$.50 kind of stuff – and he’s never really moved up. Sure, when he visits poker rooms he plays $1/2 or $1/3 No Limit Hold’em (after all, you can’t really play any lower). If he finds himself at a non-Hold’em table, he’ll almost always be in a seat at a $4/8 limit game. This is a fella who really gets wound up if he loses a couple hundred bucks in a session and who looks and sounds like he’s taken some sort of “happy pills” if he somehow manages to win that amount.

So you can imagine what my face looked like when he told me he’d just played in not one, but TWO sessions of an $80/$160 mixed game in Las Vegas. With a wry smile on his face, he said that it was 10 times the highest stakes he’s ever played for.

That’s not “taking a shot”, that’s borderline insanity! You don’t find recreational “home game heroes” and weekend warriors playing in an $80/$160 mix in Las Vegas. You find seasoned pros. Sharks out for blood. Raptors waiting for fresh livestock to be dropped into their cage.

Cautiously, I couldn’t help but ask “PLEASE don’t tell me you risked your own money in a game like that?” To which he responded, “nah, dude. You think I won a jackpot on an online casino site like Goldenslot or something? I got staked.”

PHEW! I was worried my buddy’s wife would’ve thrown him out of the house if she ever found out. Alright, well, at least his story seemed more believable now. But it was still an insane thing to try!

A Literal Who’s Who of the Poker World

He told me that the game took place at Resorts World, and then he went on to list the people seated at his table. It was as though I suddenly had a front row seat to a Phil Hellmuth name-drop session: Ari Engel, Andrew Yeh, Kevin Gerhart, Nathan Gamble, Alex Livingston… You know, just your random assortment of WSOP bracelet winners and WPT & EPT final tableists. A bunch of guys with a collective $15+ million in career tournament earnings, and who’ve each probably played at least that many hands of poker.

“The guy who staked me, he knows my dad, lives in Vegas and he plays much higher. I dunno, I guess he just felt like giving me a shot” my friend said. “Who am I to say ‘no, thank you’?”

My buddy continued his story: “So my staker me looks me in the eye and says ‘Don’t pay attention to the money; it’s just chips. Pretend you’re playing in your home game’ and he places four chips in my hand and tells me to go lock up a seat. Naturally, I think he put four yellow chips in my hand ($4,000), but I look down and I see this:” 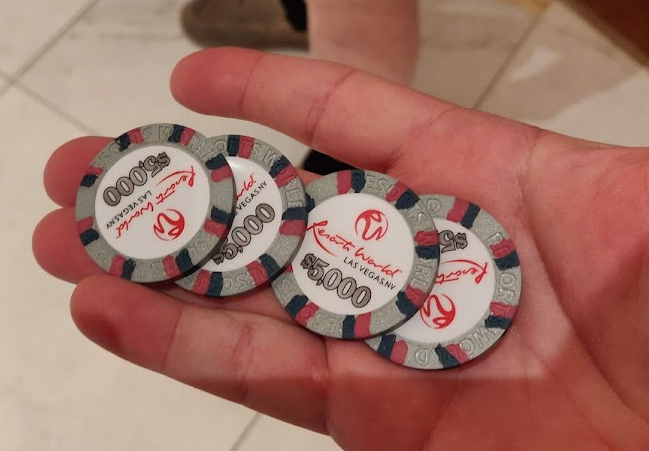 At that point I nearly lost it: “TWENTY THOUSAND DOLLARS?!??!” And my buddy says he told the guy who staked him the same thing – that’s WAY too much! – but he was rebuffed. The staker replied to him with a smile: “If you’re going to play in that game, you need to feel comfortable sitting there. Buy a rack of black chips – don’t worry, you won’t need it – just put it on the table so you know you have it, buy $20 chips with the rest of it, and just play your game.”

And “play his game” my buddy did. Well, sort of. He’s played in quite a few mixed games over the years, but just like any new home game, there’s always at least one or two new variants thrown into the mix that the regulars seem to know while you end up paying tuition to figure ’em out.

This was an umpteen-game mix and it naturally featured some games and quirks my buddy had never heard of, for instance this little ditty:

With all those things to remember, and used to his home game drawmaha rules of “max 3 draw,” naturally when my buddy found himself on the button he didn’t realize he was allowed to draw as many cards as he wanted.

Needless to say, he did NOT win that hand 😂.

I realized that clearly my friend couldn’t have torched the whole $20K if his staker put him into a second session. So I asked him what it felt like to play that first time, and he said “I played for seven(!) hours and it felt incredible. My staker was right… after about 15 minutes I really started to feel comfortable; it was ‘just chips’, like my regular home game. Sure, I watch those guys on PokerGO and read about them winning bracelets, but they all put their pants on the same way I do and they were all super friendly.”

Well, duh… who wouldn’t be friendly seeing a fish with $20K on the table… 😉

“So you WON?!” I asked him incredulously? “Unfortunately not,” he said “but I was up a few stacks at some point and it was a tremendous rush. As a matter of fact, when Ari got up to leave the table for the night, I walked out after him and asked how he thought I was playing. He said ‘Pretty good; you’re playing kind of passively, but it’s working out for you – you should try to be more aggressive.’ Imagine that, Robbie, your $.25/$.50 home game buddy getting told by Ari freaking Engel that he was impressed!”

My jaw dropped. “So, did you win in the second session? Was it the next day?”

“Nah, it was a few days later. I thought it was a one-off and didn’t realize I’d get a second shot, but who am I to say no if he’s gonna offer me another opportunity, right? I played for a little over four hours this time, and I definitely tried to be more aggressive but I couldn’t catch cards. I think I played pretty well in the stud games, and this time I was extra careful and nitty in the games I wasn’t as familiar with. But, Robbie, you know just how brutal draw games can be when you start with great cards but just can’t catch anything. That’ll decimate your stack in a hurry.”

I nodded understandingly. We’ve all been there before… but not with tens of thousands of dollars on the table.

“I did better, but I still lost,” he said. “After I racked up, I pulled Nathan Gamble over to ask how he thought I played. He smiled kindly but said ‘LOADS of mistakes, especially in stud.’ And he talked me through a couple hands and pointed out how I could improve. Then I saw Ali Nejad walk into the room, request four bundles of cash from his box, and just toss it all up into the air…and everyone at the table started cracking up, and…”

I couldn’t help but giggle… my buddy had clearly lost his mind… but wait a sec… ‘racked up?’… so again, he didn’t torch the whole thing!

I asked him straight up: “You’re telling me you played in an $80/$160 mix with all those guys for close to 12 hours and you still managed to walk away with chips? How much did you lose?”

“I can’t tell you everything, buddy… but I can see you still don’t believe me. I swear to you, I’m not pulling a fast one over on you. Look, I’ll show you.”

And lo and behold, he then let me scroll through half a dozen pictures on his phone. He really was telling the truth.

Having a Hard Time Believing This Poker Story?

If you’ve made it this far and you’ve only just now realized what day it is today, you’re probably expecting some sort of April Fool’s Day punchline right about now.

Well, folks, I assure you the story you just read is absolutely 100% true, beyond the shadow of a doubt. Like I said, I saw the pictures with my very own eyes!

Admittedly, I did change one tiny detail though. 😊

Those pictures were all taken by my father a little over three weeks ago, and that “buddy of mine”… well, it was me. 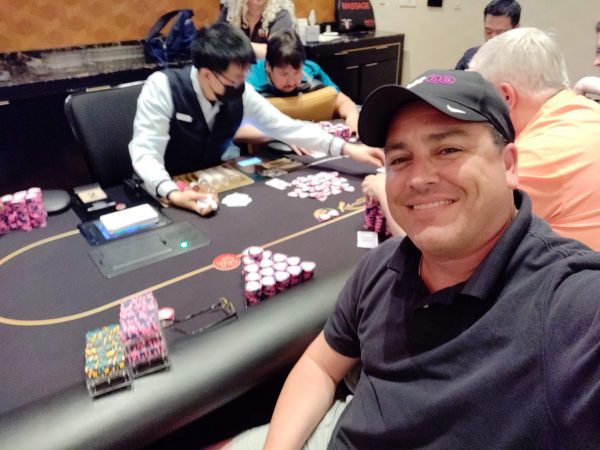