Live Poker is Easier Than Online Poker – Here’s Why

Trying to decide if you should focus on live or online poker? While both versions of the card game have their ups and downs, if you want a better shot at winning, we suggest going for live poker. Don’t worry! We’re not just saying that expecting you to take it for granted. We’ve prepared a list of reasons why it makes a lot more sense to enjoy live poker over the online variant if you’re after a good win. Importantly, everything we’re suggesting is as a general rule, so of course there are many exceptions.

Without further ado, let’s take a look at why live poker makes a lot more sense. 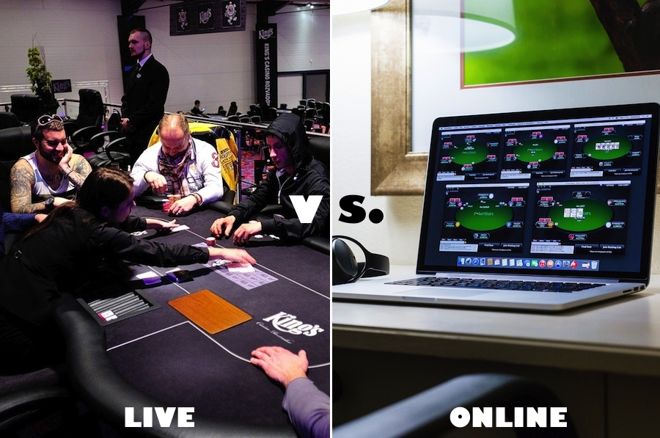 If this one doesn’t make a lot of sense, for now, we understand. All poker players value money, that’s why they are playing. While that’s true, it’s far more likely for online players to be more focused on the money involved since they’re younger on average. This can mean they might have a hard time getting together the $500 needed to sit in at a live game. Not to mention getting the (larger) bankroll needed for a shot at winning a live tournament. So, while you probably need around $4,000 for a full $1/$2 live No Limit, $500 is more than enough to get even 20 buy-ins at a 25nl online. This being said, the chances are these younger players will do everything in their power not to lose, with their proverbial backs against the wall, even if it’s just for bread crumbs.

If you’re playing at tables bereft of professionals – as it’s the case for most players in your position – you will likely gain an extra advantage simply by using online resources. Stuff like poker training sites, tools to play better, and strategy articles can give you an advantage compared to other live players who often tend to be more old-school. Of course, that’s not always the case. However, more often than not, you are going to have an advantage over live players that rely only on their intuition to play poker.

Playing Live Gives You a Chance to “Borrow” Some Moves

Live poker involves becoming part of a clique at some point. If you go to local tournaments or play with the same people over and over again, you’re going to be part of one sooner or later. You can use this circle of friends with the same interest for poker to bounce ideas off each other and go over the matches to study your mistakes. It’s also a good opportunity to “borrow” some moves or strategies from the most successful ones. Of course, you need to be very careful what you borrow from your fellow poker players as there’s a lot of bad advice floating in these cliques. Nonetheless, you can’t really have the same experience with online poker. If you open a discussion regarding a previous hand, most people are likely to jump on your throat and start an argument. Also, best to talk about hands played away from the table, after a session rather in the middle of one.

Even if you are playing at “beginner” online poker tables, the chances of facing an tough opposition are higher. When playing poker online, you can expect an average of 100 hands per hour compared to 30-40 at most in live poker. Considering that a rookie at an online poker table plays for approximately two hours daily for a week, that’s already 1,400 hands “worth of experience” they’ve accrued. That’s a lot more than when compared to what would happen at a live table. So, there’s a far greater chance you’ll play against better-prepared players online. And that’s not even taking into consideration the possibility of playing multiple tables at once. Also, there’s the use of tracking software that could give an even greater advantage to your online opponents, which is simply not possible in a live setting.

Naturally, this doesn’t mean you won’t find exceptional players at live tables that are meant for beginners, but that happens a lot less frequently than online.

Similar to what we’ve talked about above, some of the best players are mesmerized by the online poker lifestyle. Not having to actually leave your home and being able to play multiple tables at a time to increase profit is reason enough for the best players to choose this type of poker. So, if you want to have a better chance of winning a game or even a tournament, live events could prove to be easier to tackle. Again, it doesn’t mean that all the good players stick to online poker only. However, you should almost surely have better odds playing at a live table, especially if it’s a tournament that doesn’t have a big prize pool.