Major Legal Victory for Online Poker in the U.S.

Online poker fans in the United States may one day owe a huge debt of gratitude to 91-year old Jack Weinstein, a former professor of Law at Columbia University who has been a Federal Judge in the Eastern District of New York since 1967. On Tuesday, Weinstein came out with a 120-page ruling stating, among other things, that poker is more a game of skill than chance. 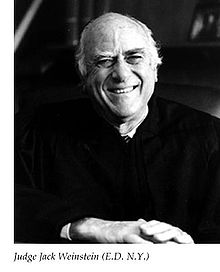 The Case in Question

Weinstein ruled in a case where Lawrence DiCristina, a 33-year-old from New Jersey, had previously been convicted by a jury of conspiracy to defraud the United States and illegal gambling by running raked poker games in the back of a warehouse he owned. DiCristina appealed his conviction on the grounds that the definition of “gambling” in the 1970 Illegal Gambling Business Act didn’t apply to poker, which he believed to be a skill game.

The judge concurred with DiCristina’s argument in his verdict, saying that:

“…chance [as compared to skill] has traditionally been thought to be a defining element of gambling and is included in dictionary, common law and other federal statutory definitions of it … (but) because the poker played on the defendant’s premises is not predominately a game of chance, it is not gambling.”

Weinstein based his decision to a large degree on the findings of expert defense witness Dr. Randal D. Heeb, a statistician and economist. Heeb’s analysis of online poker indicated that in the long run, those players with the most skill would be favored to win in the long run.

The ruling exonerated DiCristina, who had been facing up to 10 years in prison.

Reactions from the Poker World Perhaps it’s no coincidence that a 36-page study of online poker was just released in Holland. In it, researchers who analyzed over 415 million hands came to the overwhelming statistical conclusion that skill is an important factor in online poker across low, medium, and high stakes. The huge database of hands was purchased from HHdealer, which mines data from poker sites with MTT options.

We’re certain that the more studies and decisions like these that come out will end up having widespread impact when it comes to resolving the issues surrounding online poker’s legality in the United States as well as in other jurisdictions that have yet to regulate the game.