About a year and a half ago, I wrote an op-ed calling Poker Night in America “Poker’s Next Big Thing“. The show has certainly not disappointed. Three seasons of Poker Night In America, totaling a terrific 100 episodes, have been aired on the CBS Sports Network. The crew has filmed dozens upon dozens of great poker lineups at locations as varied as Maryland Live!, Reno’s Peppermill Casino, Pittsburgh’s Rivers Casino, Atlantic City’s Golden Nugget, and of course Turning Stone Casino in New York. Calling all the action until now has been Chris Hanson, and he’s been doing a great job. As of Season 4, however, there will be a pair of aces doing the commentary, with Hanson being joined by the supremely talented and incredibly funny Joe Stapleton. 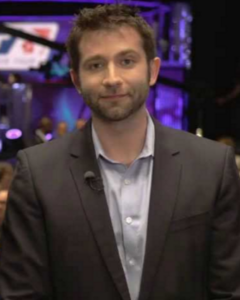 Stapleton has made his mark on poker over the years with a tremendous body… of work, that is, on legendary poker shows including the European Poker Tour and The Big Game. He’s also been a longtime fan favorite poker podcaster on shows like Huff and Stapes, EPT Not Live, and others.

“We can’t wait to get Joe up and running,” said Rush Street Productions President Todd Anderson. “I’ve been a fan of his for many years and think he will be a very entertaining addition to the program.”

While the official announcement was made via Rush Street Productions press release today, some Stapleton fans might have guessed that this was coming by checking out his Twitter feed:

I can’t believe I’m saying this but I’m going to Fargo today and I’m excited about it.

(Ed. note: Fargo is Anderson’s hometown. OK, in all fairness, if you were able to guess this development from that Tweet, you’re probably following Stapes a bit TOO closely.)

“We are constantly looking at ways to evolve as a television show and ratchet up the production,” continued Anderson.  “Since day one we’ve been trying to produce a unique poker TV experience and adding Joe is another step in that direction.”

What Does Stapes Bring to Poker Night in America?

Look for Stapleton to add flashes of his trademark humor to the great, entertaining poker action on display at the tables. I, for one, can’t wait to hear what he has to say about some of the greatest poker characters in the biz squaring off against one another. Expect the laughs to hit even harder if “poker celebs” like Jennifer Tilly and James Woods take to the Poker Night in America table again. 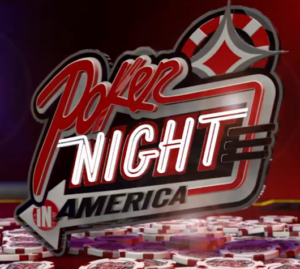 After plying his trade abroad in the UK for a few years, this marks Stapleton’s return to U.S. shores. Needless to say, Stapes is excited to be back on home soil.

“I’m thrilled to be back doing poker on TV in the States, and especially on a show like Poker Night in America,” said Stapleton.  “The team there really seems to understand how important it is to focus on the fun, social aspects of the game. Everyone always seemed to be having a blast the first three seasons, and I’m pretty excited to get in on that.”

On a personal note, after being a fan of his work for many years, it was a pleasure to meet Joe Stapleton in person at the PokerStars Caribbean Adventure in January. Having had the chance to chat with him for a couple minutes, it immediately became clear to me that that nice guy facade you see on TV and hear on all those podcasts… is exactly the same nice guy you see and meet in the flesh. I have no doubt that he’ll make Poker Night in America even more enjoyable to watch than it already is.

So thrilled to meet @Stapes & @J_Hartigan for the first time at the #PCA2016. Two awesome, supremely talented guys! pic.twitter.com/RdgEEyMPOC

Season 4 episodes begin taping during the first week of April. Be sure to visit Pokernight.com for more information.

Why don’t you just say it Robbie? This is the best thing to happen to televised poker in the US, and the worst thing for humor since Emo Phillips!
(DISCLAIMER: I have a genetic hyperbole condition)