Can Poker Get Any More Jewish?

Ed. note: We first got wind of this story from the Israeli newspaper Makor Rishon, in an article written by Zvika Klein.

Some of poker’s most successful players are Jewish, but who among them is the best? A couple of enterprising tribesmen from Las Vegas have made it their goal to try and find out by organizing the first ever “Jewish poker tournament”. Depending on how successful the venture is, we may have to modify our list of the Top 10 Jews in Poker.

The event was conjured up by 31-year-old Ilya Sheyn and 36-year-old Andrew Rothbart, a couple of Jewish poker playing friends from Las Vegas. They hope to attract as many as 300 Jewish poker players from around the world to join in the fun. Thus far, their idea has piqued the interest of players from across the U.S. as well as in South Africa, the U.K., and of course Israel. Their just-launched website will be forthcoming with additional details as they’re finalized.

When? Where? Is It Legit?

Acutely aware of the lack of entertainment options on December 24–25, Sheyn and Rothbart chose those specific days to give their fellow tribesmen something fun to do while everyone else is out celebrating the Christmas holiday.

Las Vegas is of course the natural setting for a large-scale poker tournament, but a specific venue has yet to be named. This poker blogger’s guess is that the event will take place at the Venetian, which just so happens to be owned by one of the world’s wealthiest Jews, Sheldon Adelson.

As to whether or not something smells a bit (gefilte) fishy, based on Jewish Poker’s Twitter following, at least a few known Jewish poker players and personalities seem ready to go along with the idea, including Adam Levy, David Baker, Jared Jaffee, Randy Dorfman, Jack Effel, and Jan Fisher.

The buy-in for the Texas Hold’em tournament has been set at $1,000 with an $80 entry fee. If the tournament does indeed attract a full house, first place prize money will be $70,000. The winner will also take home a trophy (troyphy?).

Plans call for the tournament to have a distinctly Jewish flavor. The venue will be decked out in a fully Jewish theme, Israeli and Jewish music will be pumping from the speakers. The organizers plan to line up some Jewish comedians to perform and liven up the crowd, and are also hoping some Jewish celebrities will show up to support the cause. 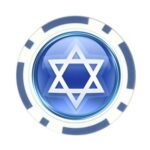 And what would any good Jewish event be without a smorgasbord?! Our guess is the menu will include a wide range of “traditional” Jewish dishes, like chicken soup with matzo balls, kosher sushi, deli sandwiches, and of course Chinese food. 🙂

The only thing that seems to be missing from this upcoming ingathering of exiles is a “tzedaka” (charity) angle. We hope the event organizers consider adding in a charity poker component as well. Surely that’s something that would be agreed upon by anyone who participates.

*By the way, in case it’s not exceptionally clear, this poker blogger is very proud to be Jewish too 🙂