Even many of my closest friends don’t know this about me but I’m a pretty huge WWE fan. I have been for close to 24 years. I got hooked back in 1989 when I first watched Randy “Macho Man” Savage cut a Wrestlemania V promo. That was more or less around the same time I learned how to play poker; you know, 5-card draw, hand rankings, etc. There’s no way I could ever have imagined that at not yet 8 years old I had “stumbled” upon what would become two of my life’s greatest loves. That all got me thinking recently about how insanely cool it would be to play and interact with some wrestlers (yeah, I know WWE “Superstars”) around a poker table. 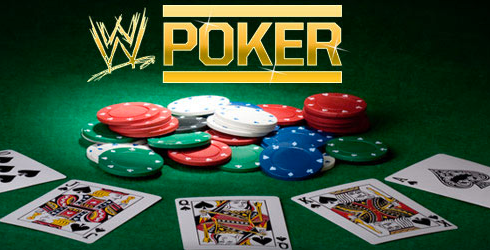 Like 2009 WSOP Main Event Champ Joe Cada (who showed up at Raw), I’m obviously not the only young, red-blooded American male who loves both, and it stands to reason that professional wrestling and poker probably have quite a large overlapping fan base, namely the 18-49 male demographic. That said, as PokerNews’ Donnie Peters so brilliantly wrote in a recent op-ed, poker clearly needs more characters to reinvigorate the game and make it more exciting. I can think of no people better suited to be “characters” than the larger-than-life personalities of the WWE.

With that in mind I present to you my list of the top 10 WWE Superstars I’d love to see sitting across from me at the live felt. There’s no particular order and my list includes Superstars from all eras of professional wrestling. Even if I was just acting as the dealer (special guest referee?), with all these characters sitting around me and playing, it would undoubtedly qualify as an all-time personal poker highlight. For the record, in my next post, I’ll list the Top 10 WWE Superstars I’d Hate to Play Poker With.

In over 2 decades of competition, the Undertaker has essentially never broken character (kayfabe) either in or out of the squared circle. Can you imagine trying to get a read through his poker face? Owner of professional wrestling’s most legendary streak (20-0 at Wrestlemania), who wouldn’t jump at the opportunity to try and put a chink in the Phenom’s armor (a dent in his stack)? Specifically, if he were ever to show down a hand with two pairs, aces and eights, it would bring a completely new layer of meaning to the poker term “dead man’s hand“.

Brash, cocky, supremely confident… I’d specifically like to play poker against the Miz in order to come from behind in a hand and suck out on him with inferior hole cards. Can you imagine his reaction if I’d spike a 2-outer? Really? Really? REALLY?! I’d be like “Ya Miz… really!” A little-known fact is that the Miz actually loves to play poker and even participated in a charity poker event when he was Tag Team Champ just over 5 years ago. Plus, he sure knows how to sing Lady Gaga‘s “Poker Face”. 🙂

Though sadly deceased, I’m 100% positive that playing poker with the Macho Man would be worth the price of anteing up. A true “maniac”, I wouldn’t know the first thing to expect as to his playing style, but it’s an absolute guarantee that if he’d pull off a nice bluff he’d let the whole poker table know about it … ooooh yeah!

Cool, calm, and collected, surely the Hitman’s in-ring excellence of execution would extend to the poker table as well. Armed with those types of skills and the best set of shades on earth, Bret would be a tough player to beat, to say the least. Of course, if his pocket aces were ever cracked, he’d probably throw a fit and claim he was “screwed” by the dealer.

Think 2010 WSOP Main Event final tableist Filippo Candio was quite the character? His Italian countryman, Santino, is all that and a barrel of laughs to boot. Every group of guys and gals at a poker table needs some entertainment and comic relief, which Marella provides in spades. Though the rules traditionally state “English only at the table”, I’m sure that in Santino’s case everyone else at the table would be happy to make an exception.

Whether “luck be a lady” or not, Trish Stratus is one WWE Diva who’d always be welcome at my poker table. Aside from having arguably the greatest career of any female wrestler in history, she notably appeared in a poker-themed vignette during her tenure in WWE. Seriously, it’s impossible to watch that video and claim that having her at the felt wouldn’t be “stratusfaction guaranteed”.

Just when you think you’d be able to spot a tell and know the type of opponent you’re up against, Foley could switch gears among any of his 3 legendary in-ring personas, Cactus Jack, Mankind, and Dude Love. One minute a carefree spender spewing chips, the next moment a tight nit player reluctant to part with a single chip, Foley would sure make for a fascinating poker opponent.

Also known to wrestling fans as the younger brother of Macho Man Randy Savage, Lanny Poffo‘s career wasn’t nearly as successful, but his Genius gimmick was the stuff of legend. It would be pretty fun to watch “The Genius” scribbling poker notes live on his steel scroll and proffering poker wisdom from under his graduate’s cap and gown. Needless to say, he’s probably get creamed at the table, much like he suffered many an ignominious defeat in the ring.

Think about every “group of buddies” poker scene you’ve ever seen broadcast on a TV show, or that famous scene in Rounders. There’s almost always a cop or sheriff in the mix and the poker being played just isn’t the same without a corrections officer on hand to keep the game on the straight and narrow. Though he’s no longer with us, the Big Bossman, everyone’s favorite former prison guard from Cobb County, Georgia, sure would’ve had a place at my poker table.

What? All the kinds of stuff typical to an awesome home poker game. Wouldn’t you want someone like that playing poker with you? Austin 3:16 says: gimme a hell yeah!

*All images owned by WWE – used here for illustrative purposes only.