If there was a motto for last night’s second annual Variety Charity Poker FUNRaiser tournament, it would have been: Bigger. Better. Bravo!

Last year’s event raised $180,000 for special needs children and was the first of its kind in Israel. Getting around the country’s thorny legality issues had a simple, but unconventional, solution: ALL proceeds went to charity (i.e., players competed for nothing but pride and a token trophy). Having pulled off a successful event in 2018, organizers were looking to enhance this year’s occasion further with increased numbers and volume across the board, and they most certainly accomplished that! 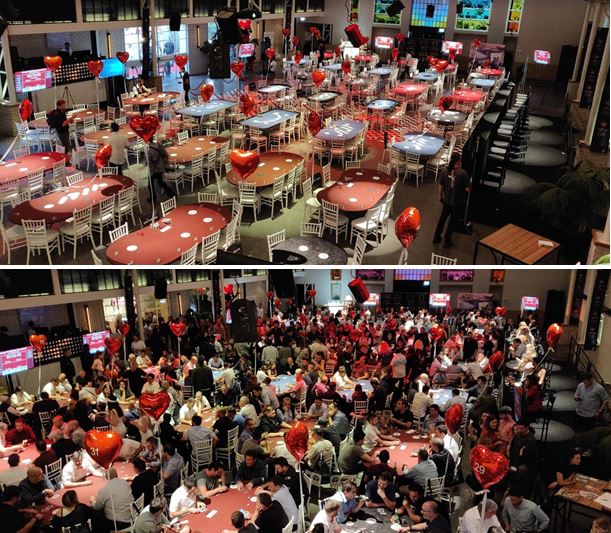 Variety Israel charity poker tournament, before and after player arrivals

A larger venue was secured to house 33 poker tables, where 297 players who had paid the $1,000 buy-in squared off against one another in what could only be described as a loud, thrilling, and joyous evening of poker and fun. As with all charity poker tournaments, a fast-paced structure of 12-minute blind levels with starting stacks of 10,000 and blinds starting at 100-100 ensured the field would be whittled down to a final table by a reasonable hour. Rebuys were also allowed (again, with the full $1,000 being a charitable donation) and taken advantage of by some players who busted early but wished to continue having a good time and rubbing shoulders and matching wits at the felt with local celebs and some big name poker players in attendance.

Adding to the atmosphere, the familiar old school country Western WSOP-themed twang was played each time the blinds went up, and table numbers were denoted by numbered heart balloons, the hearts being part of the Variety Fund’s logo. All in all a grand total in excess of $300,000 (1 million shekels) was raised, a heretofore unprecedented charity fundraising sum that will do wonders to benefit Israel’s special needs children.

The Stars Come Out

Just before last year’s event kicked off, a video featuring a dozen well-known poker players wishing the crowd well and praising the initiative was played to the delight of the assembled crowd. This year, a few well-known stars of the poker world made the extra effort to travel all the way to the Holy Land and show up in person to participate in the festivities. Among the notables were Patrik Antonius, Michael “the Grinder” Mizrachi, and Melanie Weisner.

Of note, each of those poker players have ties to Israel; Antonius’ significant other, Maya, is Israeli, Mizrachi’s grandmother and other family members live in Israel, and Weisner has taken multiple trips to Israel before and has some great friends in the country. I had the chance to catch up with each of them briefly during the event, as they shared their thoughts on being able to attend and support the fundraising efforts:

The Israel Poker Academy (IPA) supplied the dozens of dealers, poker tables, and other equipment needed to execute the tournament logistics — all volunteered, at its own expense — with IPA co-founders Eyal Eshkar, Shai Zurr, and (Cardplayer Lifestyle contributing strategy columnist) Stas Tishkevich (who finished in 16th place) showing up to further represent the poker training school and compete at the felt.

Local celebrities also turned up en masse to play some cards and have a good time, with hundreds of people accompanying the players to rail them during the gala evening.

ALL proceeds go to charity. pic.twitter.com/ssNz9osKDj

Dozens of Israeli hi-tech companies were listed as event sponsors, with many buying multiple tournament seats and awarding them to well-performing employees and managers. All guests enjoyed a wide variety of dinner and drink options, with an open bar and all manner of tasty foods and delicious desserts being offered.

When all was said and done, those who made the final table were given trophies (the largest of which was awarded to the winner) and all participants were given sweet swag bags. Retired Israeli soccer star Yossi Benayoun navigated his way to a very impressive fourth place finish, but Dudi Margi — a well known local contractor (and graduate of the Israel Poker Academy) — ended up hoisting the trophy.

Most importantly, however, everyone who attended left with great memories and the feeling of having collaborated to do something truly praiseworthy.

Michael the Grinder Mizrachi, owner of 4 WSOP bracelets, mixing it up at one of the feature tables

Trophies awarded to the first player to bust, as well as all those who made the final table 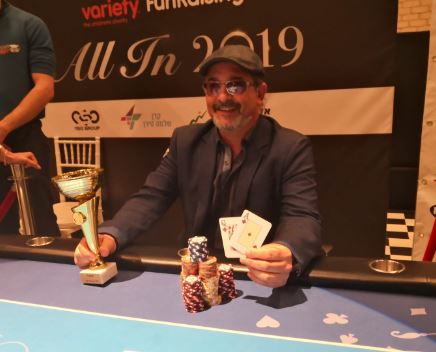