In Poker, Sorry Seems to be the Harshest Word

What do you say when then hand’s all over?

Saying sorry seems to be the harshest word.

I’ve played poker for many years and in that time, I’ve seen every type of hand and player. I’ve been slow rolled; had someone run around the poker room scream with joy after catching a lucky river; there’s even a guy I play with that yells “SEND IT” after winning a pot.

I’ve had my faced rubbed in it, but none of that has ever phased me. I’ve always just sucked it up and moved on to the next hand. That’s been the case whether I’ve been playing in a brick and mortar poker room or on online casino sites.

But the one word that used to take me from Defcon 5 to Defcon 1 in a matter of seconds is the word ‘SORRY’.

I can understand where people are coming from when they suck-out on you. For many people, saying sorry is a natural empathetic human reaction acknowledging they got lucky. In their mind the word ‘sorry’ is a way of diffusing a situation where their opponent is all worked up after the arrow to the heart that the river delivered.

So why does the word SORRY fire me up when it comes to poker? 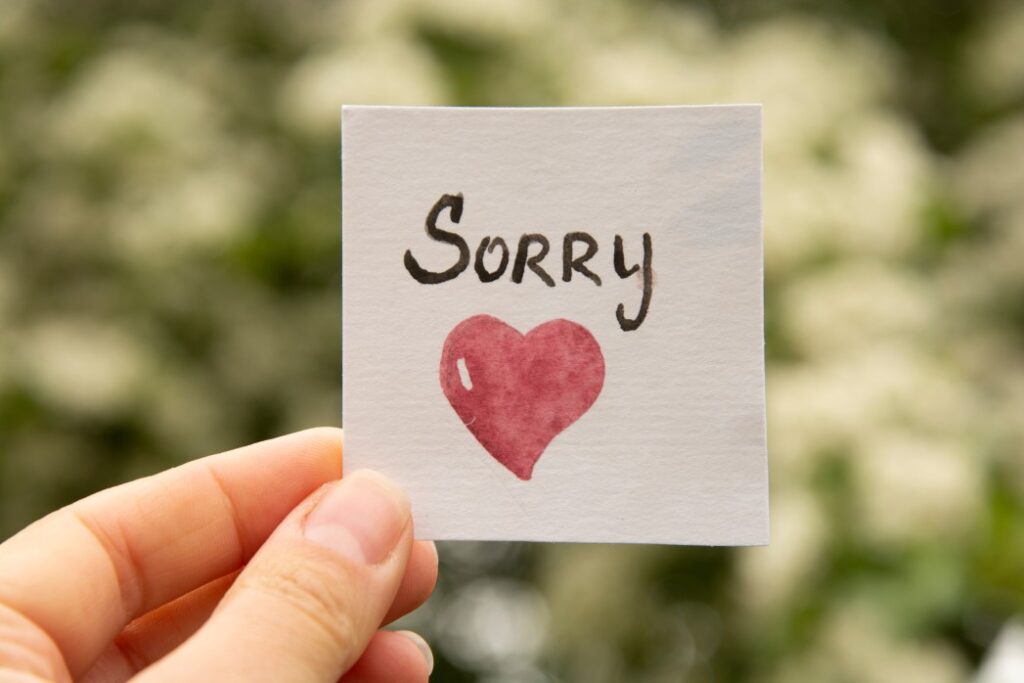 Well, no one puts money in the pot to lose a hand. The hand might be speculative, it might be marginal, but you’re happy to take the gamble and risk to hit your card to win the hand.

If someone accidentally bumped into me then I’d more than accept the apology. I would deem the act of bumping into me, unintentional. Contrast that with a hand of poker and when you decide to make that call, the intent is to win the hand.

In all the time I’ve played poker, I’ve never berated a player for their playing style or choice of cards. I’ve always been of the view that it’s their money and they can spend it how they like. If anything, I’m happy to play against these and marginal hands, because the statistics say I’ll be ahead in the long-run.

If I’ve sucked out on someone, and we all have, I’ll just silently stack the winning chips. If I was in the that exact same situation, I’d want my opponent to do the same. I don’t have a problem with them commenting how lucky they got, as long as they don’t use “the S word.”

I’ve always believed that the lessons on the poker table can be applied to life, and poker is game of outs. When it comes to life giving someone an out means letting them leave a situation with dignity.

I don’t believe saying ‘sorry’ to an opponent gives them any dignity. Many people I’ve spoken to see it as rubbing salt into the wounds

The only time I’ve ever lost it at the poker table was when the gentleman next to me called my big KK raise with 37 of clubs.

I think you know what happened next – he hit trip 3s. At the end of the hand, he was extremely apologetic saying sorry a number of times.

At that moment I started to feel I was having an out-of-body experience. I felt I was being possessed by Robert DeNiro. It was a combination of DeNiro in Taxi Driver, Goodfellas and Analyze This.

‘You talking to me’ was soon replaced with ‘Why are you sorry?’

I’m just glad that for my opponent’s sake I didn’t channel Gordon Ramsay. Having said that, I wasn’t rude, I just explained to him I had no issue with how he played, I just wished when he won, he collected his chips without saying what he said.

After that hand I decided to get up from the table as I was a little steamed up; so much so the dealers glasses started to fog up.

I recall another time I said to a person who just said sorry to an opponent, that because he said sorry, he had to return half the pot to his opponent.

I managed to say this with straight-face, and I think for a few seconds he believed me. The people at the table had a chuckle and we told him in a nice way he shouldn’t be sorry for anything. By then, I’d put away my Robert DeNiro impressions.

To channel Elton John again: “It’s the Circle of Life”. Today, my 78 will crack your AA and next week someone’s 78 will crack my aces.

What goes around, comes around.

The reality is that if I do suck out on someone, I am sorry – sorry I didn’t take more of your chips.