The emergence of esports during the last 10 years has helped take the video games industry to a completely new level. For the first time, the world’s best gamers are being recognised as elite sportspeople and are doing battle in front of millions of eager viewers.

Esports prize pots often total eight figures for the biggest tournaments. With the world’s most successful players competing at games like Counter-Strike: Global Offensive, Fortnite, and League of Legends, making a very healthy living from playing out their passion on a global stage.

With the rise of esports, what were the factors that led to its success? Of course, the growth of the gaming industry at large has been a key factor; however, there are also external forces at work that have helped the world embrace this new sporting discipline. In this article, we will explore how the world of competitive online poker helped pave the way for esports to take its place at the top table of the world’s most popular sporting spectacles. 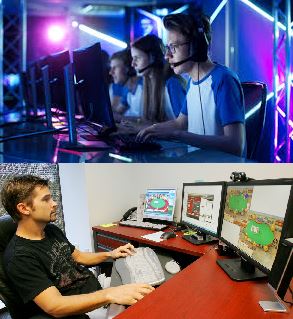 One of the major obstacles faced by esports was its obvious visual distinction from traditional pursuits like football, rugby, and cricket. Played by athletic men and women on vast outdoor expanses, the idea of gamers huddled behind screens at a desk didn’t initially captivate imaginations in the same way.

Poker helped change that landscape. With players sitting around a table peering at their cards and the people in front of them, the action is far less athletic, and you’re unlikely to see a bicycle kick or a somersault, but the tension and excitement is just as real.

Changing visual perceptions was a key part of paving the way for esports to take its place among the world’s elite sports – and online poker certainly played its part making this viable. With its use of on-screen graphics and captivating camera angles, it helped make the card game a little more dynamic, and brought a bigger focus onto the personalities within the competitive pursuit.

There is no denying that strategy is a key factor in many sports. Yet whenever you think of a world-famous sportsperson, you are most likely to be aware of them due to their athletic talent. However, behind the physical talent, there is a game plan that brought them success. Strategy is much less tangible on camera, and harder to quantify for both the viewer and the broadcaster.

Yet poker succeeded in turning psychological warfare into something real, that is witnessable, and which very clearly alters the course of games. Poker is a discipline built around strategy and bluffing. Its popularity with viewers helped to emphasise the importance of this aspect of competition. Strategy is also a key factor in esports, with players spending hours plotting tactics before the game starts. And though the action is far more colourful and fast-paced than your average poker game, the psychological battles are a key part of both sports.

One external factor that has helped esports gather momentum is the buy-in of the betting industry, and once again the world of competitive poker has played its part.

Eager viewers have been able to bet on elite poker matches for many years, and this has helped pave the way for esports. These days, the range of odds available rivals the majority of major sports, with esports betting sites specialising in publishing markets for upcoming esports games and tournaments. As is the case in poker, betting has played a key role in helping new viewers engage with esports, and played a key role in cultivating the competitive community.

As you can see, although esports has grown from strength to strength thanks to the sheer booming popularity of video games, the impact of poker on its recent growth cannot be overlooked. And it’s likely the two disciplines will continue to influence one another for years to come.