Hall of Hands Brings Some Life to Online Poker

Anyone who has ever played a hand of online poker knows that the experience can be fun, but also lonely. Too often, even the best hands you play lack the excitement of live action that you can find in your weekly home game or local poker room. How many times have you played a hand online and tried to explain what happened to your friends the next day…but the thrill of the moment simply didn’t carry over? Hall of Hands is out to change all that by giving you the ability to convert your online poker experiences into a poker show that you can share with the world. 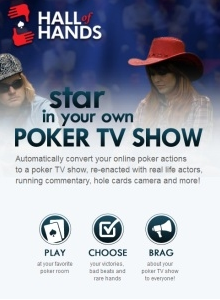 Free to Use, Social in Nature

The people behind this very unique product clearly saw a need to enhance the social aspect of the game of poker. Accordingly, they developed free-to-use software that, upon activation, essentially records what happens at any Zynga Poker table. Zynga Poker currently boasts a player pool of between 30–40 million people and runs primarily as an app on Facebook’s social network.

Anyone running the Hall of Hands online widget can choose to take one of the hands they played in and “convert it” into a made-for-TV mini poker show. Each converted hand boasts running commentary while the action is played out by live actors sitting across each other at a poker table. Soon-to-be-added features of the software will enable additional personalization, such as allowing players to choose the actors representing them in the videos and the location of where the hand was played.

It’s All about Sharing

Most of the fun you’ll have using Hall of Hands will come from sharing your online poker hands with your friends via Facebook or email. There’s an added bonus though in that you can also publish your shows on their website and share them with a worldwide audience, as well as watch some of the most popular poker shows of hands shared by others. In their own words, Hall of Hands “is out to create the world’s largest database of poker hands, while simultaneously revolutionizing online media with new entertainment formats that maximize the excitement of interactive gaming”.

The software can be run from your PC as well as on your mobile phone or tablet (it works on both Android and iOS devices). In our opinion, Hall of Hands will find its greatest success and growth in the mobile market, as it will enable you to share your hands literally with anyone, from wherever you happen to be at any given time.

At the present time, Hall of Hands can only be used to recreate Texas Hold’em hands. While the app can convert up to two hands per hour played by anywhere from 2–10 people in both ring games and tournaments, there are clearly some limitations. Though Texas Hold’em is by far the most popular online poker game, there are plenty of other disciplines like Omaha, Stud games, and Draw games that would be just as interesting when “replayed” in a poker show format. We feel that the developers should consider expanding in this direction in the future.

What about Real-Money Poker Rooms?

Zynga is currently the only online poker software supported by Hall of Hands, and while they’re in the process of trying to get into offering real-money gaming on Facebook, as of now it’s still a fully play money operation. Indeed, as exciting and innovative as this product is, we feel that if Hall of Hands were to be compatible with some of the major real-money online poker rooms, it’s audience would most likely increase exponentially. Time will tell if they choose to progress in that direction.

Update Sept. 28th: Hall of Hands users can now choose which of the 10 character actors will represent them in the videos, plus they can select which of three poker room settings the hand replay will take place in. Nice additions!