Good Job, Stupid: Poker Room-Induced Tilt and How NOT to End a Downswing

Ugh. I’m in the middle of one of the worst downswings I’ve had in quite a while.

That said, don’t make it worse for yourself than it already is. Let me tell you a little story about the stupid things I did last night. 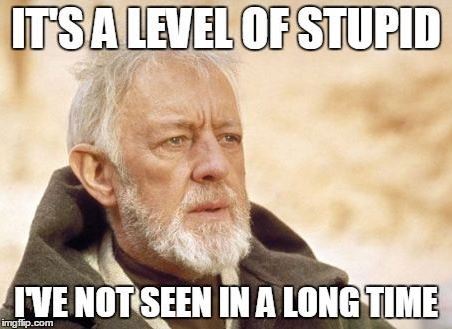 I considered going to a casino that I fully well know treats poker players like second-class citizens. I’ve purposely avoided this casino because I’ve heard the horror stories about endless wait lists, having seen for myself 30- to 50-player deep lists on the Bravo Poker Live app when more than half of the room’s tables aren’t being used.

On the other hand, I’ve also heard the games there are the softest in the area, and I needed to end this downswing. “Screw it,” I said. “I’m going.”

So here’s the timeline of my day before even sitting down:

3:00 pm – I begin my 60+-minute journey to the casino. I check Bravo out the door and phone ahead for a spot on the NL lists that are now 30 and 20 deep, respectively. There are still only one of each table running. They’ve got to open more tables soon, right?

3:30 pm – As I stop for coffee along the way, I have the option to change course and go to my regular casino instead. The games likely won’t be as good, but I’ll be able to sit almost immediately and get more hours in. I decide to stick with plan A. I need the juicy game to end this downswing. This seems like a good decision at the time…

4:30 pm – I arrive at the casino just under the wire for check-in. The $1/3 and $2/5 lists are now 43 and 24 players deep, respectively, and there is still just one table of each game running. I ask the room manager what the deal is with this nonsense and get a very corporate, runaround answer as if I’ve never been in a poker room before. Oh yah, and I’m told they can’t get any more dealers in until 6:30 pm. Ridiculous. I’m 20th and 12th on the respective lists. Guess I’m going to get an early dinner. 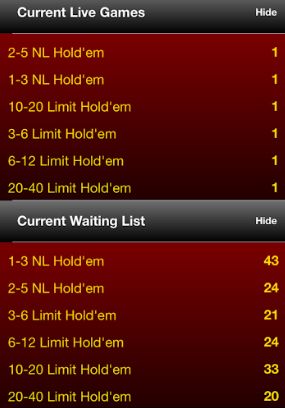 7:00 pm – the damn $1/3 table still hasn’t been opened and the $2/5 list hasn’t moved. It’s somehow taken management a half hour to open the $10/20 table, at which they’ve just begun seating, and they’re planning on opening the new $1/3 table afterwards. Why they can’t open both at the same time in a room with just six total tables running? I…I don’t know.

7:30 pm – they finally call for the new $1/3 table. I’m at the top of the list for the $2/5 game, but I decide to just play the $1/3 though because (in case you haven’t figured it out yet) I’m on blind raging insane f***ing monkey tilt already and I haven’t even been dealt a single hand.

So, after all that, cards are finally in the air.

Now I’m not going to say all the waiting crap I’ve put up with has been worth it, but the stories were true. The game. Is. Amazing.

Nothing but maniacs, calling stations and the rec-iest of rec players. Marginal top pairs are blasting in stacks, bad draws are piling away, shortish stacks are open-shoving $100 at a time. It’s a poker dreamland. I don’t have to do anything cute tonight. Just pick up a couple of hands, and I’m Donald Duck walking away counting his money.

But that’s one of those things about a downswing… The cards ain’t coming.

Most pots are going at least six ways, but I can’t flop a pair or decent draw to save my life, let alone anything better. Turns are going three to four ways, so bluffing opportunities are virtually non-existent. I can’t even pick up a pair or a decent ace or king high against the guy open shoving $100 at a time.

Now before this article devolves further into a steaming pile of bitching and moaning, I assure you that the punchline and the moral of the story are coming.

Despite the game being so good, I stayed longer than I should have. I was way too tired and unable to realize that I was playing on auto-pilot. My brain had basically shut off. The entire frustrating day had taken its toll, and as good as the game still seemed, I had become the mark.

Two players in middle position as well as the cutoff all limp, I look down at A4 offsuit in the big blind; whatever, I’ll check. The flop comes A62 rainbow. I check and it gets checked through. The turn brings another 6 with a potential backdoor flush draw. I continue playing passively and check. Again, it checks through. The river brings another ace. Looks like I’ve finally made a hand. Problem is, obviously no one has much of anything. Guess I’ll just bet it and drag the $12. I put out $10, the two middle position players fold, and then the cutoff min-raises to $20. Oh great, I guess I’m chopping, unless he has a questionably played 6 maybe?

Now remember that part about my brain shutting off? Well check out this GTO play…

I fake tank a few seconds, then lob a $100 chip up like a Steph Curry 3-pointer saying, “and this one too”.

Am I at a home game? Have I never played poker before? I might as well have said “I’ll see your raise and make it…”. And what kind of stupid raise size is that anyway? Holy moly.

Obviously, since I just rainbowed in the one $100 chip and didn’t say the word “raise,” in any casino (even one run as questionably as this one) this is just a call. Yah, I failed to register that simple fact.

My opponent rolls over a pair of 10s and, in my stupid brain, thinking he’s open-folding a failed bluff, I pull back my bets and push forward my cards, still face-down(!)  As I put my two red and one black chip back in my stack, I notice that the dealer has pushed the rest of the pot to the other guy and my cards are in the muck.

I still hadn’t registered what I’d done. I actually argued that the dealer had ruled incorrectly and prematurely mucked my cards. After a bit of back and forth, what little power remaining in my brain flicked on the ‘ol lightbulb momentarily so I could realize what had happened and have an all-time ‘oh s**t’ moment at the table.

I tossed my opponent the $20 I owed, apologized to him and the dealer, and racked up sheepishly. Yup, session over. I’m an idiot.

So why am I sharing this embarrassing moment with you all? Um, well, I guess I want my story to be a different sort of reminder that decision making (in various forms) and maintaining focus are pretty important in poker.

Oh, and self-induced punishment for being so freakin’ dumb.