Get to Know the Poker Media: Jon Sofen

It’s been almost six years to the day that our ongoing Get to Know the Poker Media series debuted, and while we’ve profiled over 40 poker media members, we’ve still got plenty more to go, all of whom deserve some time in the spotlight. I’m proud to say that our latest installment in this series shines the light on a former Cardplayer Lifestyle contributor, Jon Sofen.

It always brings me joy to know that someone who got their start in the business via this platform has continued on to a full and proper career in the poker industry, and is still actively writing so many years later.

Jon’s been a fun colleague to see from time to time on the poker circuit, usually in Las Vegas, but our latest meet up happened at Choctaw Durant during the 2022 World Poker Tour Choctaw Main Event. Working alongside him once again made me realize that he’s been long overdue to feature in this miniseries.

Without any further ado, I invite you to get to know Jon Sofen a little better.

How did you first get into the poker industry and for how long have you been doing it?

I can’t recall the exact year but I believe it was 2014 and my first exposure to poker media was right here at Cardplayer Lifestyle. I’m one of the lengthy tree of poker writers who began their journey via this site. Don’t ask me to tell you what my first article I wrote for you was because I can barely remember what I wrote about yesterday, let alone eight years ago! Ed. note: Found it! 😁 5 Qualities to Look for in an Online Poker Site.

What poker outlets have you been involved with and which has been your favorite (one-time or ongoing) gig over the years?

Like many in this industry, I’ve written for a number of poker sites, most notably CardsChat, Poker.org, and now PokerNews, where I’m their Senior Editor, U.S.

CardsChat was an enjoyable and learning experience because when I started back in 2014, I came from a professional writing background but had virtually no news writing experience. I cringe when I look back at some of the news articles I wrote back then. I think, “did I really write that garbage?”

Over the years, I sort of taught myself the gig and also had a great editor in Dan Michalski who is a grizzled veteran in poker media and journalism in general. He taught me a lot about how to write a lead and allowed me to expand my horizons into covering the more creative stories that poker fans want to read.

There’s just no beating PokerNews in this industry, and that isn’t an insult one bit to all of the other sites that do a great job of growing this game. In particular, when PokerNews offered me the job in August, I couldn’t pass up the opportunity to work alongside a past champion of the prestigious WSOP Casino Employees event in Chad Holloway.

As a player, I love the adrenaline rush that comes with going on a heater. I’m just kidding, I have absolutely no idea what it’s like to go on a heater. But it sure sounds like fun!

As a writer, I like that no two days are the same. One day, there isn’t much to cover so I just relax. And the next day Phil Hellmuth threatens to burn down the casino and a major cheating scandal breaks out. Either way, it’s a good day for me.

What sort of job(s) – if any – did you have before getting into poker?

I was a freelance writer before poker for about five or six years. You name a topic, I’ve probably written about it (gambling, sports, insurance, dating advice, etc.). But nothing was lamer than my first writing gig, which entailed writing funeral planning advice. There probably isn’t a topic I’m less interested in or less qualified to discuss but someone offered to pay me for it, and I can’t say no to money.

I’m from Iowa (GO HAWKEYES!) but have lived in Las Vegas for the past 10 years. In 2012, I moved here just for the summer. It’s been a pretty long summer.

I don’t have any kids that I know about, nor have I ever made the mistake of getting married, but I do have a beautiful and loving girlfriend, Wendy, for the past eight-ish years. And two awesome and cute but poorly behaved little dogs named Sluggerrr and Halo, named after the Kansas City Royals and Los Angeles Angels mascots.

I don’t play poker much these days. Some months not at all, other months I’ll play a few times. Sometimes I miss the days of playing 40-50 hours a week, but those days are in the past. I still enjoy the game in moderation.

Although I’d love to win a big poker tournament one day, I don’t have the patience for tournaments, so I mostly just play some $2/$5 (or $5/$5) NLH cash games.

My favorite poker rooms are Aria, Bellagio, and Wynn in Las Vegas, and I also love the Hustler in Los Angeles. 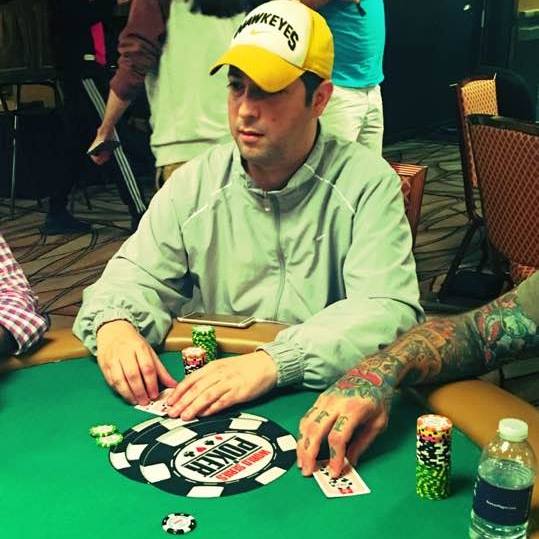 What’s the biggest misconception people have about people who work in poker media?

This is a tough question to answer because I don’t really know what people think of those who work in poker media.

Do you do any other sort of work (side gig), writing or otherwise?

Outside of playing poker, I like to buy and sell sports cards. The PokerNews gig does just fine paying the bills, so I don’t have to spend time on other stuff.

My biggest hobby is being a sports fan. I’m a die-hard Iowa Hawkeyes and Kansas City Royals fan. Probably the most passionate fan of those two teams you’ll ever meet. I love poker with a burning passion, but there isn’t anything in this world better than the spending an afternoon watching baseball.

What do you enjoy doing coverage about most in poker – lifestyle/feature pieces, op-eds, promotional stuff, tourney recaps, live/online poker news, or live reporting?

The stories I most enjoy covering tend to involve drama and controversy, or just about anything related to the World Series of Poker. I enjoy those types of stories because they generate the most interest. Plus, they’re less cookie-cutter and give me an opportunity to show some creativity in my writing as opposed to tournament recaps and other less juicy topics.

I don’t really have a poker bucket list, so I’ll say my top general bucket list item is to catch a game in every Major League Baseball stadium and every MLB team in person. Somehow, I still have yet to see the New York Mets in person, and it’s the only team I still need to cross off the list. I wish they’d stop building new stadiums as it makes it tough for me to ever catch a game in every stadium. 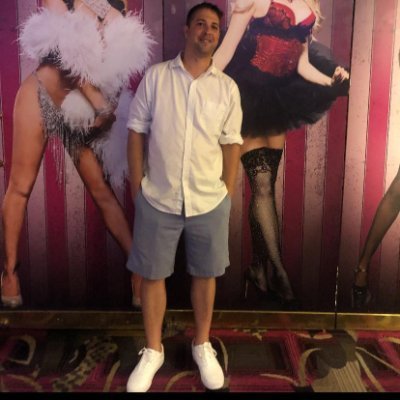 This is such a horrible idea to ask me this question because I have so many strong opinions on many issues, but since you asked, here we go!

I think I’ll stick with the sports theme here instead of poker. One thing that just irritates the heck out of me is the never-ending LeBron James vs. Michael Jordan debate. Not only is it pointless to argue something that can’t be proven, I find very few takes on social media related to this issue that are even remotely reasonable.

As a 1990s Bulls fan, I can admit that I’m a little biased and consider Jordan the greatest of all-time. But the issue I have with many basketball fans these days is they act like because, in their opinion, LeBron is inferior to MJ, that somehow means LeBron is trash. Or, at least, that’s the impression they give off with their ridiculous takes.

Folks, LeBron’s pretty much indisputably one of the top two players in history, and if he isn’t as great as Jordan, that doesn’t mean he sucks. His stats are unreal, and he carried a couple of truly horrendous Cavs teams to the Finals, and then carried the Cavs to a title in games 5 and 6 in 2016 against the supposed greatest team ever (Golden State), his third of four titles.

Sports fans these days have been brainwashed by mouth-breathing ESPN and Fox Sports commentators to believe that one player can carry a team all alone. Michael Jordan didn’t win jack squat until he had Scottie, and his final three titles were on a team that had two other future Hall of Famers (Pippen and Rodman) and some quality role-players (Harper, Kukoc, Kerr).

When Jordan was banned from the NBA for gambling — just kidding — retired for the first time in 1994, the team he left went on to make the playoffs without him. After LeBron bolted from Cleveland to Miami, the Cavs were embarrassingly bad, and then were once again after he left town to sign with the Lakers.

That doesn’t mean I think LeBron is superior to Jordan. In fact, if you asked me who the greatest of all-time is, I’d tell you MJ. But my point is that those who talk down on LeBron and try to discredit his greatness are out of their minds and probably shouldn’t be taken seriously on just about any sports topic.

There you go, end of rant!