Duel By PokerStars App Deals Everyone A Winning Hand

One of the coolest things about my having attended the 2016 PokerStars Caribbean Adventure was getting an invite to a media-exclusive event. Every media member in attendance was asked to sign an NDA, so, right away I knew that some sort of big announcement was going to be made. We were also told that a media embargo would be in effect until PokerStars themselves decided to make the news public. After having had to keep the secret for over a month (and this review saved in my Drafts, waiting to be published), today is the big day.

Finally, the big reveal: A brand new mobile product called Duel By PokerStars, which you should read more about in the news piece I wrote up for PokerUpdate.com. Having had the privilege of hearing about it directly from its designers and testing it out in person at the PCA, what follows are my thoughts on the new product as well as some exclusive pictures. If I had to choose just one word to describe Duel By PokerStars, it would be “delightful”.

My Impressions of the Product Presentation

The main product presentation was made by Chris Straghalis, PokerStars’ Associate Director of Poker Projects and Innovation, who explained to everyone assembled what the product was all about. I had a very interesting discussion with him after the presentation as well. He told me that the timeline for the app’s development, from brainstorming the idea until the app’s release, spanned longer than a year and that over two dozen PokerStars designers, technicians, and developers, have been working on the project full-time. 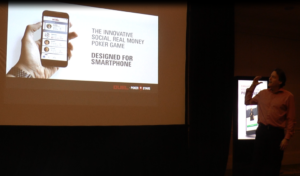 It’s clear as day that PokerStars will be pulling out all the stops to market this product. They corralled Team PokerStars SportStar (international soccer phenom) Cristiano Ronaldo, for an extensive photo shoot and it seems as though he’s going to be the official face of the mobile app. Surely, we’ll soon see the Internet plastered with images of all of the company’s Team PROs playing the game as well.

What made the greatest impression on me was this: PokerStars is already the world’s leading online poker company by a huge margin. Of course no market leader rests on its laurels, but when they invest over a year’s worth of time, effort, and money into a new product, they truly believe it’s something special.

People will be talking about this tremendous poker innovation long after today’s launch and Duel By PokerStars will absolutely succeed in introducing poker to legions of new players.

My Impressions of the Demonstration

Team PROs Chris Moneymaker and Fatima Moreira de Melo were in attendance to demonstrate the product. While the demo felt a bit too drawn out for my taste, their excitement about Duel By PokerStars seemed pretty genuine to me. In other words, it wasn’t just a case of paid spokespeople pimping their patron’s newest creation. 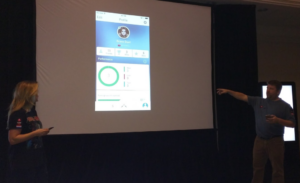 To me, it appeared as though Chris, Fatima, and numerous other experienced poker players within the company – both professional and recreational – took part in the development of this product. In other words, this was EVERYBODY’s baby, and they were legitimately thrilled to finally be allowed to show it to people outside the company. I can only imagine their excitement today for the official Duel By PokerStars launch.

Why Will Duel By PokerStars Succeed?

This will speak to many of us out there who are products of the Moneymaker Boom: we ain’t 21 years old anymore – our lives are lot more full than they used to be. As much as I personally love playing poker, I simply don’t have as much time to play as I used to. Once you have a family and a career, life just gets too busy and time is at a premium.

But we still have a few minutes to play games on our phones here and there. We play these games every day. There’s a reason that heads-up games like Words with Friends are so popular: they tap into people’s competitive drives to oust one another with their skills. Most importantly, perhaps, you can decide to play whenever you want for however long you want. Then you can put your phone away and get back to your busy life.

Duel By PokerStars was specifically designed to accommodate today’s “mobile lifestyle”. Whether you’re waiting in line for something, taking a 5-minute break at the office, or (and I know nobody wants to say this, but) sitting on the toilet, this app allows you to whip out your phone and play poker without making any sort of lengthy commitments. In short, it’s an app that speaks to us. 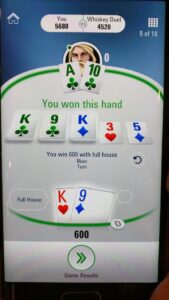 Moreover, as much as poker remains something that’s “about the money”, Duel By PokerStars seems to be about having fun more than anything. There won’t be any high stakes duels either; just low stakes and free play games. This is precisely what will speak to recreational players and get them to play more poker.

You Can Play Poker against Anyone, Including Popular Pros

You read that title right. If you’ve always dreamed of getting to play poker with your favorite players who you’ve seen on TV, now’s your chance. You don’t need a million dollar bankroll, a special invitation to a private game, or a plane ticket to Las Vegas. This app allows you to just challenge Chris Moneymaker to a duel. Or Vanessa Selbst. Or Daniel Negreanu. 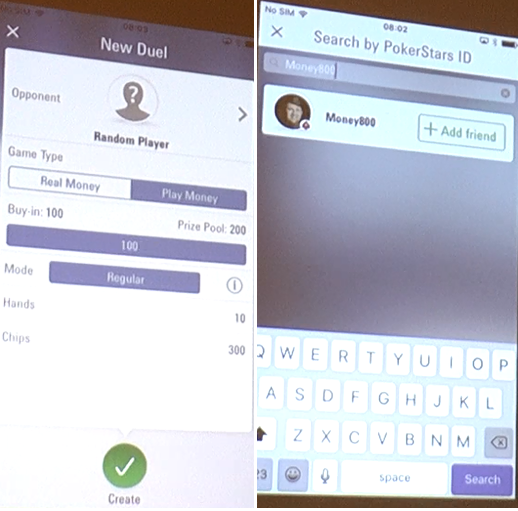 As you see above, you can search the entire PokerStars database and challenge anyone with an account. As Chris Moneymaker illustrated, you just type in the person’s screen name, add them as a friend, and once they’ve accepted you can challenge them to a duel. While setting up the duel, you can select how many chips you’ll start with (per hand) and decide whether you’ll be playing for free or for real money. Moneymaker went on to say that ““I love being able to play it so easily” and that Duel By PokerStars “manages to represent the depth of poker that I love.”

Duel By PokerStars is a refreshing innovation in poker that’s been a long time coming. It becomes available today in Norway and will soon be rolled out all over the world.

What PokerStars has done here is grab our collective attention by challenging us to a duel. I have no doubt that millions of people around the world will accept.

Awesome article, but a quick question/concern, do the same “location” rules apply? As it is now, unless something changed and I was unaware, only New Jersey residents in the US can play on Pokerstars. Is the same true for the Duel app? Thanks

Thanks for checking out the article. Gotta say, I think (not 100% sure, but I think) that the app was subsequently pulled for some reason. Not sure it’s available anywhere anymore (which I think is a shame…. I really enjoyed testing it out a couple years back).

Probably not the answer you were hoping for, but that’s what I know at this point.

P.S. Currently real-money play on PokerStars in the US is restricted to New Jersey; correct