Daniel Negreanu Twitches and Puts the P(ee) in Poker

Unless you’ve been hiding under a rock for the last couple of months, you know that Twitch is officially poker’s newest “big thing”. The latest poker star (see what I did there? :-)) to jump on the Twitch bandwagon is one of the brightest of them all; none other than Daniel Negreanu. 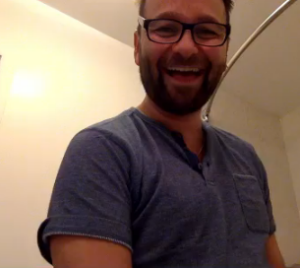 A couple of days ago he announced that he’d be live Twitching himself playing the Sunday Million. Though he experienced some technical difficulties throughout the stream, mainly because he had to deal with a spotty hotel Internet connection, the stream proved informative and entertaining, as could be expected. On the entertainment side, viewers were treated to some pretty hilarious impressions of ElkY and Jason Somerville and regaled with a number of stories of Daniel’s poker career – you know; “typical Negreanu stuff”. Plus, he wasn’t at one of those “grind stations”, but rather playing while laying in bed for most of the time.

If you haven’t already done so, you can subscribe to Daniel Negreanu’s Twitch channel here. He ended up live streaming hours of $400/$800 mixed game play, which proved to be very interesting and which – in this writer’s opinion – is likely to get Hold’em diehards to try and open up a bit to start playing additional types of poker games.

What was somewhat unexpected to the thousands of viewers who tuned in to watch Negreanu playing poker online, was a stream of a, uh, different variety, as RealKidPoker let us accompany him to his bathroom, where he proceeded to urinate. As a poker fan who has followed Negreanu for years, I’ve never seen someone so openly reveal a leak in his game…