Several years ago, cryptocurrency was an idea whose uncertain destiny was yet to be determined. Today, crypots are no longer an obscure topic and most people with at least some tech knowledge are at the very least aware of some major types of cryptocurrencies, such as Bitcoin.

Online gambling and online poker have played an important role in helping bitcoin become what it is today. These days, there are dozens of card games sites where you can play with bitcoin in one way or another. While it was initially an alternative for people who didn’t have access to other banking options, these days many players choose to play with bitcoin for various reasons, such as speed of withdrawals, a greater degree of privacy, etc.

All in all, you should have no problems finding a card games site that accepts Bitcoin and fits your needs and expectations these days. The three we briefly review in this article are most likely to fit a majority of players but there are other options out there as well if you’re not happy by what’s offered here. 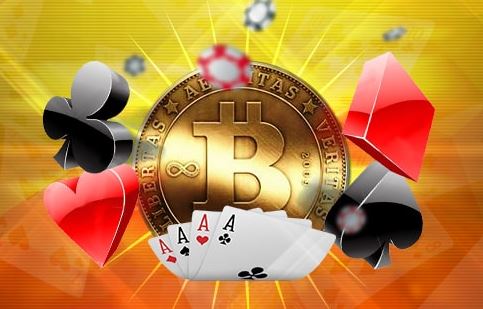 Launched back in 2001, Americas Cardroom has been around for a while. The site was one of the early adopters of bitcoin, primarily as a way to make it possible for US players to deposit and withdraw funds and avoid various restrictions that came about after the UIGEA.

These days, ACR features a wealth of options for players of all shapes and sizes. The rich online tournament schedule is coupled with a versatile offering of cash game tables featuring poker variations such as Texas Hold’em, Omaha, Omaha 8, 7 Card Stud, 7 Card Stud 8, and 6+ Hold’em.

In addition to this, the site also features a variety of promotions and bonuses for players to take part in. While ACR may have had its problems over the years, it still remains a card game site that accept bitcoin deposits.

Bovada Poker has been online since 2004 and it is one of the better known names in the world of online poker. Like ACR, Bovada has been heavily focused on the US market (despite its short departure in 2016) and, as such, has introduced bitcoin as one of their favorite deposit and withdrawal methods.

Bovada has managed to get their affairs in order in the banking department, becoming one of the fastest-paying US-facing sites with regards to bitcoin withdrawals. Unlike some other cardrooms, which still made players wait despite all the possibilities provided by new technology, Bovada has managed to set up a system where cashouts to players’ BTC wallets are almost instantaneous.

Ignition Poker came to life during the short period of Bovada’s absence. It was meant to be the substitute for Bovada, taking over the US share of the market. Although Bovada later came back, Ignition lived on as a standalone poker site and continues to exist as one of the leading US-facing operators.

This particular site was offering bitcoin deposits right from the get-go. Realizing particular needs of their main target market, Ignition made sure players could use the most popular cryptocurrency to top up their accounts and cash out their winnings in a simple, reliable, and, most importantly, safe manner.

These three operators are among the leading card game sites that accept bitcoin deposits. While none of them is perfect they all also have something unique to offer to the players, with the common bond being the ability to transact in cryptocurrencies. Players new to bitcoin deposits will also find a wealth of resources on the topic provided by the operators, making it easy to get started and slowly enter the world of what could be the future of online transactions.

*Disclaimer: Cardplayer Lifestyle does not actively endorse cryptocurrency investment or patronage of US-facing online poker sites that are not fully licensed and regulated.