Ed. Note: Cardplayer Lifestyle would like to thank Joe Slabaugh, of Potter & Potter Auctions, for contributing this article.

Besides being heads of state, Herbert Hoover and Napoleon Bonaparte seem to have shared the same taste for finely made gaming chips that countless card players have also developed.

At least that much is to be gathered from the auction of gambling memorabilia this Saturday, May 21, by Potter & Potter Auctions of Chicago. The sale includes 549 lots of antique playing cards, rare gambling books, cheating devices, gambling equipment, poker chips, artwork, and vintage advertising. 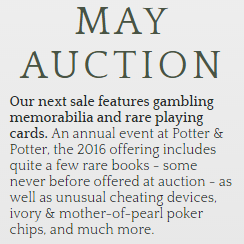 The sale in fact goes a long way to highlight how poker, to a degree higher than most sports, always left itself open to personalization. While the equipment is by now standardized – a table, a deck of cards, and a stack of chips – its appearance and that of its players has known no uniform.

One of the first collectors to take serious notice of the endless aesthetic variation to be achieved in the design of a poker chip or gaming set, Dale Seymour, consigned much of the most important material, including the aforementioned chips, plus 19th century American frontier-era examples of scrimshawed ivory poker chips. Seymour authored a well-known reference work on the subject, Antique Gambling Chips, in which these and many others of the chips in the sale first appeared. 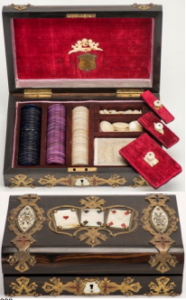 Seymour ranks the pair of Napoleonic chips (Lots 393–394), which bear an imperial bee symbol at their centers, among the rarest in his collection. By way of authentication, Potter & Potter adds that these examples were separated long ago from the larger matching set of the emperor’s chips now housed in the collection of the Wallace Museum in London. Their pre-auction estimate is $3,000–5,000 each.

The auction opens with a section of collectible books, the most desirable being first editions of early twentieth-century works exposing crooked gamblers’ methods of cheating, including The Little Secrets (Lot 4), The Expert at the Card Table (Lot 34), Koschitz’s Manual of Useful Information (Lot 71), and Treatise on Advantage Card Playing and Draw Poker (Lot 103). Those titles are estimated to snag several thousand dollars apiece, but the majority of titles in the book section should sell for between $100–300.

Like the literature, the bidding on objects and equipment linked to cheating is expected to be fast and furious, and in the second half of the auction a separate section has been devoted to these tools of the cheater’s trade.

Two cold-deck holdouts (Lots 331–332), manufactured approximately 100 years apart but operating on about the same principle, are devices that secretly deliver a stacked deck of cards into the player’s hands. The antique example is estimated to bring $2,500–3,500.

Lots 333–337 are Kepplinger holdouts. The leadoff example is a truly rare example from the late 1800s that incorporates a special sleeve guard design that went further than other devices in ensuring against detection around shirt cuffs.

Dice edgers, a gaffed keno goose, and a matchbox equipped with a tiny mirror to read cards as they were dealt fill out the same section.

A copy of the catalog is available for download (or you can purchase it on the Potter & Potter website). Contact and bid information is also available online. Bids can also be placed through several online auction platforms, including Liveauctioneers, Invaluable, and via Bidsquare.