The World Poker Tour World Championship Main Event has just gotten underway and there’s a distinct “Big Event feel” in the air that’s typically reserved only for the most exclusive and top-tier happenings in the poker industry.

So, in that sense, sitting here in the (awesome!) media room, it’s already a special day, but for me there’s something even more special afoot, namely that I have the pleasure of documenting and covering the player experience that my Dad, Dr. Josef Strazynski, is having here. You might remember him from interviews such as these. 😊

Having traveled 7,500 miles together with him all the way from Israel to get here and be his roommate — being both a poker media professional as well as his son — by definition gives me the most unique of perspectives to witness his entire player experience firsthand. That’s something I have been and will continue to be documenting on social media as well as right here on Cardplayer Lifestyle throughout our time here in Las Vegas.

But before we get to his actual gameplay – he starts tomorrow, on Day 1B – I wanted to give you all a peek into how Dad has prepared for this big moment over the last few weeks since having learned he won a prize package to play.

Dad wasn’t even aware of Amanda Botfeld‘s Twitter competition in which I nominated him to win the prize package from WPT Global. So when Amanda reached out to contact him, he was absolutely beside himself to be told the news that he won.

This is Josef Strazynski, a 74-year-old doctor living in Israel who helps patients suffering with diabetes.

Watch his reaction to finding out he just won a $10,400 ticket to play in the World Poker Tour, and will be flown out to Vegas with his son, @cardplayerlife.✈️♦️ @WPT pic.twitter.com/LoS5DHdcgQ

Shortly afterward, Dad and our home game buddies got together for a game to celebrate the auspicious occasion.

Dad is celebrating now with our home game buddies!

The Doctor Enters a Different Kind of Lab

From the moment that home game ended, Dad has been in full-on prep mode, studying during every free moment he has when not working in his medical office. At 74 years old, Dad’s still a practicing physician. He specializes in rehabilitating the limbs of patients with diabetes such that instead of facing amputation, they often end up being able to walk again. 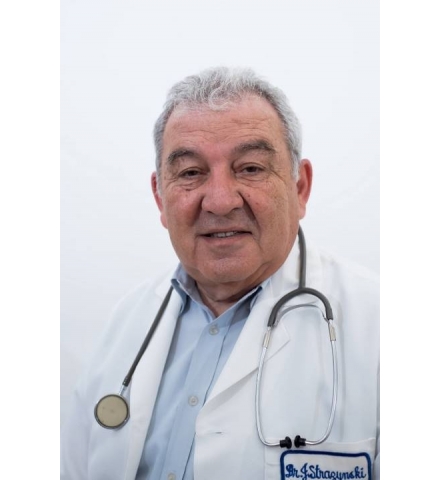 WPT Global was kind enough to provide all their prize package winners with a free 30-day subscription to LearnWPT, and Dad has been “in the lab” making use of numerous training videos for the past month. In particular, he’s had a fondness for those featuring Tony Dunst. You can imagine Dad’s delight to have met Tony and have had an in-person conversation with him at the WPT Players Party!

Last time I sat and studied ANYTHING with my Dad @StrazynskiJosef, I was in grade school.

After playing for decades, for the first time in his life he’s studying poker in prep for taking his seat at the $10K @WPT World Championship.

I’m so proud and inspired.

Beyond also having utilized some additional training materials from Pokercoaching.com, Dad was fortunate to have been gifted a 1-hour one-on-one coaching session with the site’s founder Jonathan Little, the consummate and accomplished tournament professional and poker coach. I sat in on the sessions and watched as Dad internalized a number of strategies and tips that Jonathan shared. Dad’s been playing poker for over 40 years, but that’s been exclusively limited to cash games. As such, his specific area of focus has been learning the critical differences between cash game vs. tournament play.

Since Dad @StrazynskiJosef won the @wpt_global prize package via @amandabotfeld‘s giveaway to play in the @WPT World Championship, he’s been on a crusade, practicing and studying hard!

Massive thanks to @JonathanLittle for so kindly giving Dad an hour of his time & coaching. pic.twitter.com/2yXbsZ5og0

Studying and learning is one thing, but implementing all those lessons is quite another. As we unfortunately don’t have any brick and mortar poker rooms in Israel and as playing online isn’t legally possible either, Dad’s been practicing on free play site Replay Poker. While obviously not the same thing as playing for meaningful stakes, the fact that he’s been able to actually practice tournament play on the site has been nothing short of transformative for him.

Plus, our home games are always a mixed game affair. By my estimation, at this point Dad’s now probably played just as many Hold’em hands online in the last few weeks as he has mixed game hands over the last 20 years. Quite frankly and honestly, he’s many times the poker player now than he was just a few short weeks ago.

One might think that after weeks of intense study and practice, a not-yet-retired 74-year-old would take the opportunity to relax at least a little during the 20+ hour long transit from Israel to Las Vegas… but Dad had other ideas.

I’ve joked with some poker media colleagues that over the last few weeks, each time I’ve spoken with my Dad our conversations — instead of being “hi Robbie, how are you doing?” — have become “hi Robbie, how would you play this hand?”

While I’ve genuinely loved how serious Dad has taken this once-in-a-lifetime opportunity to play in the WPT World Championship Main Event, I’ve also strongly encouraged him to enjoy the experience, and reminded him that he’s on a 100% freeroll. “Worst case, Dad, you might not win the tournament or even cash, but it’s not like you’re losing $10,000. I want you to have a great time and experience.”

So, when Dad went a little too hard on himself after busting out of his “official” practice tournament today, I made sure to point out the positive side:

Since we’ve landed here in Las Vegas, I’ve seen Dad finally exit “prep mode” and now be able to “take it all in.” Firstly, we went to the WPT’s Player Party, which was over-the-top fantastic. Dad’s visible delight at meeting so many of the famous faces he’s been watching on TV for all these years, like Vince Van Patten, was undeniable.

Dad and I had a really great time at the @WPT Players Party at @AREA15official tonight.

After 20+ hours of travel and a day full of errands, seeing and reconnecting with so many familiar faces was an awesome way to end the day.

Props to the organizers for a phenomenal party! pic.twitter.com/C4lhlRXttq

Then, we toured the Encore Ballroom, where the tournament action is taking place.

Dad plays Day 1B of the #WPTWCWynn tomorrow.

Today, in addition to playing a practice tournament, he came to scope out the @WynnPoker playing area at Encore to see what awaits him.

He’s SO happy and having the most amazing experience!

It was so cool watching Dad’s face light up as he walked down the impeccably decorated WPT-branded hallways. He pointed to a gleaming object in the distance saying “That’s the Mike Sexton trophy!”

He walked around the immense, exquisite ballroom, full of poker players and echoing with the unmistakable sound of chip shuffling, and exclaimed in incredulous disbelief “that’s going to be ME tomorrow, sitting at one of these tables?!”

Dad’s also shaken hands with and met the top WPT folks, including CEO Adam Pliska, VP of Global Tour Management Angelica Hael, and Executive Tour Director Matt Savage, all of whom mirrored his beaming countenance as Dad shared his excitement “just to even be here and experience this amazing event.”

He hasn’t even taken his seat yet, but it’s pretty clear from where I sit that Dad already feels like a WPT Champion.