Poker is more than just a casino. It’s more than a bracelet or a $25,000 high roller. Or a last longer bet. Or a ranking on the Hendon Mob. No, for many, poker is about family and friends.

For 33-year-old Kevin Wood, his grandfather Frank Hoerst Jr. was not only someone who he looked up to, but who taught him about those joys so many young men and women learn from their grandfathers and grandmothers – a little vice to keep life interesting. From cards to horse betting to video poker, Kevin was mesmerized by Frank growing up. 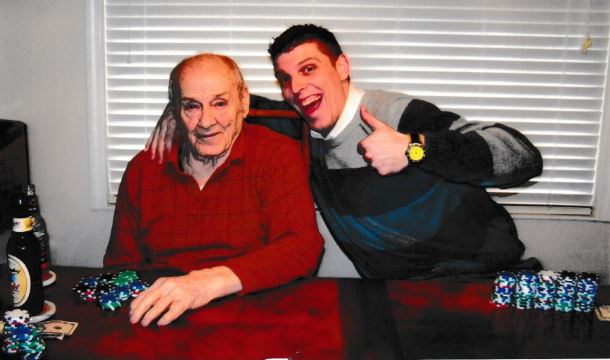 Kevin with his grandpa, Frank Jr.

Frank passed away on January 31, 2018 at age 92 and Kevin shared with me a bit about his amazing life, much of which revolved around poker, gambling, and plenty of time with family. It’s a life many young people might not be able to fathom – from entering the military at age 17 and being shipped off to fight in World War II to struggling through the Great Depression.

Life was definitely not easy for many Americans during the Great Depression, which lasted from 1929 to 1941. By 1932, more than 20% of Americans were unemployed. Times were tough for the Hoerst family in Reading, Ohio, just outside of Cincinnati.

Growing up, Frank was very athletic and competitive in high school on the football field and baseball diamond. But like many young men in the early-1940s, duty to one’s country and family called. He joined the Navy in 1942, at the age of 17. 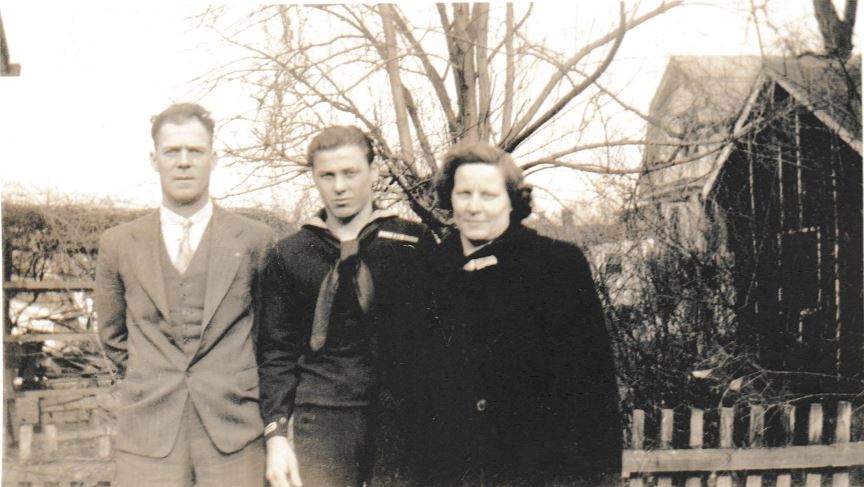 Frank Jr., pictured with his parents, upon entering the U.S. Navy

“He always said that one of the biggest reason for joining is for the benefit of his parents,” says Mike Hoerst, Frank’s son and Kevin’s uncle. “He viewed his entry into the Navy as a way to help his parents save money – by not needing to provide for him.”

Frank spent a majority of his time on the U.S.S. Herndon, a destroyer-class vessel. As a member of the crew, Frank sailed all over the world – highlighted when he was stationed offshore of Normandy during the  D-Day invasion on June 6, 1944. The ship sailed just off Omaha Beach, ahead of the first assault waves, and encountered heavy fire from enemy batteries. The ship provided heavy fire on enemy targets onshore. The Herndon remained off the Normandy coast for 13 days providing fire support, screening troopships, and anti-submarine patrol.

No doubt the realities of war were quite an experience for the teenager, but it was a story that many of the Greatest Generation told. With so much destruction and the thought that one of your friends might not make it home, many of those servicemen turned to a little trivial poker to pass the time when bullets and bombs weren’t flying.

Frank jumped in on the action – and he would continue to be a recreational gambler for the rest of his life. Aboard the Herndon, there was a game running practically 24/7. Whenever young sailors had the time or the money, there was always a seat open at the poker table, and Frank even played on his lunch break!

For so many soldiers and sailors, poker was an escape. As James McManus notes in his book Cowboys Full: The Story of Poker, card-playing became a way to pass the time, but also a means to set fear aside and bond with fellow soldiers. In turn, the game of poker spread throughout the world. McManus notes: “As the American commander in chief [Franklin Roosevelt] relaxed playing for a couple dollars a pot, GIs were carrying poker to Europe, North Africa, China, the Pacific, and finally Japan.”

After the war, Frank settled back in Ohio. A few tattoos, reminders of his time in the Navy, adorned his arms and legs, including a star on his hand and an American flag on his upper leg. He became a forklift operator for Procter and Gamble, which is headquartered in Cincinnati. Soon he was set up on a blind date with Mary Jane Boyle. Unlike most blind dates, this one ended up working out. The couple eventually married and had five children: Pat, Kathy (Kevin’s mother), Mike, Gerry, and Frank Hoerst III (deceased). 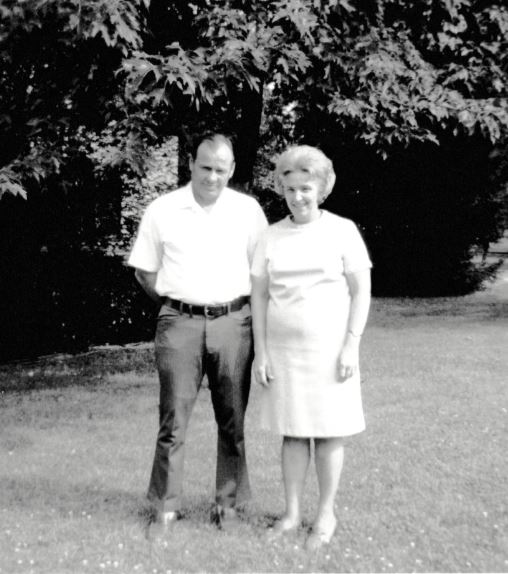 Family was key for Frank Jr., and that included poker with family and friends. And he had plenty of stories to entertain.

“He never took anything too seriously, and only played with what he could afford to lose,” Kevin says of his grandfather. “He would often tell crazy stories about guys he worked with in the Navy that would bet and lose their entire paycheck at these games.”

Family members remember Frank as always quick with a joke or story – especially at the card table. Over the past 10 years, Kevin’s favorite memories of him involved poker. The entire family lives near Cincinnati, and much of their get-togethers involved cards and chips.

“We would have family parties four or five times a year,” Kevin says. “One thing was for certain – at some point in the day, the guys that played cards would find themselves around a table with chips in play and cards flying. I looked forward to these times because we not only got to play cards, but we would hear stories from grandpa and my uncles about what it was like playing back in the day. It was such great bonding time that wouldn’t have happened if it weren’t for the fact that we were playing cards.” It was at one one of those family affairs that Kevin learned after attempting a check-raise that views on that move had been a bit different in Frank’s old-school games.

“He said that would have gotten a finger cut off or beaten up back in his day,” Kevin says. “I thought he was going to kick me out of the family. Never again.”

The Hoerst games had about five or six regulars – dealer’s choice. Frank’s favorite games were Five-Card Stud and Seven-Card No Peak. Two pictures of the same group of guys playing poker were featured on the photo board at Frank’s funeral, a lasting memory of his life in poker. 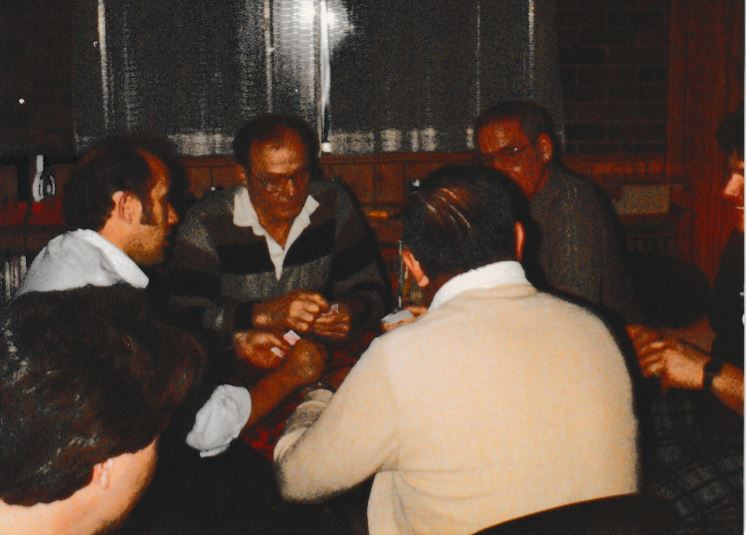 Ever the gambler, Frank also enjoyed video poker at his local casino. He also read the horse racing results in the paper every morning.

“He and my uncle would go through and see how much money they could have made because they would certainly have bet on the winning horse that had a familial name,” says his son Mike Hoerst. “A grandchild’s name, or an old pet’s name, or a street name that someone lived on, and so on.”

Frank was a frequent visitor to horse tracks, and in his younger days he would drive down to West Virginia to visit the dog tracks and wager a few dollars.

Kevin adds that his grandfather had some, ahem, interesting strategies in picking a winner at the track: “He said to always bet on the dog or horse that peed last before heading to the gates.”

A MAN TO REMEMBER

In 2011, Frank was preceded in death by his wife Mary Jane after 64 years of marriage. For the last few years of his life, he was nearly 100% homebound and enjoyed visits from his children and grandchildren. Even in his later years when he had lost much of the feeling in his hands, Frank still enjoyed some cards with family – always passing the deal to a grandson to shuffle and deal for him. Kevin and his grandfather Frank Jr. playing cards with the family in more recent times

Friends and family remember Frank as a man always ready to help or offer some friendly advice. One memory shared during his funeral sticks out. Kevin says a cousin had asked his opinion about a possible change in jobs. Frank encouraged her to quit, follow her heart, and do what makes her happy.

“That’s the kind of person he was – it didn’t matter what you did; just be kind, respectful of others, and do what makes you happy,” says his grandson Kevin, who lives in Cincinnati with his wife and four daughters and works as the development operations manager at a private high school. “Such great words to live by.”

Many Cardplayer Lifestyle readers can probably relate to Kevin’s stories about Frank – a kindly grandfather or father or uncle who taught them to play cards, but who was also a rock in their worlds. For the Hoerst family, Frank Jr.’s impact in life can’t be overstated.

“He didn’t have one mean bone in his body,” Kevin says. “He was a genuinely kind person.”

And a pretty fun guy at the poker table. Frank Jr. with his Navy medals 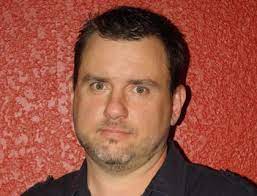 Sean Chaffin is a freelance writer in Crandall, Texas. He has written for numerous publications and is also writer/host of the True Gambling Stories podcast (@GamblingPod), available on iTunes, Stitcher, TuneIn Radio, PokerNews.com, HoldemRadio.com, and TrueGamblingStories.com. For more of his work visit SeanChaffin.com. Find him on Twitter @PokerTraditions. For story assignments, email him at [email protected]