A Chat with Jason Somerville about Chat Plays Poker

I’ve long been a fan of Team PokerStars Pro Jason Somerville. One of the most creative and innovative content creators in the entire poker industry, Somerville has been using his natural talent, entertaining and engaging personality, and incredible work ethic to attract legions of new people to the game for years. His primary vehicle of digital communication has been Twitch, where his venerated Run It Up brand has become synonymous with fun-loving, good-natured poker at its finest.

Recently, Somerville debuted a brand new initiative on the channel called Chat Plays Poker, which takes fan integration to a whole new level, essentially allowing people watching the Twitch stream to become full participants in the live poker game being played in the Run It Up Studio in Las Vegas.

Having watched the first ever session of Chat Plays Poker, I found it to be a very exciting experience, so much so that I felt the immediate urge to speak to Jason about it and learn more about how it came to fruition. With many thanks to Jason for his agreeing to this interview, I hope you all enjoy learning more about a really cool new poker innovation that I’m positive will only continue to grow in popularity.

I watched the first episode of Chat Plays Poker in real time and found it to be an incredibly entertaining, engaging experience as a poker fan. Putting together a show like that, innovating a new broadcast concept, doesn’t come together overnight though. When did you first come up with the idea for Chat Plays Poker and what type of work went on behind the scenes to get ready for your first production?

Glad you liked it! Our team has been working on Chat Plays Poker since the beginning of 2019, but we’ve had the idea in mind ever since seeing the success of other Chat Plays games on Twitch. PokerStars was also very interested on exploring the real-time interaction that Twitch offers, we have been working on other Twitch extensions with them, and this idea was the next big thing. The first step was to develop a mechanism for chat to vote and to iron out all the technical questions. Over the summer, we built our Run It Up Live home game set which allows us to run rake-free poker broadcasts whenever we like, all without any streaming regulations regarding broadcast delay. Once we had all those pieces in place, we ran a couple dozen tests, continually iterating on the concept, and finally we felt we were ready to launch Chat Plays Poker.

Can you describe the mechanics of how the voting works on the show?

Chat votes via a custom interactive Twitch technology called an “extension” which is controlled by the show host. The host decides what options to present to the audience given the scenario, runs the poll for about 20-30 seconds, then the results are displayed with the top voted action communicated by the host to the Chat player. We won’t give every option to the audience to keep the game moving – no vote on raising 72o UTG or whether or not to raise AA. 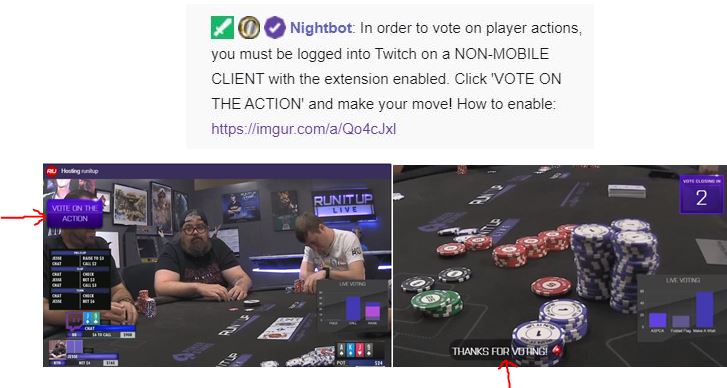 As opposed to other Twitch poker live streams with full tables or 6-max action, this one featured 4-handed play. How did you decide on that number?

We felt that 4-handed play was the proper amount to keep the game moving briskly. There’s just a bit too much folding at 6+ handed tables.

Who was the person actually sitting physically at the table to represent the Chat players? How did communication with this person work and what sort of technical apparatus were they wearing to facilitate it?

That’s longtime Run It Up fan Derek Gomez, who does an awesome job bringing the right amount of personality to a faceless avatar role. He has an earpiece to hear the host and a camera strapped to his body for us to get that first-person point of view camera shot. 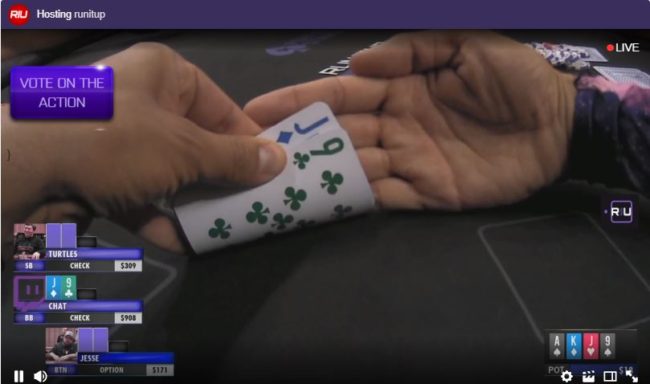 Derek joined our production team recently and happened to be our Chat avatar during our extensive testing. He quickly took to it, adding a level of humor to the role that we didn’t really consider at first. He’s done a great job so far and earned the role for our real shows.

The other players at the table were Jesse Fullen, Eric “Goldy” Goldstein, and Turtles (Ryan Parker). How did you decide on “casting” them in the show, and what sort of feedback did you get from them re: how it was to play Chat Plays Poker?

Jesse and Turtles work for RIU and Goldy is a longtime RIU fan. For Chat Plays Poker, we’re looking for players who will play a bit of a role, exaggerating their personality a bit to make for good characters. We’ll be bringing in a variety of character types and special guests in the future for Chat to play against! 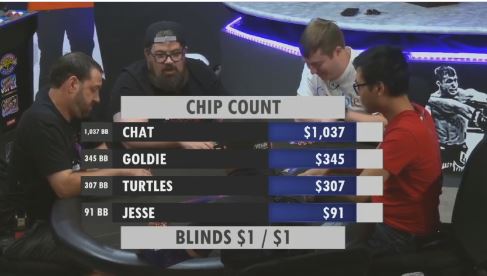 The show lasted for two hours, which is shorter than other broadcasts on the Run It Up Twitch channel. I imagine this has a bit to do with just testing out the idea for the first time. Will future Chat Plays Poker broadcasts be lengthier or did you feel that two hours is just the right amount of time for a show of this nature?

It’s unusual for Twitch shows to be only two hours long, but that’s what we’re sticking with for now. It’s an intense two hours from a hosting/production point of view and we want to keep the quality and energy at a high level.

Notably, the show featured a charity format, whereby all profits earned by all players would be donated to charity. Voters then got to decide which of three charities the monies were donated to. Will this continue to be the case in future Chat Plays Poker shows?

Poker is a great vehicle for charitable fundraising and it makes perfect sense for both Chat and our other players to be playing for charity. All donations made during the broadcast get added to Chat’s stack and will be given to charity, too. Which charity recipient depends on who wins the money! If Chat is profitable at the end of the next session, all winnings will go to Right To Play. 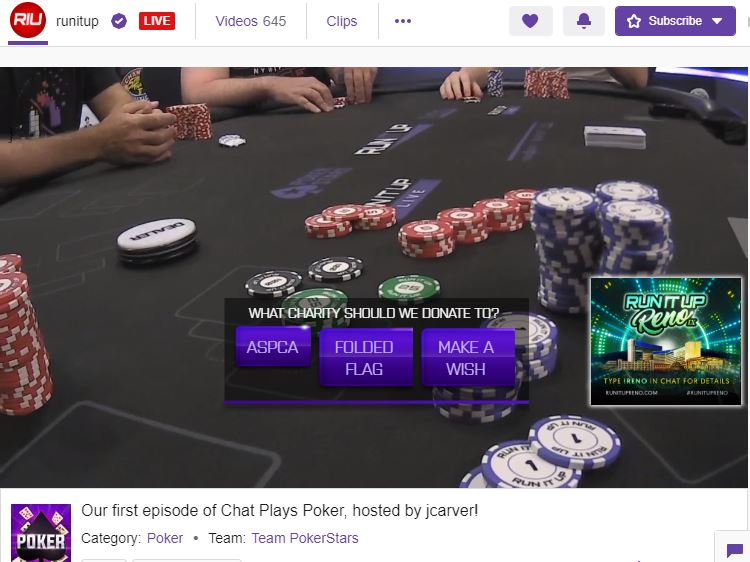 You hosted the show, providing commentary, engaging directly with the chat, explaining everything as you always do. In what way was the experience different for you than in other Twitch streams you’ve hosted?

It’s definitely a unique experience. I have to choose what options to give the audience on each decision, and last time we ran a bit under 100 polls through the entire 2 hour show. It’s a bit like being a game show host in terms of having to play tour guide and educator all while keeping the game moving.

From your dual perspective as both the host and driving force behind Run It Up, what was most enjoyable about the first Chat Plays Poker show? Is there anything you noticed that made you say “Ah, OK, we’re going to improve/add/fix this for next time”?

It’s great to see such overwhelmingly positive feedback from the fans both in-chat and on social media, especially after all the time we’ve put into development. PokerStars has also given great feedback on this, and we know a lot of their staff are fans of the feature too. We have a ton of ideas on how to improve and make it even better – each show we end up with a list of points to work on. There’s a lot we can do from both the entertainment and education angles.

Finally, I can’t help but think that seeing things from the player perspective reminded me a lot of when I tried PokerStars VR for the first time last year. Was there any overlap there as far as the idea brainstorming and execution?

I can totally see the similarities in the experience. I think Chat Plays Poker and PSVR appeal to a similar demographic of poker fan who don’t necessarily feel ready to play real money poker but enjoy playing the game, especially those who enjoy live poker. Both PSVR and Chat Plays Poker are great ways to expose the game to new players or those who might not have poker games available to them.

A 4-seat live cash game: @CMONEYMAKER, @Stapes and @jessefullen take up 3 seats, while Twitch viewers get the fourth. With help from @JasonSomerville.