I first started playing poker in 2003, shortly after my first trip to Las Vegas. The game seemed pretty boring. I remember my friend Greg was watching people play at the old Sahara casino and I thought, “wow, this is lame”. 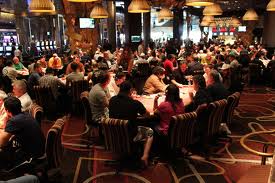 Within a month or so, Greg and I began playing games at my house for fun. That’s when I started becoming interested in playing in a casino. And once I did, I was over the home games and began playing exclusively in casinos and online. Why? I’ve assembled a list of 8 great reasons:

When I play poker, I am heartless. I’m after your money. Therefore, I prefer not playing against friends. I’d rather compete against my friends for beers, not money. But that’s just me.

2. No comps at home games

Living in Vegas, it really seems silly to play home games, although I know people that do. I live down the street from some of the best poker rooms in the world. Those poker rooms give me free stuff for playing there. I like free stuff. Unless your home game offers free buffets or booze, I’m probably not coming to play.

I’m not sure why, but I don’t trust some home games. Playing in a casino isn’t a risk because there are eyes in the sky. Cameras are all over. It’s nearly impossible to cheat. My friends and I had a home game tournament we affectionately referred to as the SSPP (Spacenuts Superstars Poker Party) and I never trusted my brother-in-law (now my former bro-in-law because my sis kicked him to the curb) Andy. Pretty sure he was cheating. And he ate all my food.

Have you ever been to a home game that had comfortable chairs? Didn’t think so. Most home game hosts will throw together any combination of chairs they can find. It’s not like that in a decent casino poker room.

I’m sure some home game hosts will put a ball game on TV. But most casino poker rooms have 4–5 TVs with games on. I like watching sports while I play poker. Most poker players are incredibly annoying, so sports is a great way to drown out their dumb comments.

Of course, this depends on where you play. Being that I play at the top poker rooms in Vegas, I get to play with some celebs and I think that’s pretty cool. Jose Canseco frequently plays at Aria, for example. But I’m guessing if you live in, say, Durant, Oklahoma (yes, I’ve played there before!), this one doesn’t apply to you.

I’m not sure if I’ve ever played at a table where there weren’t at least 2–3 people I thought were just plain weird, dumb, or both. I sort of enjoy the mix of people in poker rooms at casinos, especially here in Vegas.

So get out of the house and go play poker at your local casino. Comps, ball games, and bad beat jackpots. You can’t beat it!