As life across the US returns to normalcy, I really don’t even want to look back at the reality of the past 15 months. The COVID-19 era is something we’ll hopefully never have to live through again.

The pandemic was tough, on everyone. I have a core group of friends in San Diego that I didn’t see in person for more than a year. Same for my brother, who lives within three miles of me.

Netflix and Hulu became the go-to way to pass the hours after work, hoping that each setting sun got us one day closer to the end of the lockdown era. I hit the end of the road on those mediums around February; I would search and search for something new to watch, but just couldn’t get into anything.

One February night I started watching a few poker vlogs, just to see what some of poker’s best content creators were up to during the pandemic. I watched the latest episode of Johnnie “Vibes” Moreno’s vlog, then randomly picked another random episode from 2018.

From there, I decided I’d watch Johnnie’s entire series, in chronological order. My only complaint is that there were only 91 episodes, and I was bummed when I reached the end.

There are now Episodes 92 and 93, which I’ll likely go through in the very near future. Here are a few things I learned from binge watching the first 91 installments of the Johnnie Vibes vlog. 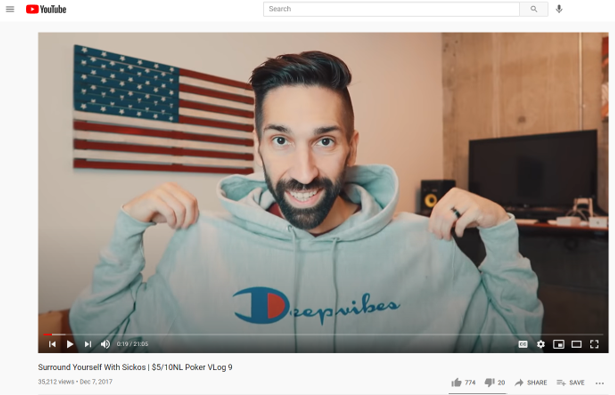 Surrounding Yourself With Sickos

Motivational speaker Jim Rohn says “You are the average of the five people you spend the most time with.” Johnnie Vibes puts his own spin on that saying, advising aspiring poker players to “Surround yourself with sickos.”

That mantra, from Episode 9, can apply to any venture, as well as life itself. If you’re trying to improve at live poker, you can add one sicko to your poker group by simply watching Johnnie’s vlog and really paying attention to his thought process through each hand.

Johnnie tells us that one of his top priorities on his journey through the live cash games stakes involved consistently surrounding himself with players who were better than him.

“The majority of my friends are much better players than me,” Moreno says in the episode. “Just by being around them, I have elevated my game way beyond what would have been possible if I would have just tried to do it on my own.”

Surrounding yourself with sickos makes for a winning approach to any walk of life. If you want to get better at something, get yourself out there and find people who are at the level you want to reach.

Episodes 50-54 see Johnnie spin off into a miniseries called Embrace The Grind. He estimates that he’d put in around 11,000 hours of live poker over the past 12 years, with more than $1 million in profit.

Those figures put Johnnie at around $90 per hour for his career, but the San Diego (and now Las Vegas) poker pro warns that the path to $1 million playing poker is often not glamorous.

The Embrace the Grind miniseries sees Johnnie embark on a goal to play 30 straight days of live poker at $5 big blind stakes.

Moreno’s regular $5/$10 game in San Diego stopped running shortly before the Embrace the Grind series, and his goal was to show viewers that it’s possible to grind out a good living at $2/$5 and $5/$5 live cash games. Moreno ends up posting $8,023 in profit, playing just short of 152 hours over the 30 days.

That win translates to a $52.58 per hour win rate over the series, a benchmark I’d be more than happy with if it was me!

Moreno has spun off Embrace the Grind into its own series, with its own YouTube channel. The latest episode features an in-depth interview with Joey Ingram, and Moreno dropped a teaser for the episode in a recent Twitter post:

Thank you @Joeingram1 for your time and candid commentary in the latest episode of "Embrace the Grind." Joey's emotions are invested in the poker community. He truly cares. This interview is a glimpse in to that passion and energy. pic.twitter.com/wHI4GQWgLy

The Ups of Life as a Poker Pro…

Moreno started the vlog in October 2017, and since then his combination of poker, vlogging, and recreation has taken him all around the US. He even takes a trip to Macau in Episodes 22 and 23 of the vlog, and his perspective on that experience isn’t quite like any other I’ve seen about the Macau live poker scene.

One of my favorite episodes of the vlog sees Johnnie travel to an underground poker game in Mexico City. Poker isn’t the only item on the itinerary for Moreno during Episode 20, which also includes a voyage to EDC Mexico and an experimental trip to a traditional temazcal steam bath.

“I may or may not have feared for my life within the first five minutes of them closing the door, and closing the lid on this little crock pot we were in,” Moreno tells us in the episode.

Johnnie survives the temazcal session and goes on to document what sounds like as wild of a game as you could image in Mexico City. At around the seven-minute mark of the episode, Moreno shows us a vision board that he created with his wife, Olga, three years prior.

The vision board displays Moreno’s immediate life goals, which were at the time plans for the future. Three years after its creation, he’s knocked those goals out of the park.

As much as I found myself rooting for Johnnie throughout, the vlog isn’t just 90-plus episodes of Moreno crushing at the poker table.

Some of the most memorable moments from the series revolve around losses, and Moreno’s authenticity really comes out in those episodes. One of the first vlog episodes that I watched, almost two years ago (before this more recent binge), featured Moreno coming out of a session at Barona Casino, during the Embrace the Grind challenge.

Moreno loses $4,156 in the session, as tough of a night as it gets playing in a $2/$5 NLHE game. He turns the camera on himself as he’s leaving the casino, wanting to give us a look at the fresh emotion immediately following a disastrous session. 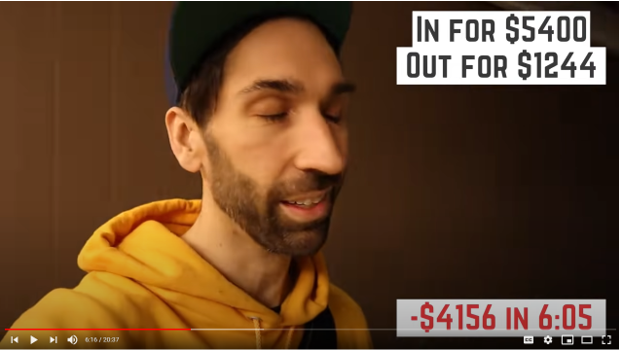 He tells us he’ll record a summary of the session the following day. The vlog then cuts to Johnnie in the parking complex of his condo an hour later, where he chooses to reveal an extended look at the reality of losing in poker.

“I just want you guys to see the realness, and to see what playing poker for a living really is,” Moreno says. “And it’s pain. It’s thinking that you’re invincible.”

The scene makes you a little sick to your stomach, which is almost certainly what Moreno himself is feeling at that time. You can find that downswing summary in Episode 2 of the Embrace the Grind miniseries.

You won’t find one of Johnnie Vibes’ greatest poker and life accomplishments documented in the vlog.

Veronica Brill started a fundraiser last month that aimed to raise money for K.L. Cleeton. Cleeton, a quadriplegic poker player, wants to travel from Illinois to Las Vegas for the 2021 World Series of Poker this fall.

Cleeton’s physical condition restricts him from traveling in a standard-issue automobile, or from flying. Brill stepped in to start a GoFundMe campaign in an effort to buy a customized vehicle that will allow Cleeton to travel to the WSOP.

Moreno then took to Twitter to determine his own contribution to the fundraiser:

Donating $5 per retweet. Lets send KL to the moon in his new van 🚀 https://t.co/yzZOF4N29l

With 18 hours, Moreno’s pledge resulted in more than 1,800 retweets. He rounded his donation up to $10,000, which still stands as the top donation to the GoFundMe drive.

The GoFundMe campaign cleared the $50,000 mark, and Bill Perkins matched that amount to put the total funds raised over the $100,000 mark.

Glad I could make a difference for you @highhands89 pic.twitter.com/5H1JyJ5z8m

The $5 retweet pledge was a gamble on Moreno’s part, which turned into a win for everyone involved. Cleeton says he’ll put Johnnie’s face on the van, an added bonus for anyone who’s around Las Vegas for the series.

I’m looking forward to more from Moreno’s vlog, and now it’s time to dive into the Embrace the Grind spinoff series. Johnnie’s vlog really helped in those final weeks of lockdown life, and I’ll be rooting for him in whatever he does in the future.