The term “pot committed” is one that’s thrown around a lot in poker. The notion is that once you put enough of your stack into the pot, you cannot justifiably fold to any additional bets. For example, if the pot is $600 and you only have $100 left, you can’t fold when your opponent jams for your remaining stack. Some say this is a foolproof way to approach the game. Others think there is no such thing as being pot committed. Those who ignore being pot committed understand when they are beat, and no amount of money is worth trying to win a pot you can’t. 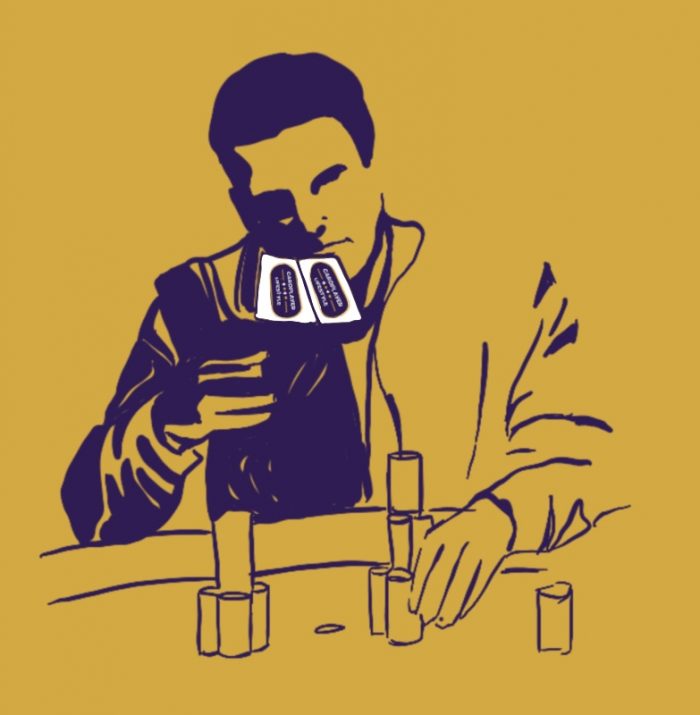 So what is being pot committed?

Being pot committed may sound like a cousin of poker pot odds, but it is slightly different. Some geniuses out there decided that once you have put enough of your stack into the pot, it is negative expected value to fold to any more bets. They are saying that, even if you have two outs, when the pot is big enough you have to call off. Even if you know your opponent has AA, you have to call off with KK once you put 90% of your stack in play.

But what ever happened to playing the person instead of the cards? What happened to the Wild West, where you just looked someone in the eye and knew they had it? Some players just understand. They can make that fold despite getting phenomenal odds. They have what it takes to make the tough laydown and save another bet. These are true, gut-feeling type players who rely on their cunning instincts rather than math.

Math has found a way to infiltrate poker. Poker, which is a game based on raw talent and the ability to read people, is becoming a glorified math problem. Math already stole the alphabet with algebra, now we’re going to let it take poker too?! If you ask me, math belongs in classrooms, not card rooms!

In a poker world dominated by calculators and accountants, let’s take a look at five reasons why poker players ought to muster up the gall to make the tough fold even when “pot committed.”

1. Your Opponent Has to Have It

Do you ever find yourself up against that one opponent who always seems to have it? For whatever reason, they always seem to be getting their money in good. Whether it’s AA all-in preflop or hitting that perfect turn to complete their draw, they only ever get the money in when they have a heat-seeking missile of a hand. Players can accurately make folds even when pot committed against these types of players.

Let’s say you end up in a three-way pot playing $1/$2 NLH and with $200 effective stack sizes. You open QQ from early position to $8, two players limp, and the aforementioned opponent 3-bets to $50, then the Big Blind goes all-in for $165. You flat call knowing the 3-bettor is full of it and he will likely fold, but all of a sudden the 3-bettor goes all in, too. It’s back to you and you need to call $35 into a pot of $546. Most players would say you are pot committed at this point. However, he has to have it right? Is he doing this with JJ or AK? Even if it’s AK it is still only a flip. Do you need to waste $35 with only a 19% chance of hitting your Q by the river? The calculator players might tell you to make the call or to go all-in instead of flat calling, but some players have what it takes to make this fold.

I mean, $35 is 6% of the size of the pot when you call and you have a 19% chance of beating AA or KK in this spot. It seems like such an enticing price given your equity, but would you put even $1 more in knowing you are up against AA or KK here? Not everyone would; some folks out there will trust their gut and make the tough fold.

2. Your Opponent is Too Lucky

We can all agree that poker is a skill game. I mean, it has been proven time after time that the better players are going to win over the long run. This knowledge doesn’t help much when you are looking at one particular session against one insane luck ball. Some players out there just have a night, week, or even year where they can’t lose. When certain players find themselves against someone who has been sitting on a horseshoe all night, they make spectacular folds that go against pot committed poker.

As the old saying goes, “I’d rather be lucky than good.” Some players are just lucky, and good players can sniff out a luck box and make tough folds against them. So what if you have two overs and the nut flush draw getting 8 to 1 on a call? When up against the luck box from Hell, players can make this fold comfortably.

3. You Have the Wrong Suit

Much like our previous reason, luck has a lot to do with certain draws. We all know the equity you have when you have a flush draw. Flopping a flush draw gives you a 36% chance of hitting it by the river, 18% for the turn, and 18% for the river. But do these percentages matter when it is a draw with your unlucky suit?

Let’s say you flop the nut flush draw in a 3-bet pot. After a bet, raise and a call go in on the flop, you brick out on the turn card. Your opponent goes all-in for $100 into a $500 pot and you’re sitting there with A high. You have a flush draw, sure; most players will make this call because they are pot committed. However, you have a club flush draw and the puppy paws have not been coming for you. Players who use their gut can make this fold from time to time. If the hearts have been flying your way like it’s Valentine’s Day, but a bodybuilder bouncer is blocking you from the clubs, does being pot committed even matter?

Maybe it has something to do with the amount of ink on the cards, but I have a feeling everyone has their good and bad suits. It is subject to change, but if a player knows which suits will hit for them and which won’t, they may be persuaded to make a fold that goes against pot committed poker.

At the end of a session, some players may take the conservative route to lock up their win. If you’ve ever been on a downswing you know how important it is to lock up a win. Downswings can be so demoralizing, just kicking you in the gut over and over. It may feel like there is no light at the end of the tunnel. That is until you can lock up a win. Once a win is in the books, you can start to see that light.

Some players will find themselves at the tail end of a session with a little profit in their stack. It feels great knowing you are about to rack up and hit the cage a winner for the first time in a while. Many times people find themselves with a reasonable win at the end of a session and they get involved in a big pot. When players are in the depths of a downswing, they can make folds even though they are pot committed. Why go for a bigger win to make up for that downswing by calling when pot committed? These players can easily (and more happily) lock up a 20 BB win rather than risk a small loss to have a 200 BB win.

Sometimes it’s just not your day. Poker can be a brutal game. Coolers, bad beats, variance, being card dead; all of these things can eat away at your soul and make you want to leave the game forever. Plenty of “math players” will tell you it is all part of variance and to pay attention to making plays that will pay off in the long run. But does that matter when you are having a session where you just can’t win a hand?

When players are faced with a session that cannot go their way no matter what, some of them will fold even when getting insanely good odds. They can be so pot committed that they are getting better than 20 to 1, but if they know it is not their day, they will make the fold. Some may call this a loser’s mentality, or so far from GTO that the person can’t be a winning player, but some players out there can find the fold button even when it seems to be invisible given the pot odds.

We’ve examined several reasons why people fold when they are pot committed. It can be because of superstitious reasons, the type of player they are up against, mental blocks to gambling when they have a win locked up, and a variety of other reasons. In all seriousness though, all of these have something in common: they go against a winning poker strategy.

Of course the luck factor can feel strong during a downswing or just a particularly bad session. But folding when you are pot committed is ALWAYS the wrong move. No matter what.

If you find yourself making decisions based on superstition or going against the statistics because you want to play things conservatively, it is time to reevaluate the games you are playing and your overall poker strategy. You aren’t going to win every time you make a 20 to 1 call with 10% equity, but in the long run, it is always worth it. Don’t make ridiculous folds because clubs are unlucky or it’s “not your night.” Make good plays for the long run and don’t write off the math.