3 Ways in Which Poker and Blackjack Are Similar

As much as diehard poker players might not want to admit it, there are several similarities between poker and blackjack. Beyond the fact that both use cards and chips, there are intricacies that can be found in both games and, in certain circumstances, skills that can be employed in both endeavors. Here’s a look at three ways in which poker and blackjack – whether in a live setting or on the virtual felt – are similar.

For newcomers to the games, both poker and blackjack have a tool that can be used. These are “cheat sheets” that you usually can find in the gift shops of casinos. These cards can be very useful for players who might be a bit intimidated by stepping up to play in a live setting.

These cards aren’t left for just playing live, however. You can get some excellent online blackjack tips from these cards – which will tell you when to split, when to double down, and when to hit or stay – and use them to maximize your edge in the game. Even though it may be an ABC approach to the game, the charts used for online (and live) poker can also provide you with some interesting insights, such as your odds for your baby pair to beat A-K (you’re a slight favorite pre-flop 54% to 46%) or your chances of improving from a flopped set to a boat on the turn or river (36% on the turn, 22% on the river). 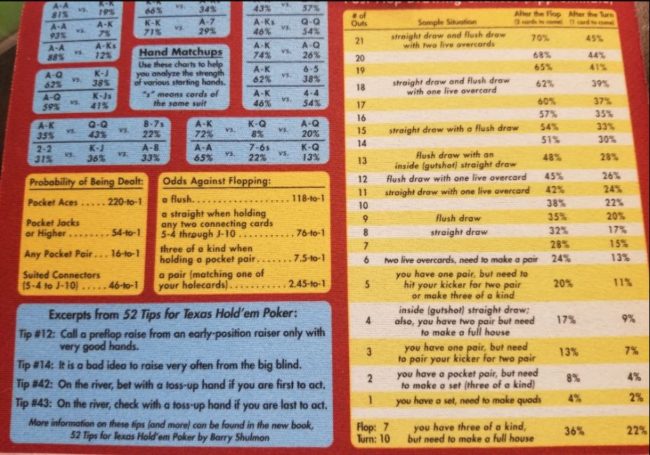 It will obviously mark you as a newbie should you use these tools in a live setting, but if you’re sitting at home, who’s going to know what you’re doing?

In both poker and blackjack, it is important to maximize the value of your bets. Bet too little and it either won’t be effective or you’re not getting the full value of your efforts. Bet too much and you either start drawing attention (blackjack) or not getting the action you want (poker). Thus, it is important to be able to put out just the right number of chips for the situation presented.

In online blackjack, there are strategic situations in which it is opportune to put out a larger bet than you might have previously. When the last 10 cards out of the shoe have all been lower than a six, for example, there is a predominance of face cards in the deck, which makes for a subtle shift in the player’s favor. At that time, it would be appropriate to possibly double the bet (but no more, lest you draw too much attention) and try to strike while the deck is in your favor.

Online poker also has its bet sizing situations. If you’re in a hand and have a raise and a call in front of you and you stare down at pocket Aces, a three-bet is usually the correct play. You would put out a three-bet that considers not only the raise but also the call, and anyone else left to act behind you. If you were just to put your bet out according to the raise, then you would miss some value from having the chips from the caller in the center.

Dear Poker World: I know you’re proud that your home game “plays big.” But sitting in a basement with people who don’t understand bet sizing shouldn’t be a point of pride. xoxoxo, Mac

WHAT’S LEFT IN THE DECK?

You will normally have better success in online poker and online blackjack when you have an idea of what cards are still left in the deck. For poker, knowing your “outs” – the cards that will improve your hand – is key to being able to make critical decisions as to your actions on the felt. If you’re playing Seven Card Stud (or a variant) especially, you will be able to garner a great deal of information from the “up” cards that you see, enough information that you may want to get out of a hand before it even ramps up.

The same card knowledge can come into play in blackjack. As indicated previously, it is important to have an idea of what has been coming out of the shoe to be able to identify when the deck is in your favor – it has more paint cards than lower denomination cards. When that moment comes, then you can get more aggressive with your betting action and statistically be earning more money on hands than if you were just playing for “funsies.”

There are many blackjack skills that are also relevant to poker, and vice versa. So, too, things that work for online poker players are also excellent suggestions for optimal online blackjack tips. So the next time that someone says they are “gambling” when playing blackjack or poker, you can tell them that the two games are quite similar and more strategic than they might think.