If there was any lingering doubt about the comeback of shows and conventions in Las Vegas, the third weekend in June at the South Point Hotel and Casino should put that to rest for good. Thousands of people came to South Point over the past few days, and every corner of the property was taken up by someone with a cowboy hat, bowling shoes, or casino chips… and sometimes they had all three!

The Casino Chips and Collectibles Show shared a wild weekend at South Point with a massive bowling tournament and the Pacific Coast Cutting Horse Derby, and it was exactly the kind of action that Las Vegas needed to come back into style.

Today at @southpointlv you can see the World’s Greatest cutting horses, bowl in the US Open Championships, or check out the largest collection of casino chips on the planet.

This place has everything. pic.twitter.com/rZpRYOzsCB

Throughout the entire weekend in Exhibition Hall C, the convention floor saw a steady stream of dealers and collectors, and the casino collectibles show took on the feeling of a reunion as friends saw each other for the first time since 2019. Poker industry legends Linda Johnson and Jan Fisher were on hand to talk with guests about their long and illustrious careers on Friday, and Mark Hall Patton from Pawn Stars and the Clark County Museum stopped by on Saturday. The yearly event returned to top form after missing 2020 to COVID, and the 28th annual show was well attended by collectors and lots of curious visitors. 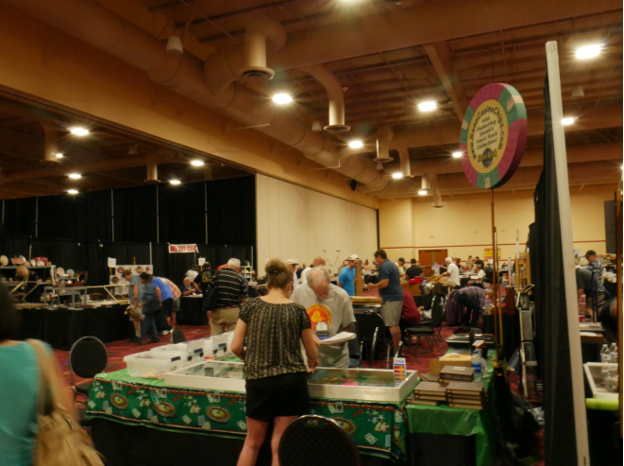 Johnson and Fisher were in attendance to greet attendees and take in the show on the show’s first day. They both had the opportunity to spend time on the floor of the convention before participating in the club’s annual poker tournament in the South Point Poker Room that evening.

Johnson, a Poker Hall of Famer, is a WSOP gold bracelet winner who has been around casinos for her entire career. She has picked up many unique items along the way, but even as a veteran of the casino industry she had to marvel at the collection.

“I have some really old Dunes chips, and I really like the Las Vegas Club chips with the baseball players,” Johnson said during a break in the poker tournament. “I’ve been collecting chips for 40+ years and the collection that they have here is amazing. I really enjoyed walking around and looking at the displays.”

Fisher, a 2009 inductee into the Women in Poker Hall of Fame, has an understandably different approach to the hobby:

“It’s been great to see so many avid collectors come out and do what they love. We love to play and being back at the table is a lot of fun. I’ve been collecting chips ever since I’ve been playing poker, but I cash them out before I leave.”

Both Johnson and Fisher played in the Friday evening poker tournament, which is held annually for members of the club. They offered copies of their book Winning Women of Poker as bounties, and took time on break to take more pictures with members of the club who were competing. The tournament was a hit, and the results were not very surprising. Johnson held on to her bounty and won the tournament, and the “First Lady of Poker” donated her winnings right back to the Casino Chip and Gaming Token Collectors Club. 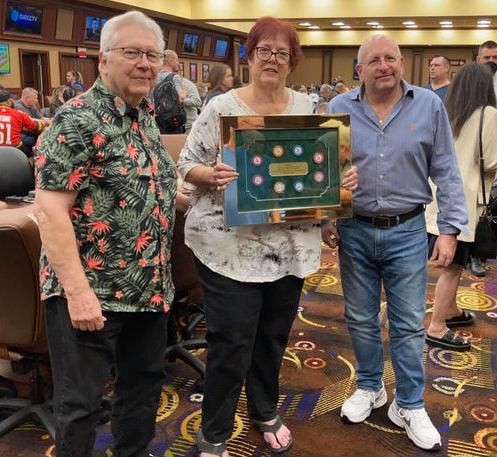 The 2021 show was put on by the CC&GTCC, a.k.a., the Casino Collectors Club, a not-for-profit group that has been gathering in Las Vegas once a year to buy, sell, and trade casino collectibles since 1993. Early versions of the annual event were a unique opportunity for club members to buy, sell, and trade with one another in the pre-Internet era, and a wonderful excuse for its members to visit Las Vegas once a year. The first show in ‘93 was at the Aladdin Casino on the Strip, and it has made a few different stops in the last few decades at places like the Riviera and Tropicana, before spending the last several years at South Point.

Sharing some of the more unique items I found at the Casino Chip and Collectibles Convention:

From a poker set commissioned for President Eisenhower to use on AF1. Hard to nail down the value, but someone was trying to sell an entire set of 500 in 2007 for 100k. White chip-1/200 pic.twitter.com/q0PYpwj9ZX

The hobby has grown with the internet and adjusted to it, but it’s still very much an in-person experience and many members prefer to do a lot of their collecting without relying on the web. Collectors usually start with a small collection and grow very quickly from there. It’s very common for members to pick up lots of extras on a casino vacation for their friends.

Harrah’s Lake Tahoe currently sits on the original site of the Stateline Country Club, a casino that operated as Sahati’s from 1945-1958ish. If you’re a fan of Man with the Golden Gun, you’ll be excited to know that they offered the 3-dice game called “chuck-a-luck.” pic.twitter.com/sOf3wDyZtY

Casino collectibles have had a small following throughout gaming history, but casino artifacts were considered more of an oddity by most serious collectors until the early 1980s. Coin dealers dealt in a few rare casino chips, but collections were mostly personal items that someone may have kept from a trip to Las Vegas or another casino from around the world. That started to change in the 1980s as the CC&GTCC formed around a group of collectors that subscribed to newsletters written by one of the hobby’s dealers, Archie Black. The newsletter and the club allowed collectors to come together and grow the hobby, and today the quarterly “Casino Collectibles News” boasts a circulation of over 2,000.

A sealed set of commemorative $2.50 cheques from the 1994 WSOP. Each would’ve had a member from the Gallery of Champions. You can see some of the single chips on display at @Spinettis if memory serves me right. The owner got these in 1994 from the souvenir table at Binion’s. pic.twitter.com/zAIq4TCGDL

The growth of the hobby means that just about anything with a casino logo on it is sought after by a nostalgic collector today. Everything from player’s loyalty cards to napkins is collectible, and a good story will always add more value to an interesting item.

This ivory gambling chip dates back to the mid 1800s, and it matched the 2 1/2 dollar gold piece that was used at the time. Because it’s ivory they are very illegal to sell in some states, especially California. pic.twitter.com/ogzl1yfNPe

The market for casino collectibles is still somewhat new, and most of it remains under the care of the collectors themselves. It’s a small, tight knit industry, and there are constant efforts to keep the costs reasonable. With the exception of very rare and popular items, prices can be relatively safe from the bubbling intensity that has fueled the rising costs of collecting sports cards and memorabilia. It’s an old school pastime, with a focus on companionship over money and a commitment to share and grow the thing that they love.

There are no concrete dates for the 2022 Casino Chips and Collectibles Show, but everyone expects it to be back and continue to grow into the future. In the meantime, you can explore their growing database of casino chips from all over the United States and parts of the world. “The Chip Guide” has over 269,000 items to explore, and its searchable by state on the front page. If you’re interested in learning more or joining the CC&GTCC, visit their website.