Just when you thought the poker world had seen everything, here comes a headline that is sure to make you go: “WHAT?!” Just last week, a $400 buy-in tournament was held at the World Poker Finals at Foxwoods that attracted almost 1,000 players. As is typical in many tournaments, as the field dwindles, blinds escalate, and payouts rise, prompting the remaining players to consider a chop so as to maximize cashout potential rather than risk bad luck and earn less money. 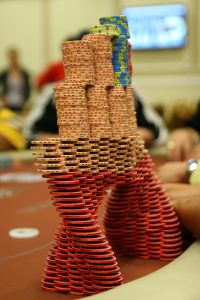 Apparently, according to reports, blinds had gotten so high with a couple dozen players remaining that even the chipleaders had only approximately 30-40 blinds among them. As most casinos, Foxwoods included, have a policy of staying out of chop negotiations, the fact alone that 23 poker players managed to agree is incredible.