From 6,598 players down to just nine, the World Series of Poker Main Event has finally come to a halt, until October. Each of the nine final tablists is guaranteed to make almost $755,000 with all having an eye on the top prize of over $8.5 million. Truth be told, there are no household names among the final nine, but we’re sure ESPN will rectify that situation over the coming weeks during their broadcasts.

Listen to our interview with 23rd place finisher Yuval Bronshtein, where he predicts who will win!

Here’s a rundown of the remaining players and their chip counts:

Get Used to Seeing These Guys on TV 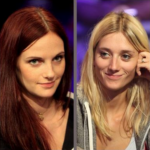 With 27 players remaining to start of Day 7, one of the main storylines was the presence of two women in the field, Norway’s Elisabeth Hille and France’s Gaelle Baumann. They represented the final two of 211 women who had entered the Main Event. Despite the recent bracelet wins of women like Allyn Jaffrey Shulman and Vanessa Selbst, no woman had made the Main Event final table since Barbara Enright back in 1995, when she finished in fifth place. Each year of televised coverage over the past decade has had at least some focus on who would be the “last woman standing”. Some women who come to mind in that regard are Maria Ho and Tiffany Michelle, who made deep runs in recent years. Either Hille or Baumann would be the guaranteed headliner if they had managed to make the final table but the fairytale was not to be, as they busted in 11th and 10th place, respectively. 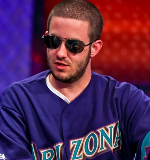 Of the remaining players, the best known is arguably Greg Merson, who won his first bracelet earlier this year in the $10,000 Six-Handed No Limit Hold’em event. His $1.1 million cash in that event, as well as having made the money in two other events during the World Series helped Merson accrue 481 points in the Player of the Year race. Even if he finishes ninth come October, he’ll overtake Phil Ivey at the top of the leaderboard.

The lone non-American left is Andras Koroknai, a 30-year old Hungarian poker pro who won the L.A. Poker Classic in 2010. Aside from him and Merson there are four other professional poker players at the final table: the chip leader (Sylvia) and the short stack (Ausmus), Robert Salaburu and Steven Gee, a 2010 WSOP bracelet winner. Gee is the oldest player left at age 56, while Jake Balsiger is the youngest, at 21. Aside from Balsiger, there are two other amateurs at the final table, in Russell Thomas and Michael Esposito.