The 4-day long Event #29 made history right from the get-go as it began with the largest single-day starting field in the history of the World Series of Poker. An astounding 4,128 players registered for the $1,000 buy-in Seniors No-Limit Hold’em Championship event, limited to those 50 years old or more, definitively proving that poker is not only a game for today’s younger set.

By the end of Day 1, the field had been whittled down to 462 players, 423 of whom would eventually finish in the money. Notable names that competed included fan favorites like Eli Elezra and Hollywood actor James Woods, but they hit the rail with nothing to show for their efforts. Among those who did cash were the “Flying Dutchman” Marcel Luske, “the Shark” Humberto Brenes, and Hal Lubarsky (who is legally blind)! 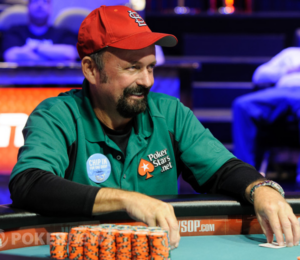 When the field narrowed further, the final table was clearly left with some pretty serious star power in Hoyt Corkins, Dennis Phillips, and Allyn Jaffrey Shulman. Shulman was (by far) the last women standing in this tournament and comes from a pretty famous poker family (her family owns CardPlayer Magazine, her son Jeff is a former November Niner, and her husband Barry is a two-time WSOP bracelet winner). Hoyt Corkins, a professional poker player and two-time bracelet winner, had cashed over two dozen times at the World Series before this event. Dennis Phillips was probably the best known player to have made the final table. Famous for carrying the chip lead into the first ever November Nine at the World Series of Poker Main Event in 2008, Phillips finished third there and subsequently became the “everyman’s ambassador” for the game.

Corkins, Phillips, and Shulman comprised 3 of the final 4 players in the event. After Corkins was eliminated in fourth place and Bob Phelps in third, a heads-up battle ensued between Phillips and Shulman with Shulman holding a commanding 3.5:1 chip lead. Phillips played gamely for over an hour, at one point having Shulman down to her last card, but she was able to river a runner-runner inside straight to stay alive. Eventually she went on to defeat Phillips, who received almost $375,000 for his efforts. 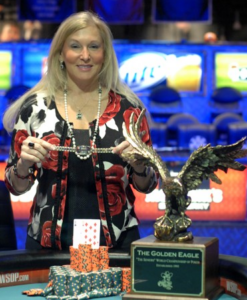 For her part, Shulman took home the bracelet, over $600,000, and further added to the Shulman family poker legend. Amazingly, her accomplishment comes in the same week that her husband and son also each made final tables at the World Series. Finally, Shulman is the first woman to win an open WSOP event since Vanessa Selbst in 2008.