The bracelet is what it’s all about

Sixty events have come and gone at this year’s World Series of Poker, which means it’s time for the Main Event. The largest poker tournament of the year had a total of 6,598 registered entrants over three starting days of action, with Day 1a featuring 1,066, Day 1b 2,114, and Day 1c 3,418 entrants, respectively. This makes for a prize pool of over $62 million, with a purse of just over $8.5 million for first place. This year’s WSOP Main Event has the distinction of being the fifth-largest poker tournament in history; 666 players will cash for at least $19,227 apiece. Any player fortunate enough to make it to the final table will see a payday of at least $754,798.

As happens each year, lots of poker pros hit the rail, not managing to make it out of Day 1. This year’s list of busted players includes plenty of household names, including some former World Champions. Here’s a partial list of “known” players we won’t be seeing advance to Day 2: 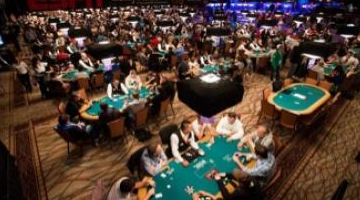 Just a sliver of the 6,598 players in the field

Loads of dangerous pros and former World Champions are still in the hunt, with some having fared more successful than others over the three starting days. Former World Champions still looking to add another bracelet to their collection include Johnny Chan, Doyle Brunson, Joe Cada, Jamie Gold, Tom McEvoy, and defending champion Pius Heinz.

Other pros who’ve won bracelets this year have continued their good runs with strong Day 1s, including Vanessa Selbst, Michael the Grinder Mizrachi, and the $18 million man Antonio Esfandiari. Fan favorites like Daniel Negreanu, Phil Ivey and Jason Mercier are also still alive, but of the three, only Negreanu has a relatively big stack, while the others are treading water.

What to Expect Now?

Today, the players remaining from Days 1a and 1b will resume playing, in separate rooms, while Day 1c players will return tomorrow. The entire field will be combined for the first time on Thursday, Day 3. Stay tuned for more 2012 World Series of Poker Main Event updates here at Cardplayer Lifestyle.