And then there were three!

After months of waiting, practice, and planning their final table strategies, the November Nine finally reconvened yesterday to wind up the 2011 World Series of Poker. Play began shortly after noon local time and was slated to continue for as long as it would take until only three players remained. It took 6 full hours until the first bustout occurred, but the field was whittled down to just 3 poker players within the following 5 hours or so. After Day 9 concluded, only one thing’s certain: this year’s World Series of Poker Main Event Champion will either be Martin Staszko, Ben Lamb, or Pius Heinz. 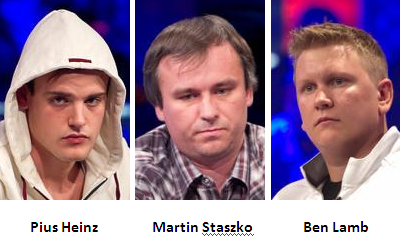 Very interestingly, all eliminations were made by the three players still in contention for the title. Also of note, Martin Staszko began the day as the chip leader with just over 40 million in chips. After all the drama of Day 9, he’s indeed still in the hunt, but still hovering around the same chip count with 42.7 million.

Ben Lamb, the World Series of Poker Player of the Year (and incidentally this poker blogger’s pick to win it all), sits in second place with 55.4 million in chips. The overwhelming chip leader with 107.8 million is Pius Heinz, who, as mentioned in the previous blog post, just signed an endorsement deal with PokerStars. Since the beginning of the poker boom in 2003, most of the Main Event winners have been signed with PokerStars; think Chris Moneymaker, Greg Raymer, Joe Hachem, Joe Cada and Jonathan Duhamel. Is Heinz next in that line of champions?

Three-handed play gets underway tomorrow at 8:30 pm Eastern. Be sure to check back with us at the Cardplayer Lifestyle poker blog to find out the winner!