The World Series of Poker Europe (WSOPE) kicked off two days ago with Event #1, the €2,680 buy-in Six-handed No Limit Hold’em event. A total of 360 players entered, meaning only a select 36 would make the money. Through 18 levels and 2 days of play, the field has been whittled down to just 2 tables of 12 elite players. And, just like 3 other separate times at the WSOP over this past summer, Phil Hellmuth is once again in contention to win. 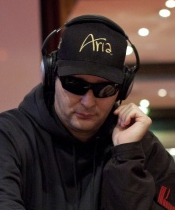 Hellmuth currently holds 401,000 in chips, second only to Swiss player Guillaume Humbert’s 541k stack. With three 2011 WSOP runner-up finishes to his credit, Hellmuth is hungrier than ever for his 12th bracelet. As evidenced by his Twitter feed, he’s brimming with confidence and prepared to add a new title to his all-time leading collection. For the record, should he win the event, this would also count as Hellmuth’s first WSOPE bracelet.

Also still in the hunt is David Benyamine, who, sitting in 4th place with 253,000 in chips, is looking to win his 2nd career bracelet. For Benyamine, winning a bracelet in France would take on extra special meaning, as he has “home table advantage”.

In addition to the hardware, the winner of WSOPE Event #1 will also take home about €217,000. The good people at the World Series will be streaming live coverage of the proceedings for all you poker fans out there who want to watch the poker action as it unfolds, STARTING TODAY at 9 am EST (3pm local).

Lastly, for those of you following the WSOP Player of the Year race, Hellmuth could take the lead with a win in this event, which would force Ben Lamb to finish 3rd or higher at the Main Event, when it concludes next month.