As the Cardplayer Lifestyle poker blog reported back in February, this year’s World Series of Poker Europe (WSOPE) will be held in Cannes, France for the first time. After being played for the last 4 years at the Casino at the Empire in London’s Leicester Square, the WSOPE will be setting up shop at the Casino Barrière de Cannes Croisette and the Hôtel Majestic Barrière, which together boast double the playing area, with room for 75 poker tables. Increased attendance figures from last year are practically a given. 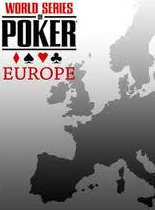 Bracelets will be awarded to the winners of each of the 7 events, and results will count towards WSOP Player of the Year standings, which has essentially boiled down to a 2-man race between Phil Hellmuth and Ben Lamb.

The action starts tomorrow with Event #1: €2,680 Six-Handed No Limit Texas Hold’em. The 6 other bracelet events to be contested over the next 2 weeks include:

At the conclusion of the WSOPE, the Caesars Cup will also be contested, which will see a Phil Hellmuth-captained Team Americas take on a Bertrand “ElkY” Grospellier-captained Team Europe in a series of 5 heads up and partner-format events. Other members of Team Americas include Daniel Negreanu, Doyle Brunson, Johnny Chan, and Huck Seed. Rounding out Team Europe are Dario Minieri, Gus Hansen, EPT Kiev Champion Maxim Lykov, and recent Poker Triple Crown (WSOP, WPT, and EPT) winner Jake Cody. The last Caesars Cup took place in 2009 and was won in convincing fashion by an Annette Obrestad-captained Team Europe.