Still think poker isn’t a game of skill? Tell that to the select few dozen who achieved remarkable levels of success against thousands of other poker players at World Series of Poker events this year. The honor of Player of the Year (POY) is given to the person who achieves the best overall success at the felt over the scores of bracelet events held in Las Vegas (WSOP) and Cannes (WSOPE) in a calendar year. This year’s race has featured multiple double bracelet winners, a new record holder for most times cashing in bracelet events, and an incredible five-final table performance by one of the game’s greatest players. Yet, with just two events yet to be concluded, the WSOPE Main Event and the Final Table of the WSOP, the race is still very much undecided.

Three Players with a Legitimate Shot

Phil Ivey was the POY race leader at the conclusion of the WSOP after having made an astounding five final tables. He was overtaken, however, by Antonio Esfandiari who took down Event #2 at the WSOPE about a week ago after winning $18.3 million in the Big One for One Drop earlier this summer. 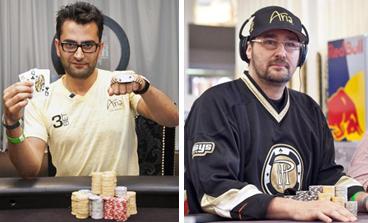 Esfandiari is the current leader but has a number of hungry players nipping at his heels, many of whom are still in the hunt at the WSOPE Main Event. Chief among them is Phil Hellmuth who holds the sixth-largest stack in play. Having added another three cashes to his record career total thus far at the WSOPE, Hellmuth notably won his twelfth bracelet this summer. He would need to finish in at least fourth place at the WSOPE Main Event to overtake the Magician and could lock up POY honors with a win or runner-up finish.

The person with the next best shot at winning POY is Greg Merson, who made the October Nine and also won a bracelet earlier this summer. To do so, and assuming Hellmuth gets eliminated from the race, he would have to finish in fourth place or better at the WSOP when it reconvenes at the end of this month.

Andy Frankenberger, Joseph Cheong, and Timothy Adams have an outside shot at taking the lead in the POY race. While Cheong or Adams would have to score a WSOPE Main Event win, Frankenberger would have to win or finish second. Either way, they’d also have to avoid any measure of success by Hellmuth or Merson. With 24 players remaining, Cheong, who memorably finished third in the 2010 WSOP Main Event, is the current chip leader.

Update October 4: With 4 players left in the WSOPE Main Event, Phil Hellmuth is now the leader in the Player of the Year race. Only Greg Merson can overtake him based on his performance later this month at the WSOP Main Event Final Table. If Hellmuth wins, he also locks up Player of the Year honors.

Admiring the persistence you put into your site and in depth information you provide. It’s good to come across a blog every once in a while that isn’t the same outdated rehashed information. Wonderful read! I’ve bookmarked your site and I’m including your RSS feeds to my Google account.

thanks Andrea – we do our best 🙂