Let’s take a look at a couple of the main stories that occurred over the past week at the 2010 World Series of Poker. 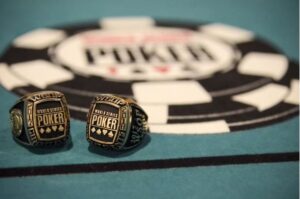 This year’s World Series of Poker $2,500 Mixed Hold’em event would see one of poker’s stars finally shine brightly on the game’s finest stage. Canada’s Gavin Smith, among the most beloved poker players, by poker fans and pros alike, steamrolled the final table on the way to his first ever World Series of Poker bracelet. Smith was able to take advantage of the limit Hold’em portions of the action, capitalizing on other players’ passivity while they were waiting for the no-limit Hold’em portions to come around.

Up until this bracelet win, Smith, the 2006 World Poker Tour player of the year, had won over $5 million playing poker. He further padded his bankroll with another quarter million+ dollars.

It’s basically a 2-horse race for this year’s coveted Player of the Year title. The contenders? Frank Kassela, this year’s sole double bracelet winner, and John Juanda, the veteran poker pro and crowd favorite, who has put together a sick run at the tables this summer. Though Juanda has not scored any victories at the 2010 WSOP, his multiple final tables have him in the hunt, and pretty much neck and neck with Kassela in total points accrued thus far. Kassela is currently in the lead, following his third-place finish in the $25,000 6-handed no-limit Hold’em event. Juanda can still retake the lead if he performs well in the remaining World Series events or makes a very strong showing in the $10,000 Main Event.