The Women in Poker Hall of Fame held a ceremony to honor its Class of 2022 inductees this morning welcoming Vanessa Selbst, Angelica Hael, Terry King, and Jennifer Tilly into the prestigious group of women who are formally recognized for their contributions to poker excellence – both on and off the felt. 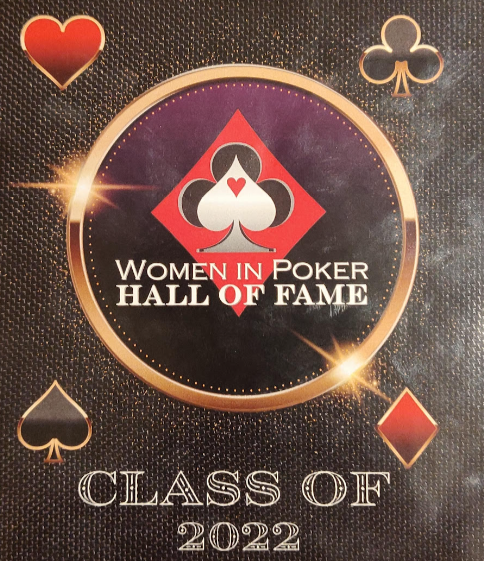 The four superstar talents were presented as the newest WiPHoF inductees in the PokerGO Studio, with a watch party simultaneously being held at TABLE ONE of the ARIA Las Vegas poker room. The induction ceremony was supported by several stand-out poker entities, including Playtika, PokerGO, the World Poker Tour, PokerStars, and the World Series of Poker.

The celebration coincides with the 2022 Women In Poker Winter Festival, which boasts the $200,000 Guaranteed, $1,100 buy-in WIP Championship event, an exclusive Bounty Tournament, and the WPT Ladies Passport Main Event, presented by the World Poker Tour.

Emceed by Women in Poker Hall of Famer Jan Fisher, the event was attended by almost 200 people there to represent and show support for the industry’s and game’s brightest female stars.

Three-time WSOP bracelet winner Vanessa Selbst has been instrumental in catapulting Women In Poker into the global spotlight since 2008, when she earned her first World Series of Poker bracelet for her performance in the $1,500 buy-in Pot Limit Omaha event.

From there, the Yale University graduate would amass over $2.1 million in WSOP tournament cash prize winnings, including her 2014 outright victory in the Mixed-Max No Limit Hold’em tournament for a take-home award of $871,148.

Overall, Vanessa Selbst is ranked in the Top 100 All-Time Money List for live poker tournaments with more than $11.9 million in career cash prize winnings, according to The Hendon Mob. In September 2010 alone, she won the Partouche Poker Tour Main Event for more than $1.8 million.

These days, the Brooklyn native moonlights as a casual poker player while dedicating the majority of her mental prowess to her day job as an options trader. While she was unable to attend the ceremony in person, Selbst sent in a heartwarming thank-you speech.

WPT Vice President of Global Tour Management Angelica Hael has been with the company for 13 years and has received numerous accolades for her knowledge and professionalism within the poker industry.

The lead developer behind the WPT Women’s Poker Initiative, Hael was recognized in April 2019 with a GPI Industry Person of the Year Award. The poker visionary is also the go-to talent for organizing the 2022 WIP Championship, which boasts a $200,000 prize pool guarantee ($1,100 buy-in NLHE re-entry) at the 2022 Women In Poker Winter Festival.

Hael was inducted by World Poker Tour CEO Adam Pliska, who delivered an incredibly touching speech that had most in attendance reaching for tissues.

Poker trailblazer Terry King caught the “poker bug” in the early 1970s – finally gathering up the courage to sit at a live poker table after watching her friend compete at the tables in 1972.

In 1978, King earned her World Series of Poker bracelet in the WSOP Ladies Championship, and would go on to become the first woman to ever deal in the $10,000 buy-in WSOP Main Event.

After moving to California, King competed as a prop player at the (now) Parkwest Bicycle Casino and served in the role of Shift Manager at the Hollywood Park Casino.

Known by many fans as a poker historian through her poker documentary efforts, King currently runs the Action Now Sports Poker Facebook page, where she regularly shares 50 years worth of great poker stories.

Beyond her on-screen achievements in the entertainment industry (including an Academy Award nomination for Best Supporting Actress in the mid-1990s), the Hollywood star is equally and fondly recognized by poker fans worldwide for her aptitude at the poker tables.

Tilly has accrued more than $1 million in live poker tournament cash prize winnings, highlighted by her June 2005 WSOP Ladies Championship bracelet victory. Her six-figure payday in the WSOP came just one year after finding her life partner – fellow poker player Phil Laak, who inducted her with a delightful and hilarious speech.

Tilly remains a fixture on the live poker scene after 25 years of participating in the game and supporting Women In Poker colleagues who have been cast to appear on popular TV shows such as the Celebrity Poker Showdown, Poker Night In America, and High Stakes Poker. 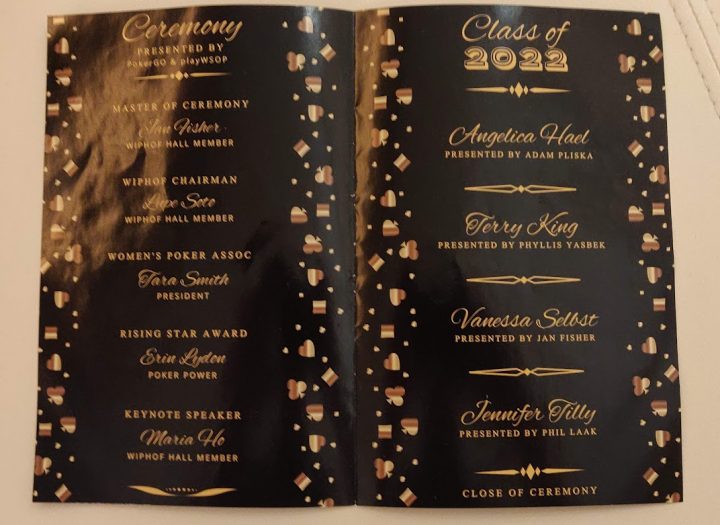 Less than 48 hours remain until the start of the 2022 Women In Poker Championship event in Las Vegas, which will feature a guaranteed prize pool of $200,000!

LATE REGISTRATION:  All registration closes at the start of Level 10 on ‘Day 1’

Players can earn their seats into ‘Day 1’ through in-person Satellite qualifiers that are scheduled in the Wynn Las Vegas Poker Room. Participants can also choose to buy in directly for $1,100 between now and the start of Level 10 on Friday.

If this year’s WPT World Championship festival attendance numbers are in any way representative of what women poker players can expect this weekend, the 2022 WPT Ladies Championship could easily attract a field exceeding 200 entrants.

Best of luck to all players who will be competing for their share of a $200,000 guaranteed prize pool in the WPT Ladies Championship the at the Wynn Las Vegas this weekend, and congratulations to Vanessa Selbst, Angelica Hael, Terry King, and Jennifer Tilly for their 2022 induction into the Women in Poker Hall of Fame!