Remember David Williams? Probably best known for his 2nd place finish in the World Series of Poker to Greg Raymer in 2004, for the last few years David Williams has been “a name player” without too much else standing out on his poker resume. Not that I feel bad for him – a $3.5 million win at the WSOP SHOULD last you a long time. 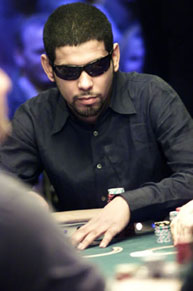 Anyhow, the name David Williams is once again on people’s lips, as this week he took down an almost 200-player field at the annual $25,000 buy-in World Poker Tour Championships for a score of over $1.5 million.

Aside from poker, Williams has a wide variety of interests, but he is sure to continue playing the game we all love and ponying up big sums at the felt for many years to come. His name will be one we remember for a long time yet, with this latest score and his runner-up 2004 WSOP Main Event finish just a couple of many highlights to be showcases from his tournament resume. Over time, we’ll also likely become that much more familiar with his back story, and maintain a rooting interest in his success.

The big story at this year’s WPT was the continued decline of the field size, down to 195 players from a high of almost 650 in 2007 – most likely due to the struggling economy that, apparently, has hit the “poker economy” hard, too. Fact is, any $25,000 event needs high rollers to survive. Perhaps, some day in the not-too-distant future, we’ll see $25K events happening on a monthly or even weekly basis. While that might be hard to fathom, with continued inflation and more players buying pieces of each other, it’s perhaps only a matter of time until $10K events become of less interest to professionals with ever-fatter bankrolls.

Whither the World Poker Tour?

Anyhow, while the numbers may have declined at this latest World Poker Tour Championship event, the quality of the field noticeably improved; as they say, only the strongest survive – and this field proved it!

Like any other poker company, the World Poker Tour will continue to have its ups and downs, but mark my words that this company will be around for years and years to come! Their events will get bigger yet, and attract an ever-growing audience all over the world tuning in to their broadcasts. Perhaps some day they may even have their own bespoke state-of-the-art studio from which to produce all their final tables, with Vince Van Patten and Mike Sexton thrilling us from the broadcast booth!

The top 10 finishers in the event read like a who’s who of poker, with greats such as Phil Hellmuth, Scotty Nguyen, and Poker Hall of Famer Billy Baxter among them. Throw in the always dangerous David Benyamine and reigning Card Player Player of the Year Eric Baldwin, and you could sure see the player to eventually collect all the chips would be no fluke. But when all was said and done, it was David Williams who emerged victorious over his elite poker compatriots.