Win your seat into the WPT World Championship just by playing 100 hands on WPT Global!

The WPT Global online platform has launched a new promotion where you can win a $12,400 package (tournament entry + travel expenses) to play in the 2022 WPT World Championship in Las Vegas in December.

What does the promotion consist of? From now until November 20th, if play at least 100 hands in WPT Global cash games you will have a chance to win one package per week. The more you play, the more entries you earn into the drawings. Plus, you can earn bonus Iron Man entries for reaching 100 hands on consecutive days. Play 100 cash game hands two days in a row and earn from 5 to 25 bonus entries. Play 100 hands a day for seven straight days and you’ll earn anywhere from 200 up to 2,000 bonus entries!

A number of great prizes will be distributed each week, including:

More ways to qualify for the WPT World Championship

More details about the satellites can be found in this article.

We recommend that you follow WPT Global on Twitter, as they are regularly running contests where they give away tickets to WPT World Championship satellites.

Also, many World Poker Tour ambassadors and well-known players will be holding contests during October and November with $12,400 prize packages up for grabs. One of the latest giveaways is that of player and author (and fellow Cardplayer Lifestyle contributor) Amanda Botfeld:

This is my dad teaching me how to play poker with lime green chips when I was 13. 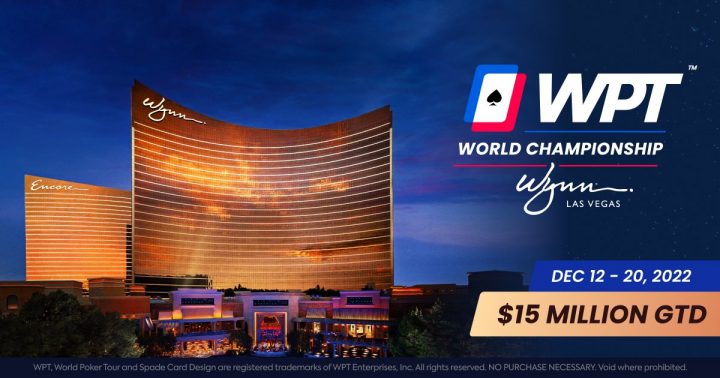 As for the WPT World Championship itself that so many players will be winning their way into via the aforementioned promotions, this tournament — which will close the 2022 World Poker Tour season — will be historic, as it will have a record $15,000,000 guaranteed prize pool.

Here are some of the marquee events that will be taking place during the festival:

You can see the complete schedule at this link.

Plus, get a behind the scenes look at all the prep happening to make it a one of a kind event! Be sure to check out our exclusive interview with Executive Director of Poker Operations at Wynn Las Vegas Ryan Beauregard and Vice President of Global Tour Management at the World Poker Tour Angelica Hael.

Our founder, Robbie Strazynski, will be providing in-person coverage of the WPT World Championship from Las Vegas. Now that you know all the ways you can qualify, it’s time to win your seat so you can join him!